It’s the world famous Edinburgh Festival Fringe and performers, audiences and artistes are ready and waiting for curtains-up.

Throughout the three-week extravaganza, some treats are a daily occurrence, some run for just a few days and some shine as a one-off. Daily shows include 30-minute comedy quips, silly sing-songs and animations for little‘ uns, and hard-hitting drama to get guests in to a soul-seeking mood.

Come 11am, this little city is already alive with a festival spirit as theatres open doors and street performers get into their grooves. The Royal Mile is lined with off-duty actors handing out fliers with unbridled enthusiasm, while the Half-Price Hut dishes out discounted tickets to a jolly orderly queue; for all the cosmopolitan atmosphere, we are still in the UK, after all.

Venues are scattered around the city centre and beyond with many just minutes away from each other. The culture-hungry scurry from stand-up in an underground cocktail bar to an improvised musical in the Merchant’s Hall. Or some stroll the historic streets searching for freebies and watching whatever catches the eye.

Aussie acts are heading over in their droves, including TNT interviewees Axis of Awesome (see next month’s issue) and Brendan Burns, so you can find a slice of home in Scotland. After dark, the comedy gets just a little bit naughtier, theatre gets ghostly and revellers kick up their heels at Ceilidh dances.

Most evenings see the iconic Edinburgh Castle swathed in the sounds of bagpipes at the Military Tattoo. A thousand pipers, drummers and dancers put on a display of traditional tunes and contemporary movement, culminating in a blast of fireworks from the castle ramparts. It’s a quintessentially Scottish end to the day, and just the inspiration you’ll need to do it all again tomorrow.

How did it begin?

Back in 1947’s post-war Britain, the Edinburgh International Festival was born in a bid to celebrate diverse European culture. And, y’know, to cheer everyone up a bit. Alongside this, a bunch of theatre troupes turned up uninvited and performed on the streets and in unlicensed venues, and nobody went to much effort to stop them.

The next year a whole load more followed suit and the Fringe gathered momentum and morphed in to the all-encompassing song and dance that we see today. Now it’s a bit more official, with tickets and a society, but there is still an event for every inclination and budget. Performances remain uncensored which can, at times, bring the organisers out in a rash.

Get in the spirit:

There’s no obligation to wear tartan – although kilts are obviously encouraged. Characters come dressed in all kinds of costumes, Scots or not, and you can join them without anyone batting an eye. For a real taste of Scotland, many of the restaurants serve a menu of local grub. Get stuck in to black pudding and haggis with a Michelin star attached.

Whisky bars run tasting evenings, but most of the city’s bartenders will be able to talk you through their tipples, and pubs on every other corner serve a range of locally brewed beers. Be aware that some bars don’t allow fancy dressers in. Also remember that there is no better hangover cure than a deep-fried Mars bar. 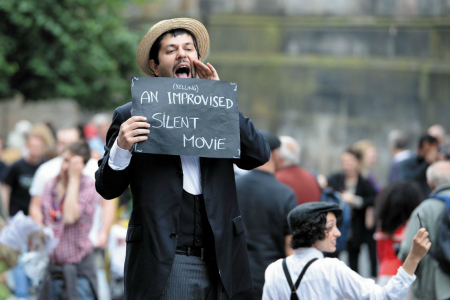 The Fringe is ridiculously popular with locals and tourists alike, so accommodation can get quite pricey. Hostels will be buzzing and especially sociable, or groups can look for self-catering apartments to share. For the same reason, there can be quite a lot of queuing involved, whether it’s for tickets, drinks or just a cash point. Also, some of the more popular shows are likely to sell out, particularly those with celebrity names attached.

That said, the atmosphere is electric and spirits are high, so just relax and enjoy it. In bonny Scotland the weather is predictably unpredictable, even in August. A well-prepared festival-goer will have sunnies, sandals, wellies and a raincoat at the ready at all times.

Edinburgh is immersed in a festival fever that is tricky to avoid, but there are still bits and bobs to do outside of theatre-land. It is home to loads of museums and art galleries, or you could take a day off to explore the castle before the troupes of pipers descend.

Day trips whisk explorers away from the bustle and off to the highlands and lochs that inspire Scottish creativity. Some even traipse around the distilleries sampling a dram at every stop-off.

If you’ve got a sunny afternoon to spare, take a hike up to Arthur’s Seat for sweeping views to the castle, the city and the Firth of Forth beyond.

Peru is home to epic surf and shamans