So you can imagine the triumphant fist pumping that occurred when I was told I would be attending Calling Festival at Clapham Common. Post festival blues be gone.

Running annually since 2006 and previously under the name Hard Rock Calling Festival, this was the first year it dropped the ‘Hard Rock’ due to sponsorship withdrawals. This is perhaps why it’s gone from 3 stages to 2 but with such heavy weights as Stevie Wonder and Aerosmith headlining did anyone even notice? Doubtful.

So off I went to attend Saturday’s festivities recovered liver in tow and full of hope that I would experience a great day of good old fashioned rock and roll. I was not to be disappointed. Even the frequent (and often torrential) downpours didn’t dampen the spirits of festival-goers on this dreary Saturday in London. Rockers turned out in force, booze filled paper cups in hands, and in their thousands. 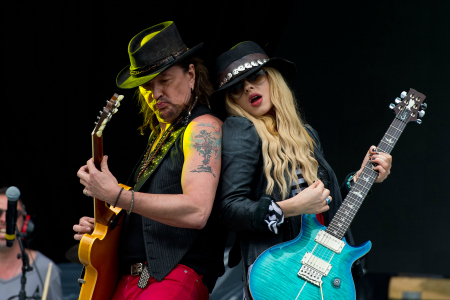 So what about the music I hear you ask? First of the big names to grace the main stage was Richie Sambora (the estranged Bon Jovi guitarist in case you’ve just arrived from Saturn). Now while clearly a bit of a whizz with his instrument, he just isn’t really much of a singer and you felt yourself longing for Jon Bon Jovi and his giant perm to stroll on and take up the mic when Sambora grunted through 80’s Bon Jovi classics Dead or Alive and Lay Your Hands.

Thunder, who were next up, were missing guitarist Ben Matthews due to recent tonsil surgery so instead Peter Shoulder, friend of the band and guitarist in The Union, was the very competent stand in. Thunder would perhaps be more familiar to rock fans of the late 80’s/early 90’s as this is when they had some of their biggest hits but casting your eye over the crowd it was obvious to see that both younger and older music fans couldn’t fail to be rocked by this awesome 5 piece. Thunder performed their music with as much energy as a band half their age but exuded a class and confidence that can only be gained with experience. 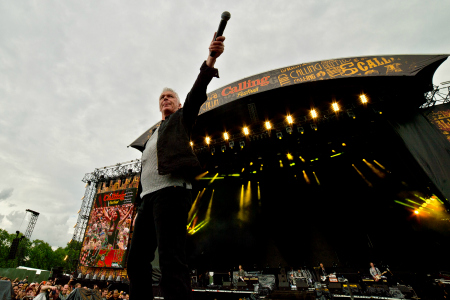 On a sad note, the trend of charging extra to be within a chance of being close to the action at these types of events seems to be growing and loyal fans who can’t afford to pay those fees are left slightly in the cold as a result. Are you a VIP because you can afford to pay more money to stand in a large fenced off area closer to the stage? Thankfully the bigger festivals aren’t doing this yet. Let’s keep our fingers crossed that this practice doesn’t catch on further. 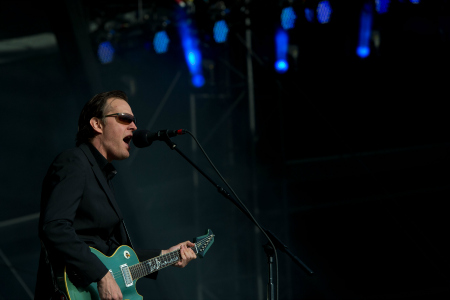 The hugely talented Joe Bonamassa was another big hit

Next up was the bluesy, soulful and seemingly nice man of rock, Joe Bonamassa. Don’t let his mild mannered stage persona fool you – the man is a vocal and instrumental powerhouse. Wherever Joe is taking you musically, trust me, you wanna go, willingly. With a humble bow and introduction to his awesome band he was off and judging by the screams and applause that followed, those who may not have heard of the man previously appeared to be left with a pretty good impression.

But of course the night really belonged to Aerosmith with their impressive back catalogue of crowd pleasers so epic it gives Michael Jackson a run for his money. From the first familiar strains of Joe Perry’s guitar we knew we were in for a treat. A leather clad Steven Tyler strutted onto stage like a proud peacock and anyone who was in doubt about the front mans vocal abilities after years of smoking and well documented substance abuse would’ve soon had their fears put to rest. Tyler’s familiar screams and yowls had the hairs on the back of your neck standing at attention from the opening lines of Mama Kin to the spine tingling beauty of Dream On in the encore. Fans were treated to such hits as Walk This Way, Love In An Elevator, (Dude) Looks Like A Lady and a lesser performed fan favourite Ragdoll which was absent from their set at Download two weeks previous. Upon hearing the opening chords of their mega hit I Don’t Wanna Miss A Thing the place erupted even further with lighters being held aloft, couples and friends embracing and, obviously, some karaoke style wailing from us all. A final encore of classic songs Dream On and Sweet Emotion (complete with Tyler playing a white grand piano and Perry climbing on top for his guitar solo) we were all left breathless as white confetti showered over Clapham Common and the band took their bows. 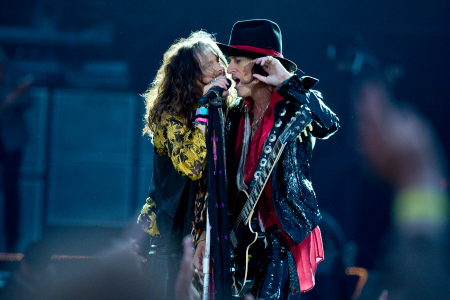 Unfortunately getting home from the event wasn’t as straightforward as our arrival. Yes we hung back a bit to avoid the stampede but it was certainly no more than 15 minutes. We then discovered all three tube stations at Clapham had been closed and a policeman that I spoke to seemed just as bewildered as us by this turn of events. Perhaps the high volume of people presented a safety issue? Oh well. Hurrah for the bus (never thought i’d say that).

With the sound of the self styled ‘Demon of Screamin’s’ voice still ringing in our ears we made our way home and tried not to contemplate the inevitable post festival blues that would greet us the following morning (we weren’t able to attend on the Sunday and see the great Stevie Wonder – sad face). Can’t we just do it all again next weekend?!