The man with the world’s first full face transplant stepped out in front of the media for the first time today and spoke some words of thanks to his donors and doctors.

The 31-year-old Spaniard had been left with no face after accidentally shooting himself in the face during a hunting trip four years ago. The man, known only as ‘Oscar’ was left unable to breathe, swallow, or talk.

Nine previous attempts to rebuild Oscar’s face failed and he spent five years living with a gaping hole where his mouth and nose should have been.

However, today Oscar spoke out to the world after a pioneering 24-hour face transplant operation which has enabled him to drink, eat and talk again.

“I’m very happy to be here and I wanted to express my gratitude to the hospital and medical team and to all donors in Spain especially the family of the man whose face I received,” he said.

The operation, on March 20, is the first complete face transplant to be carried out anywhere in the world, transplanting new cheekbones, skin tissue, facial muscles, teeth, palate, skin, nose, lips and jaw and eyelids.

Pere Barret, head of the 30 strong surgical team who carried out the face transplant, said:

“He has readily accepted his new face with no difficulty. A few days after the operation he saw his reflection and was able to recognise himself and this will help him return to a normal life.”

Since his face transplant, Oscar has regained feeling in most of his new face. He can now move his eyebrows, upper eyelids, jaw and external part of cheek muscles but has limited movement of his mouth and cannot yet shut his eyes. He will have to take immunosuppressant drugs for the rest of his life.

The identity of the donor is to be kept secret and doctors say that Oscar does not closely resemble him. 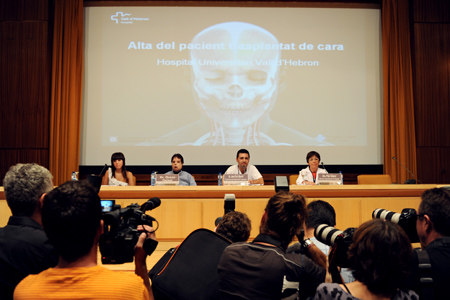 Films on Fridges, The Yard