Suriname-born Duth fighter Bonjasky was felled in the second round by Spong, a newcomer to the exciting K1 discipline who replied to a high left knee to the head from his opponent with an overhead right that knocked him out.

Three-time K1 World Championship holder Bonjasky’s nickname may be The Flying Gentleman, but for the 37-year-old veteran this fight will be remembered for his falling midway through the second round, and the spectacular arrival of Spong.

“Remy Bonjasky is a legend in the sport,” Spong said. “It was a hard fight and I know now why he was such a dominant champion.”

Bonjasky was fighting for the fourth time since his return from a three-year lay-off and said he’d “given everything”.

“It’s hard when your 37 years old and trying to make a comeback, but all credit to Tyrone,” he said.

“I don’t know [what’s next] yet. It’s hard to make a good comeback. My comeback has been rocky. I’ve done my best, I’ve done everything, but my body says it’s hard.”

Bonjasky at least has plenty to fall back on – he has a background in banking and also works as a model. 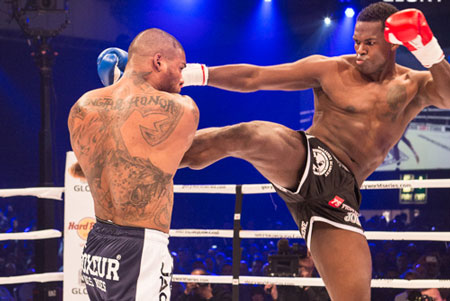 The less glamorous but now highly regarded Spong, aged 27 and of the same heritage as his opponent, is eyeing off his next challenge.

“I want to build my legacy in this sport and I am ready to take on anyone in the heavyweight division,” he said.

“In two weeks there’s a fight between Gokhan Saki and Daniel Ghita at Glory 6 in Istanbul. I want to fight both of those guys and I’m also ready to go straight in to a heavyweight title shot against Semmy Schilt.”

Earlier in the night, Aussie Steve “Stone Cold” Moxon lose on points to Brit Jordan Watson in the lightweight division.

A Cold Morning In Wales

Scots get the yes vote… in bed