Foo Fighters did battle with the extremist Westboro Baptist Church this weekend, singing a song about “man muffin” to a crowd of anti-gay protestors in Kansas City.

The Foos were due to play a gig when they discovered they had become a target of the hate church. 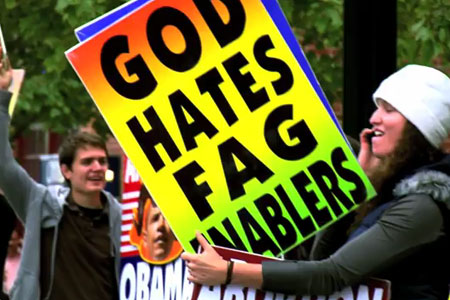 Members of Westboro Baptist Church were picketing the gig, carrying placards reading, “God hates fags” and other such enlightened messages. The Foo Fighters have fallen foul of the ‘church’ for their Hot Buns video (below).

Slipping into hillbilly costume, Dave Grohl and band pulled up on a flatbed track to confront the demonstration.

"Driving all night, got a hankering for something. Think I'm in the mood for some hot man muffins/ Mmmm, sounds so fine, yes indeed," Grohl sang.

Westboro Baptist Church got its knickers in a twist over the Foos’ tongue in cheek, homoerotic video in August.

"The entertainment industry is a microcosm of the people in this doomed nation: hard-hearted, hell-bound, and hedonistic," leader Fred Phelps wrote on the church's website.

"[The Foo Fighters] have a platform and should be using it to encourage obedience to God; instead they teach every person who will listen all things contrary to him: fornication, adultery, idolatry, fags."

Youtube users are full of praise for the band’s humorous response to the Westboro demo.

“They claim to be a church but they're really just an anti gay cult. Props to the Foos for peacefully fighting hate with music!” said one.

“Foo Fighters, you are BRILLIANT. It is impossible to imagine a more effective way to send a public message both TO and ABOUT these misguided followers of the horrible, utterly evil, Fred Phelps.” Another wrote.