Gary Barlow and Robbie Williams say the X Factor age limit should be increased after a 16-year-old contestant broke down during his performance.

The Take That pair looked worried as Luke Lucas burst into tears during his audition after messing up his lines.

Afterwards Barlow said that many 16-year-olds would not be mature enough to deal with the pressure of the X Factor.

"Sixteen is just too young to be in a competition with this kind of pressure,” he said.

Although Williams joined Take That at 16, he said he would hesitate before putting his own kids into the public eye so young.

"If it was my son or my daughter I don't think I'd be pushing them that early,” he said.

"Eighteen or 19 maybe. You've found yourself; you've left school, hung out with mates, earned some money.

Children’s charities have backed their call for a heightened age limit on X Factor, suggesting that contestants should be 18 rather than 16 to appear on the show.

Teenager, Luke Lucas’s breakdown comes hot on the heals of an outcry over an alleged “bullying” episode of X Factor in which 54-year-old widow Ceri Rees was shown struggling through a disastrous audition for seven minutes of the show. 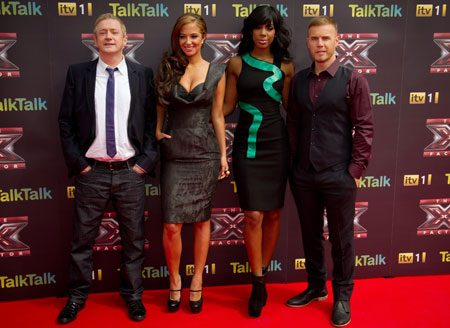 Meanwhile, the final 16 contestants have now been revealed after judges made their selection of those who will go through to the live finals.

Group mentor Tulisa Contostavlos picked Nu Vibe, 2 Shoes and Rhythmix. She also chose Charlie Healy, lead singer of losing band The Keys, and put him through to the live finals as part of rival boyband The Risk.

In Louis Walsh’s Overs category, Kitty Brucknell, Johnny Robinson, Jonjo Kerr and Goldie Cheung were put through. However since Cheung has quit the show and was therefore replaced by Samantha Brookes.

The final 16 will sing live on The X Factor in a two-and-a-half hour episode next Saturday at 7.30pm on ITV1.