I get cold very easily, am a restless and light sleeper, and don’t like traipsing to far to the toilet in the middle of the night. For this reason, camping has never really appealed. To be fair, the only time I have ever camped has been at music festivals, where the loud revelling and acute hangovers don’t help matters.

But I do love nature, and with parents who grew up on a farm, and my grandfather having been a shepherd, I’m sure it’s in my blood somewhere. So what about glamping? Especially on somewhere as whimsically and wonderfully named as Featherdown Farms. I’ve been receiving their brochures for many years, evoking dreamy visions of frolicking sheep, fresh laid eggs, healthy ruddy cheeks, but never made it. Carpe diem Francesca – off to Scotland to find out.

We’re spending a week in the Borders, at Chester’s Estate, one of many farms running Featherdown Farms camps on site. The private 18th-century estate was inherited by John and his wife Ellie only a few years ago, and as corporate city slickers in a former life, they quickly had to get up to speed with the farming life. Running a successful farm, holiday destination and events has been a learning curve, but one they have been successful at.

The estate itself is a delicious maze of delightful nooks and crannies in which guests can enjoyably lose themselves from the world, and is home to more than 1,000 sheep, 100 cows, roe deer, pheasants, partridges, buzzards, rooks and myriad rabbits, as well as a run of salmon, sea and brown trout for fishers out there. Bikes are available for hire, and you can even take the estate boat along the river.

En route, it’s easy to see the attraction of the Border regions. Hills slope off like lush magic carpets, the purple heather fizzes in abundance, and even the clouds have an ethereal haze. The landscape is dotted with small castles and towers, testament to the tumultuous history of this area which has been fought over and desired for thousands of years. There is a sort of treasure hunt quality – there’s always a feeling that something beautiful is to come, but it’s still a surprise when it does.

John meets us at the ‘car park’ – the old stables. Rumbling down a bouncy path with our luggage in a wheelbarrow, through some trees, across a walled vegetable garden and past a croquet lawn, I was curious as to what we were to find. The idea is that you leave your car and your normal world behind, and as we trundled along it felt like that. But as soon as we step through the safari canvas and on to the wooden floor boards of what was to be our home for the next few nights that slightly fearful anticipation I’d dismissed as travel sickness turns into happy fascination. 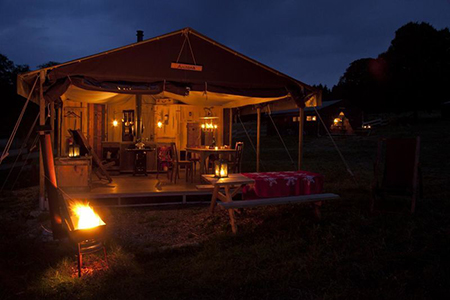 Already there seems to be more space to breathe.

The tents are actually quite large. All tents have three bedrooms, and a little cubby hole bed to hideaway in, with proper beds, mattresses and duvets. It does get chilly though, especially in England’s weird and wonderful weather.

The kitchen is fully equipped, with cold running water, and I was thrilled to discover the flushing toilet! A large farm table makes for a nice centrepiece, although the verandah, hammock and outdoor barbecue are perfect for better weather. And for those in the upgraded ‘Frills’ tents there is even a private hot tub – although being coal powered you need to plan a few hours in advance.

Anything you have not brought with you can be acquired from the ‘bothy’ – the local supermarket, if you will. In this stone building sits a repository of goods that you might need during your stay, such as vegetables and fruit grown in the garden (which you are also able to pick for yourself), pasta, tinned tomatoes, milk, bacon, eggs, and of course wine and beer. The latter is produced by the on site brewery, and varieties include Foxy Blonde, Game Bird and Dark Horse.

The Scottish Borders Brewery was set up by John in February 2011 to make use of the malting barley growing on site and having plenty of water (being Scotland) and their tagline of ‘from plough to pint’ reflects the local provenance being of important. Run on an honesty box basis, the bothy is another indicator of that bygone era that Featherdown evokes.

The simple pleasures really are magnified. A lazy evening reading became magical with the addition of tea lights in a swinging lantern suspended above the sofa. A simple dinner of rice and fish seems to be all the more well-earned when cooked on a hot log burning stove. And with no television or internet we were playing card games and doing crosswords. Even talking to one another. Being off grid means that the phones can’t be charged every three hours as they demand, and so we simply stopped using them as much.

The log burner takes a while to get going, and goes out over night. My friend, being a man, makes it his job to be responsible for the fire and gets up early every morning to heat the tent before we go about our day. In fact, he is insistent that he must take on the role, and at one point I even hear him utter “should have brought an axe”.

It’s brought out the best in us, and our days are filled with exploration. A few miles away is the town of Melrose, the start of St Cuthbert’s Way and situated under triple peaks of the Eildon Hills, where we go for many a long country walk. The trail of Walter Scott lets us explore Smallhail Tower, Kelso and Abbotsford, his vast home. The local town of Ancrum is a pretty little place to meander, and the closest town Jedburgh is home to a fascinating museum revealing the history of the area, and the priory dating from 1138 is remarkably well preserved.

But it’s our tent, Chesters, and the Featherdown experience which really steals our heart. I’m still not sure on camping, but glamping – sign me up!

For more trips to Scotland see our trip itineraries on offer at TNT Tour Search.