Going Down: We go about gaining a PADI Open Water diving course in Cairns

Although I’d come to terms with the fact I’d never have a beautiful tail, nor a spear-throwing king as a father, thanks to steel tanks filled with compressed gas I was about to discover what life was like under the sea. And where better to follow in Ariel’s footsteps (if she had any) than the Great Barrier Reef.

Not only is it one of the seven wonders, but also the largest coral reef system in the world. It consists of over 2,900 individual reefs and 900 islands stretching for 2,600km. Basically it’s a big mother f***ing reef that spans the coast of Queensland. I was just krilled (sorry) at the prospect of exploring it. Scuba diving is not the sort of activity where they just plop you into the sea to see whether you sink or swim (although bear in mind it is actually better to sink). The first two days of our five-day PADI course made me feel confident about swimming with the big fish. There are a few quizzes, some rather amusing videos to watch and of course some pool practice to be done.

Tank hoisted over my back, buddy at my side, I waited tentatively for the instructor to go down (oh do behave!). Deflating my BCD (buoyancy control device) it was time to take my first breath underwater. A few wheezes later and… I was dying. Sadly those around me were still alive so I felt I couldn’t give up by going up. I gradually let my lungs fill with oxygen and a minute or two later the sucking felt second nature to me (stop that).

Whilst underwater activities ran smoothly, the same could not be said for the poolside ones. Note: if you’re wearing a flimsy bikini your right boob just might pop out in front of everyone when the instructor helps you out of your wetsuit. It may be embarrassing but it does help knock barriers down and if you have nice boobs it may help you to mate (I mean make) friends. On boarding our luxury boat I was greeted by a sumptuous breakfast. Apparently as well as being on a diving trip this was also an eating trip. Our very own chef would cook our five meals a day (well, scuba diving is tiresome work).

On reaching our first diving site I shortly found myself on the edge of the boat. I plopped into the sea and sank rather elegantly to the bottom. Okay, it wasn’t that elegantly. Primarily because I was yet to get over the fact that I’d landed the wetsuit with a giant hole over my arse (my fault for thinking that I was slimmer than I am). Thankfully I soon realised that the nips at my butt were the boys messing around, and not piranhas.

Self-consciousness in check, I could take stock of the underwater paradise that floated around me. Drifting over coral we saw a number of fishes doing their fin. My inability to find Nemo was quickly forgotten when we stumbled upon a giant turtle. Our instructor went up to pet it and in a jealous rage I vowed that soon I would be shaking hands with a turtle. 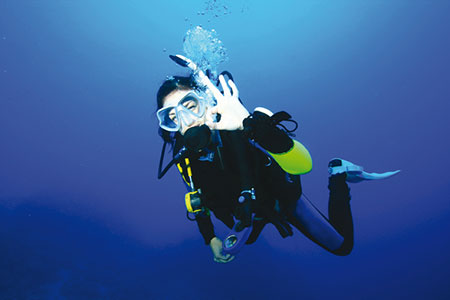 Near the end of our first dive we spotted a white-tipped reef shark. Yes, you know about sharks. However, it looked pretty harmless snoozing on the sea-bed. Despite being calm around Jaws I wasn’t happy to be told that partners in crime Sharky and George had been on my tail throughout the dive (perhaps the nips on the ass weren’t the boys after all!)

Day two at sea and I ditched the instructor and set off with a buddy. Turtles of the ocean – I’m a coming to get ya!
It was our first independent dive and never had it proved so easy to find my man. Mr Turtle was patiently waiting
to greet us on our descent.

Like a tiger hunting its prey I sleekly approached him. Mr Turtle didn’t blink and despite an urge to tap on his shell to get his attention I remembered that you weren’t meant to provoke the animals of the sea. Boring. Night prowler 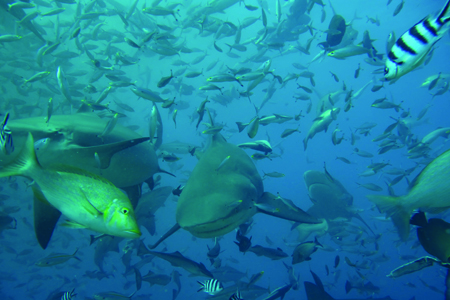 So we’d dived at day but could we do it at night? No problem I thought. But that was until I saw the sharks nibbling on our leftovers at the back of the boat. Other than the party glowsticks that identified each diver we were just given a few torches.

Standing on the side of the boat, about to jump into the darkness filled of sharks, stingrays and whales of Jonah-esqe proportion, I thought, “how effing awesome is this?” Below the water it got even better.

It was like some crazy underwater horror film, incredibly surreal and exciting. Torches flashed here and there, faces looked at each other with panic and big fish swam by pretending to be sharks. Although we didn’t spot any more sharks, the dive was definitely one of the most freaky things I’ve ever done.

Three days at sea and many glorious dives later it was time to head back to Cairns. I was officially now the Little Mermaid.

The damage & the details: A five-day Learn to Dive Open Water PADI course with Pro Dive Cairns (07 4031 5255), including nine dives and three days/two nights on a liveaboard boat, costs $825.