Space, we’re told, is the final frontier. It’s endless, barely explored and a home to the unknown. But best of all, it’s somewhere we might just experience for ourselves within the next few years, if we can get our hands on a spare quarter of a million dollars of course.

For now, however, I’m content. I’ve travelled to another planet without leaving our world. I was in South America last time I checked, but now I’m on Mars it seems. Or at least the Moon.

I’m breathing without a mask and walking without gravity boots, but my surroundings are alien. No people are in sight, only craters, dunes and craggy peaks. The colour palette is minimal – just reds, whites and oranges, under an untainted ocean of blue. It’s stark and brutal, but most of all, it’s utterly gorgeous.

It’s then that a tourist cycles past, bringing me back down to Earth – this place might look like Mars, but it’s actually the Atacama Desert in northern Chile.

The harsh beauty of deserts never fails to amaze me, but none I’ve witnessed can top the Atacama. Quite literally, in fact, as it’s the highest altitude desert in the world, sitting around 4km above sea level. It’s also the driest, with some sections having seen zero rainfall since records began. Yes, zero.

This otherworldly landscape, full of volcanoes, salt lakes and geysers, is also perfect for outdoor enthusiasts, as I’ve been discovering. The desert’s main tourism hub is laidback San Pedro de Atacama, an historic oasis town full of hostels and tour operators where the stats for population and altitude produce similar numbers. 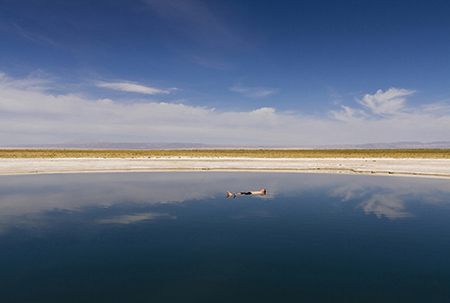 I’m staying a few clicks from the action, at luxury hideaway Alto Atacama. It’s a place with a passionate respect for the surrounding environment, starting with the hotel’s intelligent design, blending seamlessly into the Cordillera de la Sal, as the salt mountains next door are known.

It’s also a place that takes indulgence and pampering to another level, while still having a travellers’ spirit of adventure at heart. As such, the Alto has arranged a series of roadtrips, treks and mountain bike expeditions to help me see the area, and I can’t wait to get cracking.

Easing my way into the high altitude conditions, I start with a gentle bike ride across the Salar de Atacama, Chile’s largest salt flat, to one of the region’s more picturesque salt lakes, the Laguna Cejar. The journey is thankfully easygoing, allowing me to take in the backdrop; a jagged white plain that rushes for the horizon, only to be blocked by the brooding might of the giant volcanoes of the Andes, hiding Bolivia beyond. It’s spectacular stuff, but is quickly surpassed when my destination comes into view.

Dazzlingly blue, the salty sinkhole is like a splash of colour dropped from the paint pot sky onto a blank canvas landscape and, even after just an hour’s ride through the desert, it’s hard to imagine a more welcoming sight. So in I plunge. Immediately, I wish I’d ridden a little harder, so icy is the water.

But as the numbness kicks in, so does the salt – this is South America’s answer to the Dead Sea and I’m bobbing merrily on the surface. It’s a magical feeling, if you can blank out the icy out-of-breathness, helped even more when a pink flamingo flies overhead. 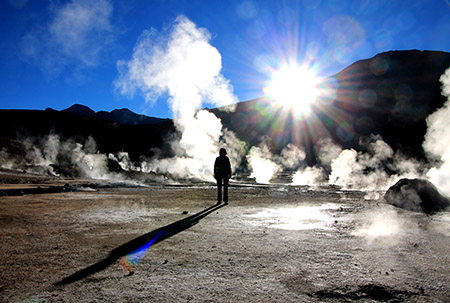 Back at the ranch, I opt to clamber up the rocks looming over the Alto, where perched up high are the remains of an old fortress.

Built by the Licanantay tribe in the 12th Century to protect their water supply, the Pukara de Quitor fortress was home to some hardy locals, people who chose to farm corn and raise llamas in one of the most inhospitable places on the planet, while spending centuries repelling the Incas and then the Spanish to protect their right to do so.

However, like a chapter straight from A Game of Thrones, the end eventually came, and it wasn’t pretty. Finally victorious in 1540, the Spanish were in no mood for dealing with reprisals. As a warning, they beheaded 300 locals and crowned the fortress with their heads, thereby creating the area’s new nickname, ‘Village of the Heads’. The message, it seems, is that life in the desert is never easy.

The next morning I’m up before dawn, driving 90km north to El Tatio, the highest geysers in the world. With temperatures hovering around -10°C, before considering the added joys of severe wind chill, I’ve left an empty bag in my room to travel Michelin Man-style, layered up to the max. I’m still shivering, but it’s not important, the geothermal field is a sight to behold.

Located 4,320m above sea level, it’s a place where freezing subterranean waters collide with hot volcanic rocks, creating a build-up of pressure that squeezes through some 500 holes in the Earth’s crust. Spouting, bubbling and rushing from the ground at around 85°C, the water hits the cold air causing steam to shoot 10 metres high.

Despite the extreme cold, it’s an epic vision, especially as the day’s first rays of sun peek over the Andes, giving the dragon field an even more ethereal quality. Munching a picnic breakfast among the towers of steam, it’s hard to imagine a place where the raw power of nature is more clearly on display. 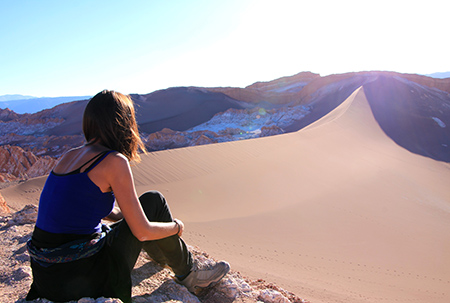 And so the days continue in this most dramatic of destinations. Exploring the desert by light, before returning to enjoy the night skies and Pisco Sours in comfort each evening. One day I cycle through the Katarpe Valley, crossing San Pedro River to Devil’s Canyon, where I must duck and slide between the high walls of salt, clay and gypsum.

Other times I hike through dried up riverbeds littered with cactuses, my eyes peeled for foxes, condors and the ever-present llamas. We even drop by a James Bond set in the form of Machuca, a tiny and remote village used in Daniel Craig’s Quantum of Solace.

My final stop is perhaps the most memorable (although the competition is tough), as we venture into the Valle de la Muerte and Valle de la Luna, or Death Valley and Moon Valley. So alien are these landscapes that I’m not surprised to learn NASA are regular visitors, keen to test their Mars gadgets in a similar environment. We puff our way up giant dunes to admire the view of salt towers that dot the arid ridges.

Then, with the sun dipping, we make our way to the high-up rocks overlooking Moon Valley. Once there, and with the wine now free-flowing, it’s simply time to sit back and enjoy the show, as the blazing sun drops into the lunar foreground. As sunsets go, it’s out of this world. 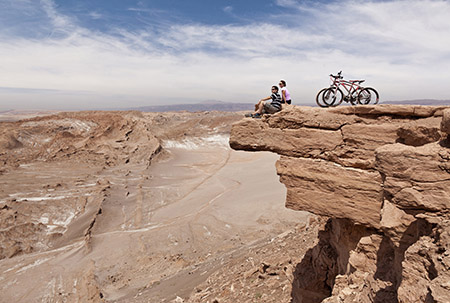 In this part of the world, however, the descent of darkness means the show is far from over. The combination of high altitude, very dry air and almost zero light pollution means there’s no better place on the planet for a bit of stargazing – indeed, it’s for good reason that the most expensive telescope on Earth, the $1 billion ALMA, was unveiled in the Atacama just last year.

As luck would have it, the Alto is also a fan of the night skies and has invested in its own hefty 16in telescope. It’s the first time I’ve ever experienced proper stargazing equipment and, as the craters on the Moon come into focus, I’m hooked. By the time I spot Saturn’s rings, I’m totally sold.

It might be a while before I can buy that ticket to space, but, for the time being, I’m more than happy with our very own alien world.

Where to sleep: Stays at the Alto Atacama (www.altoatacama.com) cost from £342pn.

Boasting about how sexy you are on the Internet, gives you the same buzz as sex