Going to extremes: Escape your boring 9-5 with adventure sports in London

Roll up for these killer adrenaline-fuelled events that will take you so close to death, you’ll never feel so alive …

Team GB may have dominated in canoe slalom at the Lee Valley White Water centre, but post-Games the brave can try the course for themselves – aboard a raft (half-day experience £49).

This 300m white- knuckle ride includes 13,000l of water, pumped into the river at a speed fast enough to fill 75 bath tubs a second.

“There is a fairly high chance of falling out of the boat,” rafting instructor Paskell Blackwell says.

Blackwell’s a pro; he’s been rafting for eight years and captains the British national team.

He helps up to nine people ride in each boat and if they follow his instructions, buzz-chasers will lower the chance of capsizing and bounding down the rapids, sans boat.

“Ultimately nature will decide how each trip maps out and as an individual you just do your best to perform in the environment,” Blackwell explains.

“People love the feeling of being a little out of control, soaking wet and very nervous. They’re so pleased to have succeeded and, more importantly, to have survived!”

If, after that, you haven’t had your fill of water-based adrenaline, east London is now home to one of the most thrilling board sports – wakeboarding.

Riders reach speeds of up to 30m/ph and hit obstacles, grinds and ramps while attempting tricks in mid-air. 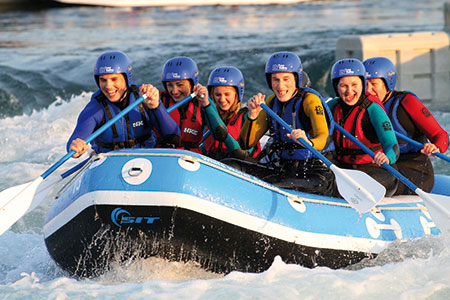 The new WakeUp Docklands cable park offers the chance to have a go at this exhilarating sport.

This month the centre is offering special 20-minute taster sessions, as part of the Newham Waterfront Festival (September 29, 2pm-9pm, £10 per session).

“Wakeboarding can be dangerous, but that just adds to the buzz of it,” says wakeboarding instructor Jack Ginty, from Wakeup Docklands.

“Try wakeboarding once and you’ll be hooked; all you’ll be thinking about at work is landing your next trick.”

During the Newham Waterfront Festival, the public can also try riding high-speed boats or watch pro wakeboarders, such as Matt Crowhurst and Scott Broom, showcasing their skills.

Plus, stick around for an epic fireworks display in the evening. If you like your excitement a little drier, try stepping off a 160ft-high platform.

This month, up to 600 thrillseekers will take a leap of faith from a crane in front of London’s iconic Tower Bridge (September 29-30, £75 a jump).

This London bungee jumping event happens once a year, and as you plunge towards the ground, there’s nothing except a stretchy cord stopping you from hitting the deck.

Aussie Heather Rowland has bungee jumped in six different countries. “I’m hooked,” she says.“You get the major jitters; adrenaline pumps around your veins. It’s such a rush.”