High times: this is Amsterdam in 48 hours

09:00 Start your day exploring Amsterdam’s more high-minded offerings at the Van Gogh Museum (admission about £9) – there’ll be plenty of opportunities to actually get high later.

The prolific Dutch painter, who created more than 2000 artworks over little more than a decade, was a colourful character who notoriously sliced off his own ear and, in 1853, fatally shot himself.

Just as colourful are his seminal post-Impressionist paintings, the most famous of which you’ll see up close here, including Sunflowers. 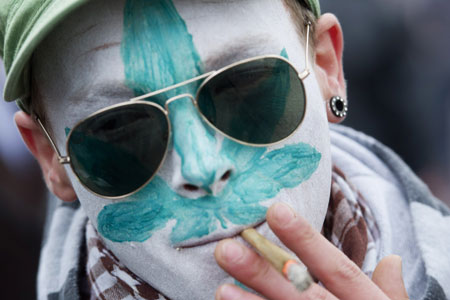 11:30 Amsterdam is easily one of Europe’s best-looking cities, so don’t spend too long cooped up inside. A great way to admire its multifarious architecture – think gorgeous Gothic and Renaissance buildings nudging up against beautiful Baroque and Art Nouveau creations – is from its network of picture-book-pretty canals. Hop on a boat cruise (from about £11) and start snapping.

14:00 Time for some history. The perennially popular Anne Frank’s House (admission about £7.50)  makes for a thought-provoking trip into the secret space in which the Jewish Frank family spent silent days hiding in Forties occupied Holland. You’ll even see Anne’s famed diary sitting in a glass case.

16:00 Lighten the mood with a self-guided tour around the House of Bols (bols.com; admission about £9). Dedicated to the particularly potent Dutch gin from which later versions of the drink evolved, your journey ends with a cocktail mixed in the museum’s Mirror Bar. A great start to the evening ahead. 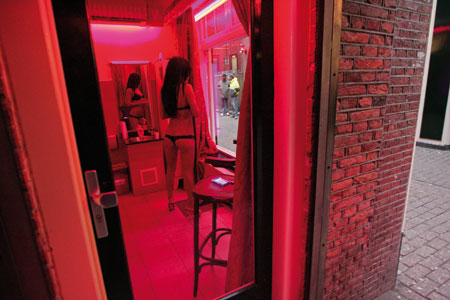 18:00 If you’re hankering after a coffeeshop before the much-dreaded dope card comes into effect (rumour has it you’ll have to be a Dutch resident to access coffeeshops in the near future), one of our all time favourites is Dampkring (29 Handboogstraat; tel. +31 20 6380705).

The interior is a photo opportunity in itself; think of a trippy fantasy-alien forest and you won’t be far off. The smoking menu is one of the city’s best.

20:00 For a meal without pretension, head over to Forno (), where the wine menu is divided into ‘cheap’, ‘decent’ and ‘special’. Filling pizzas and pasta should satiate the most monstrous of munchies.

22:00 It’s time to hit the town proper. Switch between equally rowdy scenes at karaoke-mad Casablanca (24 Zeedijk) and its cabaret neighbour Casablanca Varieté (26 Zeedijk), where you can expect drag queens and magic tricks. A failsafe combo if ever we heard one. 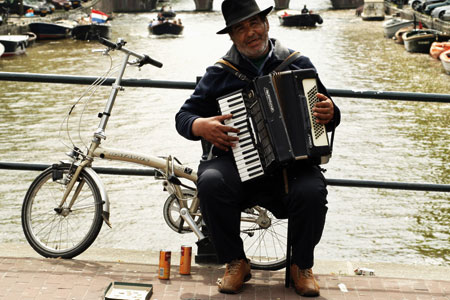 10:00 Renew your energy with the killer English breakfast at The Bulldog Hotel (about £6). With a daily happy hour, a steady supply of Jagerbombs and greasy food, plus one of the Bulldog’s many coffeeshops next door, it’s a quintessential Amsterdam bolthole. Dorm beds from about £14pn.

13:00 Another day, another booze tour. This time, hit up the Heineken Experience (admission about £12) for a bizarre range of interactive beer experiences – including an odd moment in which you find out what it’d be like to get brewed and bottled. 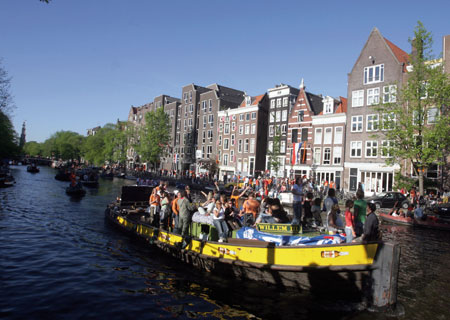 15:30 The park is the perfect place to spend a sunny afternoon. Wandering among the lawns and lakes, it’s impossible not to feel chipper, thanks to the vibe kicked out by guitar-strumming hippies and hipsters, not to mention the ever-present puffs of fragrant smoke.

19:30 Head to the Mellow Yellow (33 Vijzelgracht), one of the Dam’s oldest institutions (it dates back to the Seventies), for toasties on tap.

Stay here if you’re in the mood to relax; to ramp it up, try Little Buddha for theatrical glam.

Ben Fogle takes on a mugger – and wins