World leaders fell over themselves to pay tribute to the Iron Lady, and the list of attendees to her funeral at St Paul’s in London on Wednesday reads like a Who’s Who of the planet’s political landscape over the past 30 years.

Within hours of the news of Thatcher’s death breaking on Monday, #nowthatchersdead was trending on Twitter (leading many to believe Cher the singer had died), macabre celebratory parties were taking place, sparking outrage, and Ding Dong! The Witch Is Dead was hurtling towards number one in the UK charts.

One news reporter described the former Conservative leader as ‘Marmite’ – she was either considered by her critics as the devil incarnate who ruined lives with uncompromising economic reforms, or she was the woman who made Britain ‘Great’ again.

For those alive during Britain’s first woman premier’s 11-year reign, no one sits on the fence. 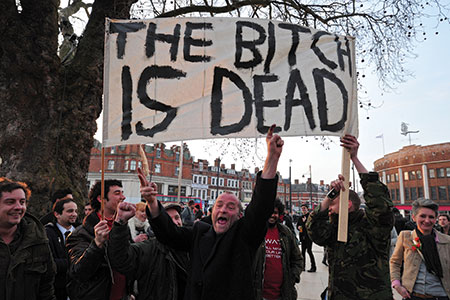 She transformed the economy, sold off council houses to their occupants, marched the country into war against Argentina over the Falklands, and branded Nelson Mandela’s African National Congress (ANC) “a typical terrorist organisation”.

She also deregulated markets, pushed forwards privatisation by selling off public-owned services, neutered the power of trade unions, democratised capitalism and backed the influence of the state.

Thatcher, who was ousted by her own party in 1990, built a “special relationship” with US president Ronald Reagan which helped bring the curtain down on Soviet Communism and the Cold War.

She opposed closer ties with Europe, introduced the Poll Tax and presided over the closing of 150 coal mines.

She also abolished the right of kids to get free milk at school, earning her the slogan, “Thatcher the milk snatcher”.

But while Brits celebrated, got angry at those celebrating, which in turn pissed off the celebrators, here’s how some of the rest of the world marked her passing.

“Her strength of conviction was recognised by her closest supporters and her strongest opponents.”

John Howard, Australia’s last Liberal prime minister who was leader of the opposition when the Iron Lady was in power, called Baroness Thatcher Britain’s most renowned premier since wartime leader Winston Churchill.

He said her greatest legacy was her work with Reagan and the late Pope John Paul II to exert military, political and moral pressure to bring about the end of the Soviet empire.

“In terms of the political framework in which the world lives, it was the biggest single event that I experienced in my lifetime,” he added.

Aaron Wally Peardon told TNT on its Facebook page: “I don’t understand all this hate for MT, she was elected three times, so she must have done something right and most of the people that partied in Brixton were not old enough or even born when she was in power.” 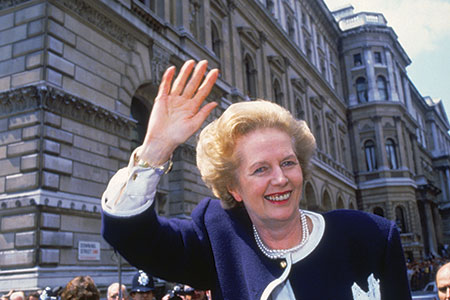 Prime minister John Key said he was an admirer of Thatcher.

“She will be remembered as a very strong and determined leader that faced some real challenges.

She stood up for what she believed in, she was fiercely determined all the way through. I was somewhat in awe of her as a person, who was such a well-recognised and well-known world leader.”

Bryan Gould, who served as a Labour MP in the UK when Thatcher was PM, said the Iron Lady always had a higher reputation overseas than in Britain, where she remained a “divisive figure”.

He added: “I don’t think she spared more than a second or two thinking about New Zealand. She was pretty preoccupied with the relationship with America, and she had big issues with Europe.”

Clint Heine, founder of the Kiwis In London Facebook page, said: “Anybody celebrating the death of her … speaks volumes about what sort of people you are.

“[She was a] role model that broke ground for females in politics in the UK and worldwide, a woman that stood up to bullying unions that were crippling the economy (look it up) and while she polarised opinion, she made the UK a better place to be.” 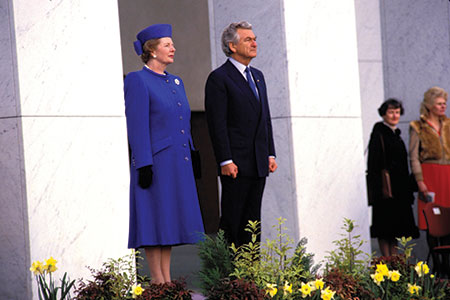 In a statement, Jackson Mthembu, spokesman for the African National Congress, said the party had been on the “receiving end” of Thatcher’s policies in her “refusing to recognise the ANC as the representatives of South Africans” and her “failure to isolate apartheid after it had been described as a crime against humanity”.

He added: “However, we acknowledge she was one of the strong leaders in Britain and Europe to an extent that some of her policies dominate discourse in the public service structures of the world.

“Long after her passing on, her impact will still be felt and her views [will remain] a subject of discussion.”

Pallo Jordan, the ANC’s chief propagandist in exile during the apartheid era, told the Guardian: “I’ve just sent a letter of congratulations.

“I say good riddance. She was a staunch supporter of the apartheid regime. She was part of the right-wing alliance with Ronald Reagan that led to a lot of avoidable deaths.”

The best of the French Alps: We tackle the ski slopes at Espace Killy and Les Trois Vallees