How tough are ya? Hayne’s NFL dream to answer big question

The ‘Hayne Train’ is leaving rugby league, effective immediately, to purse a ‘dream’ to play American Football at the highest level.

Americans know NFL players are tough, skillful and powerful, but are often bewildered by the borderline homicidal guts in the NRL.

The move of Hayne, not a starry-eyed kid but one of the NRL’s finest, will tell us once and for all whether their amazement is deserved. Can an NRL star hack it in the NFL?

Big, strong, fast, skillful and with a step his size has no right to produce, Hayne on paper looks to be a good get for any NFL franchise.

And the fact the 26-year-old joint Dally M-medallist winner made his announcement the day after being named in the Kangaroos squad for the Four Nations shows his desire isn’t half-arsed.

“I’m always telling people to chase their dreams and follow their hearts, if I don’t live by that I’m not being honest with myself,” Hayne said with tears in his eyes after being granted a conditional release from his contract.

“Today I can officially announce that I will be heading to the United States to pursue an opportunity to play American Football.”

It’s not a done deal. He is simply chasing interest from a club, but whatever he makes in the NRL will be dwarfed by a regular NFL contract. 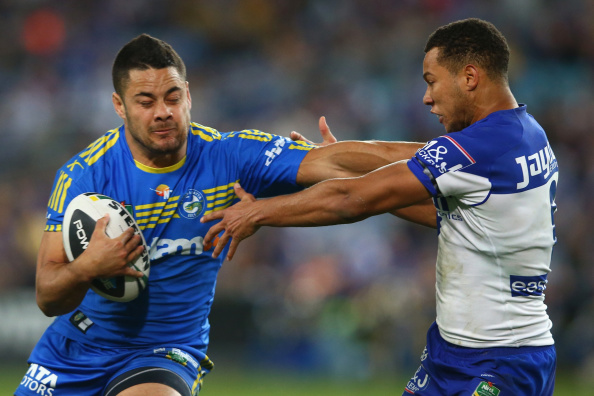 “I will be withdrawing from the Kangaroos Four Nations side immediately, and accepting a conditional release from the Eels to make the move overseas.

“The reason I didn’t make this decision any earlier was because of the part I played in getting (coach) Brad (Arthur) to the club and the way we finished the season. I felt I owed the Club one more year and I gave it everything I could.”

“It’s always been a dream of mine to play in the NFL, and at my age, this is my one and only chance at having a crack at playing there.

“I’m excited about the potential opportunities that lie ahead. I’ve known the deadline has been looming for me to make this call, and I believe the right time is now.”

Hayne’s departure means South Sydney’s Greg Inglis will likely line up at full back for Australia against New Zealand, England and Samoa in the Four Nations starting on October 25. Billy Slater was already out injured.

Star playmaker Johnathan Thurston is also unavailable to Tim Sheens, though he’s still pulled together a side that will be overwhelming favourites.

England will be without Sam Burgess, who is recovering from a broken cheek and eye socket from the NRL grand final but would be been out anyway due to his move to Premiership Rugby club Bath.

New Zealand’s biggest name, Sonny Bill Williams, has also returned to rugby union in a bid to play at the next World Cup with the All Blacks.