Business is booming. It is, with only a hint of hyperbole, America’s fastest growing sport and now it’s got designs on global domination. Women in sport often play second fiddle to the fellas but here we have a football code – seven against seven full-contact American gridiron – breaking pay-per-view records and growing with alarming speed since it arrived just three years ago. The kicker, of course, is that it’s played by models in their underwear.

The Lingerie Football League is the brainchild of Mitch Mortaza, a technology exec who cashed in during the internet boom of the 1990s before dipping his toe into the world of sports marketing. His venture began with a one-off Lingerie Bowl in 2004, its success emboldening him to set up a full-time league with 10 franchises, all with ’sexy’ names like Chicago Bliss and Orlando Fantasy, telecast to 43 countries worldwide.

“It’s been an incredible ride. To start with, people told us that no stadium manager would book our events and we’d never find models willing to put their bodies on the line to play football,” Mortaza admits. “But it’s all happened and then some. It started out almost taboo but has turned mainstream – we’re outpacing WWE and UFC after their first three seasons.

“I thought I would need to have a 10-year plan; I expected to run out of money and have to beg, borrow and steal. But now we’re expanding already. The appetite internationally has been incredible.”

Indeed, Mortaza has brought his roadshow out to Sydney to build anticipation for two All-Star games to be played in Brisbane and Sydney in June. And then, in early 2013, Australia’s own league, with teams to be based in Brisbane, Sydney, Melbourne and Perth will kick off. Impressively, a world series in Brazil is also in the pipeline, with as many as 65,000 expected to show up.

Mortaza seems like he’s on to a winner but there’s still plenty of skepticism – after all, it’s hot girls running around in their pants, not real sport. Right?

“These girls are serious athletes – 98 per cent competed at college level,” Mortaza insists. “Does it objectify women? Most people who ask that haven’t seen a game. When you see how seriously they take the game – of course we use sex appeal to sell the product and get attention, but unless we were a real sport that demanded real athleticism, it wouldn’t grow.”

Chloe Butler hails from far north Queensland, where she grew up playing rugby, and later represented Australia in track and field. Now, though, she runs around for the Los Angeles Temptation, the three-time reigning champions, where she plays as an inside and outside receiver and won all-star selection in her second year.

“Marketing is a huge part of all sport,” the 24-year-old says, batting away the reservations about the seriousness of a sport where competitors are in their underwear. “Look at someone like David Beckham. He’s made a few bucks by taking his shirt off. I was a runner and a gymnast and this isn’t that different. I’m an athlete and my body is my asset.” 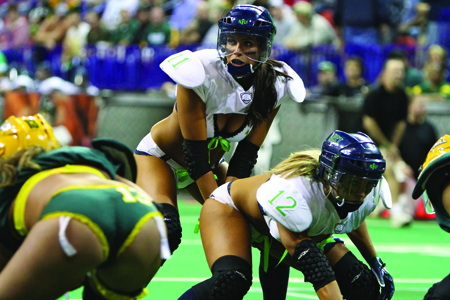 A brief glimpse of Butler’s highlights reel confirms that she, like all her teammates and opponents, is eye-wateringly fit. The girls might be wearing lycra but there are no high heels or bling; the promotion might leave sceptics shaking their heads, but the athleticism of the ladies involved is hard to question.

“It’s for real – we’re tough girls,” Butler says. “Sometimes girls show up to try out and just want to do the glamorous side of it but they last about five minutes and we have a giggle at them.

“Yes, I’ve had a wardrobe malfunction – I lost my pants after a touchdown. But once you’re in the zone, you forget about it. It’s intense – we’ve had girls with fractured ribs and smashed noses, we get girls with concussions.”

Lingerie Football has attracted predictable criticism for its supposed devaluing of mainstream women’s sport by peddling the implicit assumption that crowds will only tune into women’s sport if the competitors are sexy. In Lingerie Football, so the critics say, the sex appeal isn’t just the cherry on top – there’s no sundae without it. But Adrian Purnell, another former track and field star, now a linebacker for the Tampa Breeze, is forthright when it comes to her footballing bona fides and her lack of concern about the attire.

“Maybe people come for the uniforms but they come back for the product,” she says. “We’re all comfortable in our skin and it keeps the crowds around. I’ve been a cheerleader since I was seven years old and had my stomach showing so it doesn’t bother me at all.”

Even the dressing rooms, brimming with 20-something women in their smalls, are, according to Purnell, proper football inner sanctums, admittedly without the jockstraps and flicking towels.

“Every dressing room is different – some are pretty controlled while others have music blasting and it’s like a party. I like to turn up my music real loud and just get angry,” Purnell says. “But there are no pillowfights if that’s what you’re asking and we don’t have sleepovers.” 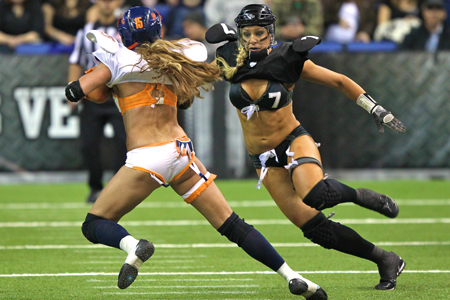 Australian crowds may not be immediately convinced but, either way, they’re going to get plenty more opportunities to change their minds and embrace Lingerie Football.

The local league, considering its rare distinction of having a TV deal locked in before any of the teams have been minted, is bound to make a high-visibility splash and Mortaza is confident of finding enough players with the right blend of telegenic athleticism to fill the new franchises.

“We’re using the same formula in Australia as what worked in the US,” he says. “There are a ton of women with that athletics background but who have maybe hit that ceiling in terms of the notoriety they can achieve.”

That American football is tactically complex and mostly unfamiliar to Australian women is, according to Mortaza, no obstacle. They will learn on the job.

“It’s part of the reason we’re confident it will work – the vast majority of the ladies never touched a football but as along as you have that intensity and athletic, we’ll teach you the game. Within 10 years, we expect this will be a major product that sits alongside the football codes.”

The more Mortaza talks about it, and the more the glamorous players insist that running around in their underwear is no big deal, the more it seems like Lingerie Football is one of the safest bets around. After all, months before the first Australian bra strap has been twanged, Lingerie Football sounds more bankable than the A-League and no more contrived than T20 cricket.

Essential events in London this week