The crab claws are piled up neatly, severed with almost surgical precision by the otter which had caught it. Balanced on top is the shell, picked clean of even the last shred of meat, with a single toothmark to show where the animal had efficiently stripped off ?the sections it didn’t want.

Unluckily for me, the disembowelled crab and a bright green hillock where the otter would mark its territory every day, are the only signs I spot of the furry family, presumably tucked safely away in one of their five holts ?or dens along the ?Hinnisdal river.

But with ex-Marine Mitchell Partridge as my guide on a wild walk across the Isle of Skye, almost every stone tells a story as he points out signs, tracks and clues left by the island’s wildlife, from fox prints and an abandoned heron nest to a hovering peregrine falcon, whirling high above us. 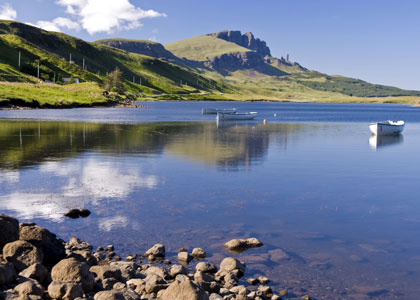 Skye’s also home to red deer, while golden eagles with their impressive 6ft wingspan make their home in one of the protected areas of evergreen forest.

As I’m being buffeted by 40 knot winds, we catch sight of their white-tailed cousin, a sea eagle, utterly unconcerned by the gusts as it hovers lazily above our heads, eyeing us up before deciding we’re not lunch and soaring gracefully off ?as if a small gale is hardly worth noticing.

Even if you don’t spot anything more exotic than a flock of curious sheep, it’s impossible not to be mesmerised by Skye’s scenery. Forced into its current shape by an ancient supervolcano eruption, basalt rocks still litter the shoreline, waterfalls ripple along the hills, and the springy heather underfoot stretches out to the mountains, black and red against the ?sky, some still topped with snow.

Silvery blue lochs shimmer among ?the slopes while smaller ‘lochens’ dot the ?top of hills, home to wily and wary trout which have bred there in isolation for centuries. And along the coast, seals and dolphins chase the shoals of mackerel as they move gradually into the warming ?sea waters.

With my eyes open – thanks to Mitchell’s expertise – I also discover the remains ?of hillside stone foundations for corralling cattle, some dating back to Mesolithic times, as well as the island’s black houses.

Their thick walls of stone, peat and moss protected the family and animals squeezed into one or two rooms, as the smoke from the fire blackened the interiors before slowly escaping through the thatch.

But after exploring the ruins of one on the seashore, it’s time to follow in the otter’s claw-prints and stop for a snack – not, thankfully, some of the UK’s 650 types of edible seaweed scattered nearby but some ultra-fresh seafood.

Scooping whelks from the rockpools, ?I borrow Mitchell’s knife to lever a few determined limpets from their rocks and gently simmer them over his camp stove. Then armed with just a safety pin to winkle into shells, we tuck into our foraged feast in the sun. Wherever the otters ?are, they’ve certainly got the right idea. 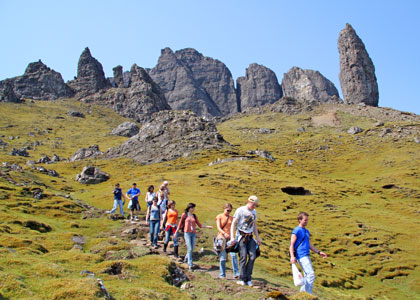 Places to eat, drink and sleep in the Isle of Skye

Places to sleep: Hotels in the Isle of Skye

Stay in luxury at Kinloch Lodge, with its Michelin-starred restaurant, stunning setting and aristocratic pedigree (kinloch-lodge.co.uk). Rooms cost from £160pp, including dinner and breakfast.

Enjoy views of the sea and mountains, plus log fires for cold nights at the Skye Picture House (skyepicturehouse.com) Rooms cost £30-37pp.

For boutique beds on a working croft, head to five-star B&B The Spoons (thespoonsonskye.com), just outside Skye’s main town Portree. Rooms cost from £130 per night.

Places to eat: restaurants in the Isle of Skye

Named one of Scotland’s ?top restaurants, 3 Chimneys (threechimneys.co.uk) has views ?to Loch Dunvegan, in the island’s ?north-west corner. Dinner costs ?about £60 for three courses.

For the freshest seafood, Creeler’s (skye-seafood-restaurant.co.uk) catches some dishes within sight of ?your table. Main courses range from traditional French to Cajun and ?cost £12-18.

Feed all your senses at The Red Roof Cafe Gallery (redroofskye.co.uk) with local, organic and Fairtrade food in ?the cafe as you enjoy the artwork in ?the gallery.

Places to drink: Bars in the Isle of Skye

Eilean Iarmain (eilean-iarmain.co.uk) has its own little whisky company, the only one still with a headquarters in ?the Scottish Hebrides.

‘Whisky embassy’ The Stein Inn (steininn.co.uk) has more than 125 single malts to choose from. Work through more than 200 malts as well ?as real ales at the lively Seumas Bar ?at Sligachan Hotel (sligachan.co.uk/seumas-bar.php)

Swimming with a gentle giant in Cornwall!