Living on the land in Mount Mulligan

It has the drama of a ballet and the rush of a V8 Supercar hooning down the straight, and when the players come crashing down to the earth there’s only thick, choking dust in the air. After knocking the rouge, one-ton bull on to its back with a quad bike, the stockman leaps into the air and, with lightning-fast reflexes, wraps a leather belt around its hind legs. Never has something so difficult looked so easy.

“The most dangerous time is the few seconds between it hitting the ground and you tying up its legs,” he says, when I walk my horse over. “The thing’s got razor-sharp horns and he’s going to do everything he can to stick them in you. We had this rodeo clown come mustering us a while ago – he once got his arm caught up with a horn. You should’ve seen the scar. Opened him up like a carrot.”

Later that night, I recline in front of a campfire like a dirt-covered Buddha nursing what may be the worst case of saddle-soreness since the early 1800s. It’s the last night of a four-day mustering trip at Mount Mulligan Station – a working cattle farm two-and-a-half hour’s drive southwest of Cairns in the Atherton Tablelands of Cape York – and I’m thanking God it’s nearly over. And although I only had a taste of the punishment endured by travellers who come here for weeks or months, I rest easy knowing I’ve seen, smelt and breathed Australia’s premier cowboy country.

The drive to Mount Mulligan is an experience in itself. After leaving Cairns, the road winds its way up the thick rainforest canopy of the Malbon Thomspon mountain range before spilling onto a vast volcanic plain. I drive under wide-open skies along valleys carpeted in mango orchards and sugar cane plantations, past the towns of Mareeba and Dimbulah along the Bourke development road. Mount Mulligan Station’s boundary begins not far from here, but it’s another 50km down a dusty dirt road to the stationhouse.

Seconds after hitting the dirt, I see a flock of ten or so wedgetail eagles picking bits off a fresh bit of roadkill – probably a kangaroo or wallaby. With wingspans more than two metres wide, they are impressive – one of the largest birds of prey on earth. I snap a couple of pics and coast on through.

Half an hour later I see it for the first time: mighty Mount Mulligan like a gaint spaceship, bathed in the soft afternoon light. Three times as long as Uluru, this big red rock has an unmistakable, magnetic pulse that draws people to it. I can’t look away. Why would I want to?

Vincent Wayson, a traditional landowner I meet, seems to know why. “There’s a bad spirit in the mountain. Very bad one indeed,” he says. When I asked for elaboration, he mumbles something and walks off.

As I get closer to the stationhouse, I notice hundreds of man-made rock piles – evidence of the greed, prosperity and poverty that took hold of this desolate place after James Venture Mulligan discovered gold here in 1875. By 1880, more than 10,000 English, Irish and Chinese miners were digging for gold here in caveman-type conditions, taking picks and shovels to the hard, rocky soil. Prospectors who found gold had their pick of any of Mount Mulligan township’s 22 hotels and the trappings that came along with it: booze, women and the best food. Those who didn’t find gold starved.

When the surface gold ran out in the early 20th century, coalmining took over and a railway was built to freight the stuff out. But disaster struck in 1921 – its second year of operation – when an underground explosion killed 75 people – every man in town. And though the mine reopened after an inquest, Mount Mulligan became a ghost town, with only 50-odd people living in the area in the closing stages of last century. And so things remained until 2008, when pastoralist Gordon Pringle saw the 400-metre-high sandstone rock at the heart of this land and decided to buy close to a million acres of it.

“Everyone in Australia says their backyard is the best place in the world,” he says, staring at the big rock. “But in my case, it’s true.” 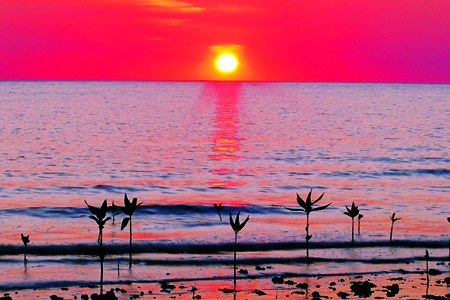 Gold in them thar’ hills

The campsite and stationhouse are set on the banks of the Hodgkinson River. The amenities are basic but the views of the gently flowing river surrounded by elephant grass and the big red rock in the background are out of this world.

The station is run by Rory O’Toole, a crusty old Irishman with a chunky gold nugget hanging from a chain around his neck. Rory sailed to Melbourne in 1971 then went ‘swagging’ up the coast, avoiding Sydney, until he reached Cape York. Happenstance introduced him to a crew of old-timer gold-diggers who were still prospecting the old way, much the same way it’d been done back in the 1800s.

“They taught me how to read the country,” Rory says. “Gold is found along old river beds, under tea trees and in spots that flood during the wet season, when the gold is pushed to the surface. The changing colour of the soil can also mean there’s gold.

“I then combined the old – what they taught me – with the new – a $6,000 metal detector – and got pretty good at sniffing it out. The bush is my bank. When I need money, I go walkabout until I find some.”

Later that day, Rory and I go out on a 4WD to strike it rich. After picking a spot that runs parallel to an abandoned mine, we take turns on the metal detector, walking at a snail’s pace up and down the parched red earth under the searing sun. I’m bored out of my mind after 10 minutes and laugh out loud when Rory tells me he sometimes goes six months without finding any gold.

“Going for a walk in the bush is nice enough,” he says when we return to the station empty-handed. “The gold is just a bonus.”

Dinner is cooked but not served by Rory’s wife, Desyln – you help yourself here and wash your own plates. There are Fred Flintstone-size beef steaks butchered fresh at the station, damper with butter, roast veggies – potato, pumpkin, onion – and cauliflower grautin. As we tuck in, Desyln tells me that on the night she met her husband of more than 30 years, he was dead drunk. And when he made a pass at her, she floored him. The punch sent Rory tumbling to the ground but left him determined – it seemed to win the heart of the pretty bar-room brawler.

“We were destined to meet,” Rory says, holding her hand in his.

“Believe only half of what you see,” Desyln smiles back, “and nothing you hear.” 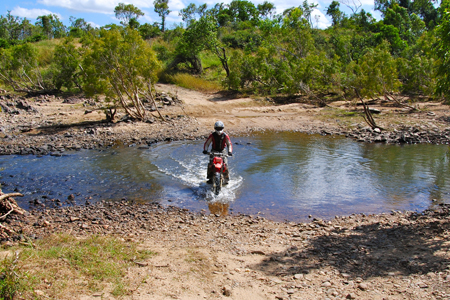 The next day, I head out early in the morning on quad bikes with Liam – Desyln’s ninth child – to feed and ready the stock horses for the next day’s mustering. I don’t mind riding quads but I’d rather be on a dirt bike. When I booked the trip, I was told there were dirt bikes here and I can’t help but feel a little short-changed. Yet all is forgiven when we pull into the stables and I see a beaten-up Honda 230 CRF.

“She’s had a few knocks over the years,” Liam says, preparing high-energy oats for the horses. “But I think she works. Want to give her a go?”

Liam and I spend the day burning down long, dusty straights, through single tracks that maze through the bush and across shallow river crossings. The property goes on and on and is home to all kinds of wildlife. We see a pack of wild brumbies charging through the trees, kangaroos and buffalo. There are no crocs this far from the sea but plenty of snakes, scorpions and spiders and other creepy crawlies you don’t want in your tent.

We stop for a swim at a swollen weir, where Liam pulls out a couple of hand reels from his backpack. He cuts up some steak leftover from last night’s dinner and we cast our lines into the water. I’m surprised to learn my guide is just 20 years old; his bush skills and emotional intelligence suggest he’s older. But what stands out even more is how damn happy he is – one of those rare people who seem totally satisfied with their life, home and the rarest of all, their line of work.

“The cowboy thing pulls chicks,” Liam says, putting things into perspective. “I tried the hippy thing but it didn’t work. Women love cowboys. But it isn’t conducive to holding down a relationship when you’re off in the bush.”

Liam barks on about what it’ll be like tomorrow on the muster – riding a stockhorse at full gallop, leaping over gullies and chasing a bull on a quad bike.

“It’s real cattle droving – not acting,” he continues, stopping only long enough to pull in a small bream. “It’s not like in the city when everything goes to plan.”

I rub my hands in anticipation. I haven’t ridden a horse in years, but don’t imagine I’ll be too saddle-sore. I mean, how hard can it be?