Chances are if your new living companion has knotted, shoulder length hair, wears outrageously baggy, dun coloured clothing and says ‘dude,’ a lot then they’re a hippie and won’t ever be on time with the rent.

I cannot claim to be the world’s greatest roommate. I’ve been known to occasionally eat the last Tim Tam, forgot to take out the bins and even start a small fire or two by accident.

Living with housemates is an experience and some are more pleasurable than others. But before you pack your bags though, read on…

Consider this step one. The sooner, the better. To help avoid reaching the stage where you want to, well, kill your roommate, make sure there are ground rules in place from the offset.

If you are moving into a house share, ask what the rules are and if there’s something you think is missing, suggest it. If you are moving in with friends, before you even sign anything, have a chat about what you expect from your arrangement.

For example; if your ad on Gumtree unearths a heavily bearded, 33-year-old applicant with open sores on his forearms and a bad case of British dentistry you should make it clear to ‘Spider’ that methamphetamine isn’t to be smoked inside – as gently as possible, of course.

Anyone who has lived in Redfern will tell you that no amount of vanilla incense or open windows can totally mask the smell of particularly heinous narcotics in a bedroom, in much the same way that once a rug has been vomited on, it’s never quite the same.

Sounds simple enough, but it can make a world of difference. Talking at the beginning will likely mean there won’t be attempted stabbings at the end. 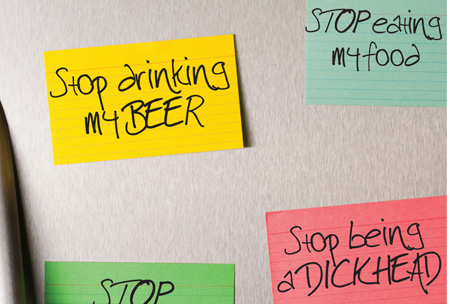 So, you’ve sat down and had a good old chinwag with your new live-in best friend/s, drawn up a lovely list of agreements on (what you thought) was a marker board of truth with the indelible ink of trust and within a week everything has gone to shit? Not to worry, it’s just time to go to phase two of our roommate survival plan.

Generally in a group of people there is one person who is more organised and better at dealing with conflict than the others. This person can, officially or unofficially, become the household ‘manager’. If you accept the manager mantle you’re going to need to try and take control of the situation.

But, be wary, because roommates – like all of history’s other peons, dish pigs, helots and serfs – don’t always take kindly to being ruled. If you don’t play your cards right you might come home from a long day’s work to find your housemate/s have risen up against your tyrannical rule and barricaded themselves in the living room with your double mattress.

If this happens, best not go into your room because someone will invariably have taken a dump on the carpet or cut the heads off all of your childhood toys and nailed them to the walls.

To avoid this Spartacus uprising scenario, be fair and even handed in your management. Split all your chores evenly. 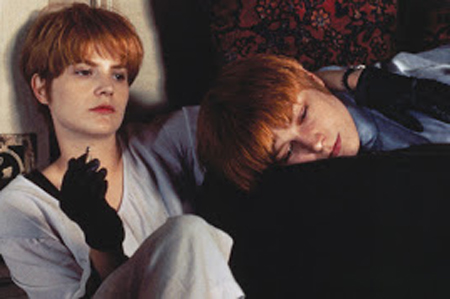 Alright. Steps one and two haven’t really worked. Don’t panic though, just think a minute! People will tell you that waiting for something to go away isn’t the right approach to take, and, in most situations I’d agree with them.

But we’re not talking about termites or a solid case of pubic lice here. They are people, just like you. Chances are that things have been a bit weird because you’re all just learning to live together and, like a new pair of shoes, it might pinch a bit at first.

Your Utopia lies in ruins. The fridge smells like a public bathroom, your bathroom smells like a rubbish tip and your rubbish tip is now the corridor. Roaches stalk the shadows and the only thing louder than your sobs in the night is Pablo, the Guatemalan bartender’s 3am trance sessions.

The time for diplomacy has passed, conflict may well be the only way forward. That being said, ranting and raving mindlessly isn’t your best option here. Instead of getting personal with Pablo and his awful taste in music you’d be better appealing to his humanity.

Explain that you keep different hours and while you understand that he wants to relax after a long night shift, you need to get up at 7am to work and you need  sleep. If that fails you could always blow the fuse to his room. 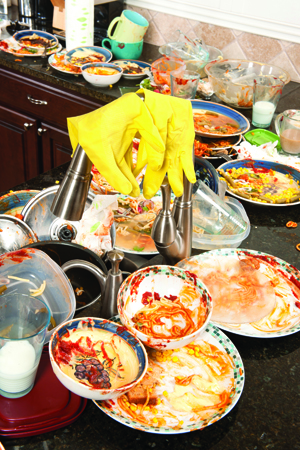 Some things just weren’t meant to be. C’est la vie as we French speakers say. Now the most important thing is getting rid of the problem roommate as quickly as possible. Because, after all, your stuff is already here and it’ll be a massive pain in the arse getting it all out.

If there are more than one of you, get the others onto your side and orchestrate a scorched earth policy. Bullying at school or in the workplace is looked down upon (and rightly so) but in the case of an errant, untidy, rent-dodging roomie it’s warranted.

If it’s just you and another person, slip your super $20 and get them to surreptitiously change the locks while they are out. After that, burn their clothes for warmth until they agree to pay their share of the gas bill. Bastards!

Cost of living in Canada