New York stand-up Lewis Schaffer has been playing his Free Until Famous show in London for ages – it is the town’s longest running solo comedy show.

But the ‘until’ part of this has now come true, and the erstwhile humourist has, as he puts it, his first ‘paid shows’ coming up, the aforementioned Yankee’s guide to Blighty (which he freely admits includes Scotland and Wales, and often Ireland as well).

He’ll be teaching the Brits, and other expats, about Britishness, with his trademark US-led rhetoric.

The 17th annual Human Rights Watch Film Festival shines a light, through both documentary and features, on key issues and struggles around the world.

Important films to look out for include Congo-set War Witch and The Gatekeepers, a doco about Israel’s secret intelligence service’s decades-long counter-terrorism activities.

It’s been two years already and this new photographic exhibition, The Great East Japan Earthquake, looks back on that fateful day on which the earth reminded us how powerful it can be.

Looking at the event, aftermath and the recuperation, it’s been shown already in Seoul, Jakarta and Bangkok in 2012, and now hits London.

Maori music and dance is the focus of this day as part of the Guildford International Music Festival.

This will be a day of events and performances at Clandon Park’s Hinemihi, the only historic Maori meeting house (whare nui) in the UK and one of only a handful outside of NZ. 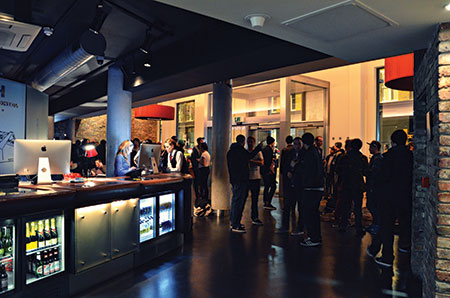 The Hoxton Hotel hosts its very first market pop-up, but rather than shabby stalls on some windy street, the hotel’s two meeting rooms become the home of all manner of outlets and attractions.

There will be a denim room from Mint Voyage, a pop-up bar courtesy of The Hox Grill, sexy undies from Sam at Bunnies Forever, as well as loads of DJs and tunes to get you groovin’ while you peruse.

Learn to love like an Italian with this seduction class thrown by the folks behind the Italian apperitivo (which arrives over here this week).

It will teach you how to score for sure, but it’s not like you need any pointers anyway, right?

Professional picker-upper Johnny Cassell will be on hand to dispense some tips, just in case.

This sheep supper club at the Jugged Hare in Barbican takes one of the cutest of all of our four-legged farmyard friends and puts it to good use on the table.

It will look at the sheep in all its stages, from lamb to hogget to mutton and ewe cheese, even, showing there’s no better animal to take pride of place on your plate.

Close encounters: We go UFO spotting in the Northern Territory