In London you’re never more than a foot away from a location that’s been used in a film or on an album cover. Hang on, maybe that was a rat. Either way, unleash your inner ligger and get some Facebook shots at these iconic spots.

Animals was Pink Floyd’s tenth album and is a cutting condemnation
of Britain in the late ‘70s. The album cover, designed by bassist and
writer Robert Waters, is of the Battersea Power Station and the pig
flying over it represents those at the top of the capitalist system.

The
pig-shaped balloon was floated above the power station but
unfortunately drifted off and landed in a farmer’s field in Kent,
reportedly scaring his cows. In the end, the pig was superimposed on
a picture taken earlier.

Battersea Power Station now sits empty but is a listed building whose Art Deco façade makes it iconic in its own right.

The majority of the film was shot in London, but most recognisable is the street end where Eddie and Dog live and the gang hang out.

In reality, this corner of Park Street is opposite Borough Market – an upmarket gastro food fair and not somewhere you’re likely to get caught in the middle of a weed heist. It’s on from Thursday to Saturday and is a good place for a drink with atmosphere.

Ultra violent and controversial, A Clockwork Orange caused such outcry for its casual brutality and rape scenes that director Stanley Kubrick chose to ban the film himself.

The plot centres around glittery but psychopathic Alex and his delinquent gang, the ‘Droogs’. Alex lives in a bleak block of flats with his equally malfunctioning parents. Depressingly, these flats really exist and are the Tavy Bridge Centre on London’s sprawling Thamesmead South estate.

The scene in which Alex pushes his mates into the water then slices one of their outstretched hands with his knife is filmed on Thamesmead South’s Binsey Walk.

Not recommended for a day out unless you’re a massive film buff or intrigued by British architecture at its most grim.

Whatever your opinion of the mouthy Gallagher brothers, Oasis were an unavoidable soundtrack to the ‘90s. Their second album, What’s The Story Morning Glory, sold 15 million copies and propelled the boys to Britpop stardom.

The album cover was shot on Soho’s Berwick Street, which was a haven for independent record shops. The two guys in the shot are London DJ Sean Rowley and album producer Owen Morris.

Sadly, most of the music shops have bitten the dust but Berwick Street is still a colourful thoroughfare and you’ll find pubs, cafés, clothes shops and the odd sex show. Plus, there’s a market six days a week. 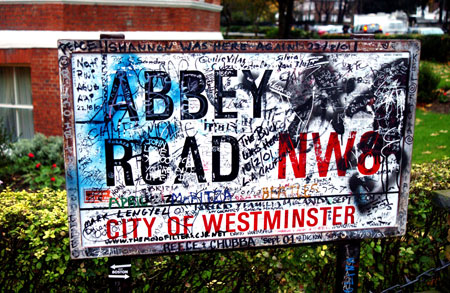 Predictable, but we couldn’t miss it out. In 1969, The Beatles immortalised the zebra crossing outside Abbey Road Studios for their eleventh album and the cover art spawned three decades of tourist poses and a tongue-in-cheek, sock-on-penis tribute from the Red Hot Chili Peppers.

Abbey Road’s street sign has now been moved out of reach of souvenir hunters and the council paints over Beatles-fan graffiti several times a year. Abbey Road Studios has installed a webcam on the crossing and pretty much any time you look, someone is stopping traffic trying to get a replica shot.

Visit, but don’t get run over.

Batman dosses down in a Gotham City mansion called Wayne Manor which gives him access to the underground Batcave. Tim Burton’s classic, starring Michael Keaton, used Knebworth House as the exterior of Batman’s pad. The gothic mansion is, in fact, 45 km north of London, in Hertfordshire.

Knebworth House is cult in its own right, first as the home of Victorian novelist Edward Bulwer Lytton – author of the words “The pen is mightier than the sword” – and secondly as a legendary rock concert venue. Pink Floyd and Led Zeppelin played here in their time and now Sonisphere Festival happens annually in the mansion’s grounds.