Falling drunk out of a club, screaming abuse or slobbering over a stranger: this is how we like to see our celebs and on hand to feed our desire for juicy pictures is an ever-growing network of paparazzi, Frankie Mullin writes.

“People are on the outside looking in to the world of celebrities,” says Trevor Adams from London’s Matrix Picture Agency. “Celebrities’ lives look so much more interesting and glamorous than our own. But the public doesn’t just want to see the good bits.”

However, whether or not the celebs like to admit it, their relationship with the paps is a symbiotic one: it really is no coincidence the paparazzi is there every time Jordan and her ilk pop to the shops.

“The fastest growing way of finding out where celebrities will be is by getting a phone call from their agent,” says WENN paparazzi manager David Sims.

“And lots of celebrities tweet their plans, knowing full well that paps, as well as fans, will read it.”

Adams agrees: “Up-and-coming celebs like reality stars will do anything to get their picture taken.

“And massive mega-stars like Jack Nicholson are fantastic too.”

Other stars, though, are harder to capture. In London, News Of The World phone hacking victim Sienna Miller no longer needs to court publicity on the street. Likewise Cheryl Cole.

“It’s the ones who’ve made it big but have forgotten how they got there who see photographers as the enemy,” Adams says.

He knows first hand. A few years back, a more naive Adams left the engine of his car running after leaping out to photograph Robbie Williams, only to have the singer snatch his keys from the ignition and throw them into a drain. Soho was brought to a standstill for several hours

And there’s no still love lost today: in February, Kate Moss’s fiancé Jamie Hince got into a scuffle with a pap outside Soho’s The Box and days later Michael Douglas rushed a snapper, labelling him “an asshole” after Catherine Zeta-Jones was allegedly punched in a paparazzi scrum outside their London hotel.

Annoying though paps may sometimes be to those they pursue, pockets of the  industry do have self-imposed codes of practice. “Several celebrities have lost babies recently and our agency photographers would never look for that person immediately after,” says Sims.

And Adams scorns a digital era which has created a breed of under-skilled, ruthless and money-hungry snappers. “The problem is, there are too many pretenders now who aren’t photographers, they’re just people with cameras,” he says.

Ultimately, which pictures make it to print will be the decision of newspaper and magazine editors. So, if the shit hits the fan and a photographer’s there, don’t expect them not to click that shutter.

“Lots of people said the photos of Diana and Dodi’s death shouldn’t have been taken,” says Adams.

“But as a photographer you have to take a picture as the situation presents itself. We’re just here to record things.” 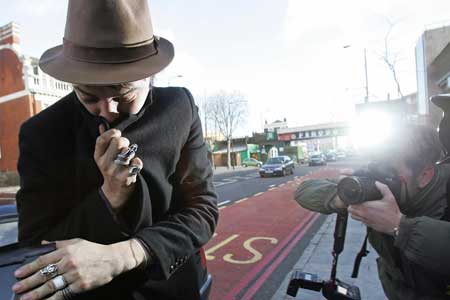 Spot a celeb yourself

Here’s where to look:

✹ Bond Street: The best designer shops are here so you could see absolutely anyone. Victoria and David Beckham shopped here before they moved to LA.

✹ Primrose Hill: Not quite the celeb epicentre it used to be, but you’ve still got a shot of rubbing shoulders with Daisy Lowe, Agyness Deyn and Pixie Geldof.

✹ The Ivy: If you don’t mind forking out, you’re almost guaranteed to see stars here. Tom Cruise digs it.