The magician wants to know why I’m recording the interview on my iPhone and not a dictaphone like everyone else he has met today. I guess I’m new-school, I laugh and shuffle nervously in my seat. In his charming Irish accent he says, “you’re one of those Gen Y types, like Jason Dorsey”.

Sorry, who? “He’s a motivational speaker and a friend of mine. Most people don’t know this but I give motivational talks as well,” the magician reveals.

You see, Keith Barry isn’t your regular magician. He’s interested in people, the brain, body language. He is able to read and understand the subtleties of human behaviour.

Irish-born Barry has been performing magic for as long as he can remember. He had a residency in Las Vegas, where he was awarded Best Magician in Vegas in 2009. He can do tricks with cards, he can light your wallet on fire, he can even catch a bullet in his teeth. But what he is really interested in is tapping deep into your mind.

“People ask me all the time, where do you learn your tricks? But they’re not tricks. I have learnt a certain craft by teaching myself about the brain. I study science magazines, like New Scientist. I read about the power of the mind.”

Barry may have these magazines lying around his Sydney harbour hotel for research, but he’s also going to use them to hack into my brain. Flicking through the magazine, Barry has me to tell him when to stop. Then he rips out the page.

“Make sure that you’re happy there’s a couple of hundred words on both sides. Yeah? I’m going to close my eyes from now on.”

He asks me to rip the page in half, again and again, until I am left with a piece about the size of my hand. Then I’m instructed to choose a word from the page. I go with ‘newspaper’. It’s about as random as you can get. But we’ll come back to this.

It’s easy to be taken by Barry. At 35-years-old, he has youthful good looks, he looks you in the eye when he speaks and he listens intently. But then, listening and paying attention is all part of his brain hacking act.

Still, it’s not hard to work out how he got his own Discovery Channel show, Deception with Keith Barry. He’s also a YouTube sensation, having performed tricks on the likes of Lindsay Lohan, the Pussycat Dolls and Charlize Theron. He performs a seriously hilarious, and mind-boggling, trick on Samuel L Jackson which involves a spiky nail, a blindfold and a paper cup. Jackson appears scared shitless as a blindfolded Barry hovers his hand above the nail.

So what’s his favourite trick? 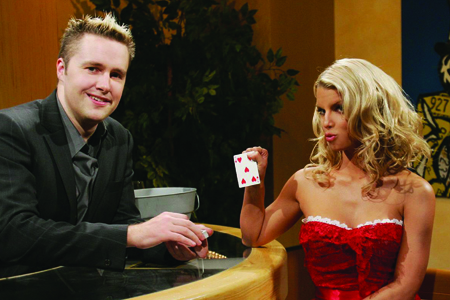 “I really enjoyed the stunt I did with Nicole Scherzinger,” he says.  “I took her out in my car and drove her around the hills in Hollywood while I was blindfolded.  Her reaction was brilliant – she screamed the whole way through.”

It’s Barry’s first time in Australia and he’s on a whirlwind press tour, including a spot on a breakfast TV programme. He performed the spike trick on the show’s host Kochie, whose hand shook like a leaf. Barry silenced the man who, in his entire career, has never been lost for words, if that’s not magic, what is?

When Barry returns in August it will be a first for Australian audiences. “I am really excited to bring my live show down here because I think the Australians and the Irish have a similar sense of humour. Well at least I hope they do. Do they? Because that is the show I am bringing down here: me planting thoughts in people’s heads, extracting thoughts, hacking into their minds. I hope I understand Aussie brains.

“The show is designed to make people laugh first. And then when they’re crying with laughter, they will be fooled badly as well,” he explains. “It’s kind of a comedy show mixed with magic, mentalism, brain hacking and mind reading.”

Barry began studying magic at the age of 14 when he purchased a book entitled Magic for the Complete Klutz. But it wasn’t until university when he picked up his girlfriend’s psychology books that he realised he could put the two together and create, what they’re now calling brain hacking.

“From then I just studied as much as I could on psychology, human behavior systems, pattern recognition, literally anything to do with the brain. Since I was 18, so half my life. When you mix all those different elements you can really try and figure out what people are thinking,” he says.

“But it doesn’t always work. Sometimes you get stuff wrong. When I first started off I would be getting stuff wrong all the time. But over time, you get better at it.”

And has he ever used it to his advantage? I, for one, would be using it to get out of speeding tickets. 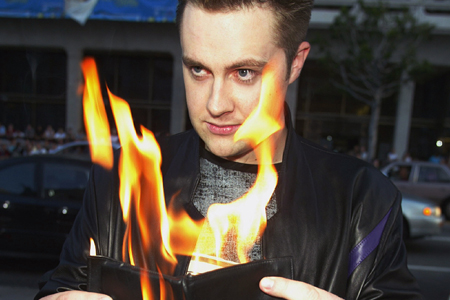 “Oh yeah, stuff like that but I like to use it more in high-end stores. Like, if my wife is buying a dress or something. Every girl likes to get a good deal. But what I do is, I go into the corner of the room and hypnotise the sales assistant and make her give me the dress for $10 when it’s worth $500. And yes, this has really happened,” he smiles.

“You have to be able to spot the right person. So it will only happen, maybe once a year. I might see hundreds of sales assistants, but I know it’s not going to work so I don’t even try. You gotta spot the right person and then bang – you can knock them under,” he explains.

And how does he spot a soft target?

“I can spot an easy person to crack, and it’s the opposite of what people think. The more intelligent the person, the easier it is for them to go into deep hypnosis and deep trance. Because they listen more intently. They listen to instruction. Stupid people cant follow direction. I don’t want to sound mean but it’s true,” he says.

“People think you have to be stupid to be hypnotised but it’s the other way around. Brains are like safes, some are easy to crack into and some are difficult to crack into,” he says rather ambiguously.

Barry asks me to say the word I chose earlier in my head. Not out loud. After getting me to repeat the alphabet and visualise the object (he has figured out that it’s a tangible item) he writes something down. Staring at me so intently it makes me blush, he asks me if the word is ‘magazine’.

I sigh, feeling awkward and somewhat responsible for the failed attempt. I wonder if my safe was too hard to crack into, thus making me stupid.

I tell him the word I chose was ‘newspaper’. Sorry Keith, it’s Friday, my brain is really scattered.

“Oh, not magazine? Fuck. So close,” he shakes his head.

Then he shows me the piece of paper. It says: newspaper.

Missing US tourist found safe and well at NZ backpackers

Theatre: All My Sons