Before I can answer, he continues: “This is the exact opposite of riding a horse. Pull on that line and we will soon be watching you fly away.” So it’s with those anxiety-inducing instructions I’m introduced to kitesurfing.

The sport is a relatively new one, a complicated combo of wakeboarding, windsurfing and gymnastics. In 1998 it went mainstream.

Coincidentally, that was the same year that El Gouna, the Egyptian kitesurfing hot spot where I’m taking my lessons, started its transformation from empty desert to developed tourist town.

Arriving at the Red Sea resort had been a bit of a mission (a 40-hour delay thanks to airline strikes meant I’d spent the previous night camped out in Heathrow airport), so I have never been so pleased to see a tour driver as I am to see Samy. The Cairo-born Egyptian has an infectious smile and welcomes me to Hurghada airport in the hot September sun.

I greet him with salaam alaikum (hello) and he gives me a few enthusiastic high-fives, teaches me some new words and turns up his stereo. 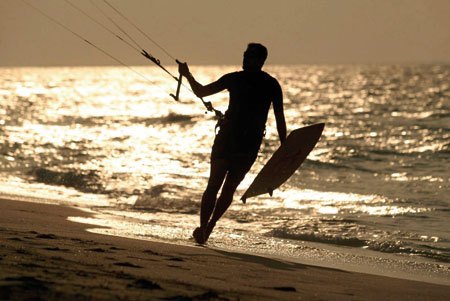 Soon everyone in my tour group’s minibus is clapping along to Middle Eastern pop sensation Amr Diab’s Habibi Ya Nour El Ain, hurtling along the desert highway towards El Gouna.

Refreshed the next morning, we head to RedSeaZone, one of three kitesurfing schools on the outskirts of El Gouna, on the funkily named Mangroovy Beach.

Its L-shaped wooden beachfront structure houses equipment, a bar with comfy sofas and a hammock, two friendly dogs and numerous kiteboarders sheltering from the blistering sun.

Standing on the pale sand, wearing a waist harness and a foam helmet, my back to the wind, I hold a horizontal bar tethered to my front with the kite hovering high above.

My instructor Cousha starts the drill: “We move the kite in infinity,” he explains, meaning that the figure-of-eight motion will help power me through the water.

After a few botched attempts, the gloves are off and Cousha is losing his patience. “Not like that, stop pulling the bar!” he yells over the wind. I’m taught to imagine the area in front of me as a clock.

If I want to move left, I pull the bar into the ‘power zone’ between 10 and 11 o’clock; to move right, I bring it between one and two o’clock; at 12, the kite sits in neutral. It’s not as simple as it sounds. 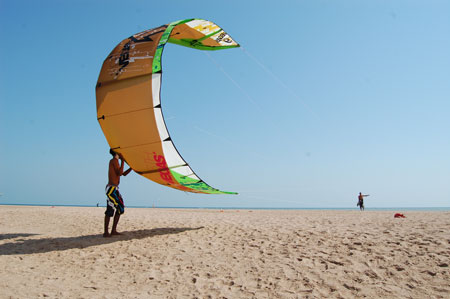 I spend the next hour wrestling the kite, while Cousha gives me a hard time when I get it wrong – which I do, often. But we soon develop a fun rapport, and despite the banter, I’m sure I’m improving.

El Gouna provides perfect kiting conditions for beginners and pros alike thanks to a gentle breeze for most of the year (April to November are the most reliable months) and 100-150m of warm, shallow water along the town’s 10km of desert coast, which ends in lush reefs and sand bars.

After my class, I’m introduced to Nemo, another RedSeaZone instructor who happens to be Egypt’s third-best kitesurfer.

He’s guaranteed a place in Egypt’s team for Rio 2016, where kitesurfing will feature in the Olympics for the first time. Nemo – a relaxed character with an obvious nickname – is testament to how far this sport has come.

Having spent hours in the water, I’m ravenous. Doaa, our straight-talking guide, takes us Downtown – with bazaars, boutiques, restaurants and plenty of shops, it’s a popular tourist hangout.

“We have a lot of retard here,” Doaa shouts over the music. “Polish retard, also German, English.” We all look at each other, and I’m not sure how to respond.

I open my mouth, then close it again, before I realise she’s saying “retired”. Relieved, we all fall about laughing. 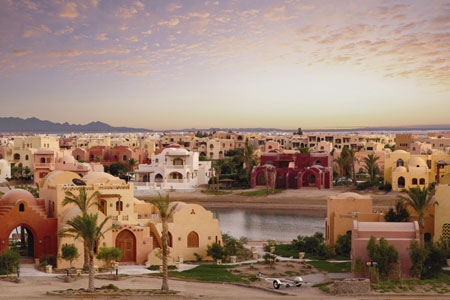 El Gouna comes alive at night; after working so hard in the water during the day, everyone wants to let their hair down. We’re not ready to call it a night, so we catch a taxi to RedSeaZone’s Monday night live music session.

Max, a British expat in his twenties with long blond hair, joins us. Having come here on a gap year in 2009, he fell in love with it and never went home.

“I came here as a divemaster, traded drum lessons for kitesurfing lessons and now I teach kiting here,” he explains.

Kitesurfing wasn’t part of the original plan for El Gouna. It was only when groups of keen kiters started turning up regularly that schools began springing up to accommodate them. Now the waters are packed with kites and a real community has formed around the sport.

The next day, I wake bleary-eyed and in need of water. But after a quick freshen up, I’m keen to get back out into the sea. “We’re going to try body dragging,” Cousha informs me.

This, I learn, is similar to Western movies when cowboys drag their enemies behind a horse until they die – and, yes, it’s painful. With a mind of its own, my kite repeatedly plummets into the turquoise water with an almighty splash, yanking me face-first into the waves.

I now understand why I was made to wear a helmet. I’m aching everywhere and I’m starting to flag. But Cousha shouts at me to get the kite back into the air.

I’m scared; I need to get it to three or nine o’clock before I launch it, but while I’m tugging on one line, it dances on the water looking like it’ll take off unexpectedly and whisk me away to Mozambique.

Finally, however, I have a breakthrough: the kite rises gently into the air, I relax and can feel – and, more importantly, can control each tiny movement of the wind in the kite as it hovers in the sun, like a majestic bird of prey. 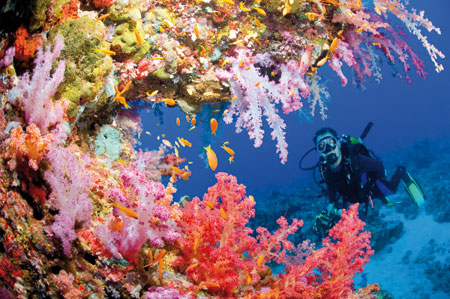 I daren’t breathe too deeply in case the spell is broken. I feel like the horse whisperer. Cousha says quietly: “You can feel the kite.” I can feel triumph.

Before our final session, my group persuades Cousha and Nemo to show off their skills. We wade out to a safe depth for jumping, away from the rocks, and watch them in their element in the bright morning sun.

They’re skimming the water, flying through the air performing board grabs, flips and turns with the brightly painted buildings of El Gouna hazy behind them, the mountains beyond, and myriad colourful kites overhead.

I’m suddenly brought back to reality with a jolt, as Cousha comes flying towards us, yelling: “Look out!”

He’s almost within touching distance as he takes off and arcs 180 degrees around us, two metres above our heads. I feel the adrenaline surge through my body – and that’s just from watching. Now I get why people love it so much.

Before jumping back into the water, we grab a top lunch in the swanky Abu Tig Marina area, in Club 88 (Abu Tig Marina North, tel. +2 015 0739 3572), perfect for a few beachside nibbles and fruity cocktails.

Then, inspired by the instructors’ expertise, many of us manage to stand up on our boards later that day – albeit briefly – swallowing what feels like half the Red Sea with each wipeout. But it’s worth it for the sense of achievement.

Buoyed by our success, we’re keen to celebrate tonight, so Doaa insists on taking us to a traditional Bedouin camp where we feast on Egyptian food – flatbreads, mezze dips and grilled meat – and watch a live show.

Tonight, bellydancers, a whirling dervish and a comedy horse keep us entertained while we suck on flavoured shisha and sip black tea.

It’s party night on Mangroovy Beach, so we ditch the cultural experience and go off in search of beer and cocktails, arriving around midnight as the music is pumping.

The RedSeaZone instructors are here, cutting some rather unusual shapes on the sand. I order a cocktail and chat to Cousha, who’s less intimidating when he’s not in the water.

In fact, he’s quite the charmer. “You are my best ever student,” he says, although it makes me question how much he’s had to drink, and how bad his other students were. 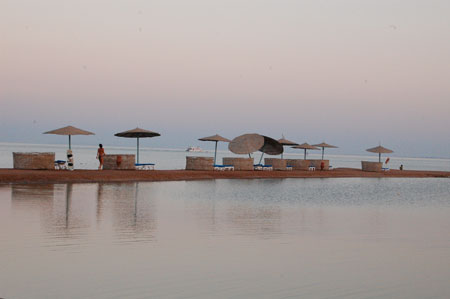 He explains many Egyptians, Nemo included, left London for Cairo to help their families during the revolution. And only now, he tells me, is there a feeling of optimism in the country.

Though the realities of Egypt’s revolution seem a million miles from El Gouna, the effects on tourism can still be felt – and seen – today.

There is one main gate for tourists which is guarded 24 hours a day, and the town has its own police force. I haven’t felt in danger here, but the high levels of security are a reminder of the conflict that is still going on in the rest of the country.

Standing at the bar, I strike up a conversation with Mia, a friendly New Zealander in her early twenties. She says: “I’ve been a Goonie [El Gouna resident] for about seven months. I think this place makes you a little bit crazy, but in a good way. People always come back.”

Staring up at the million bright stars in the night sky above, with the Red Sea glistening like warm treacle behind us, and imagining a life kiting, I can understand why.

Best of the rest: Watersports in El Gouna

There are plenty of other watersports on offer in El Gouna, so if you find kitesurfing too tough, try one of these other activities.

Three-hour day trips aboard 62ft catamaran Ocean Diva run 9am-12pm or 12.30pm-3.30pm, anchoring at a reef for snorkelling and swimming.

Two-hour sunset cruises are available, departing one hour before sunset, including soft and alcoholic drinks and canapés.

Take to the air parasailing for £24 per single 10-minute flight or £32 for a double flight, including up to an hour’s boat ride out to the parasailing site.

Wakeboarding sessions are 15 minutes, with one session costing £24 or three sessions at £22 each.

Scuba diving is immensely popular along the Red Sea, thanks to the teeming life in its salty waters. Emperor Divers offers a PADI Open Water course for £266.40. 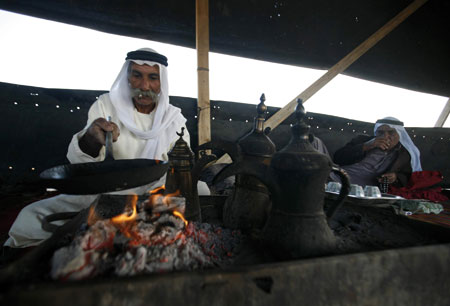 Egyptair flies from London Heathrow to Hurghada via Cairo from £465 return.

When to go: The best times to visit are April/May and November/December when the weather is cooler, but the wind
is still strong enough for kitesurfing. Winter is less windy.

Accommodation: Mövenpick Resort and Spa in El Gouna has accommodation starting from £90pn for a double room, which includes a breakfast buffet.

Class of the Week – space hopper

Claim Your Tax Back