The Times’ website was also taken down, possibly as a precaution.

LulzSec targeted the two News International websites last night, posting a hoax story on the The Sun’s website, saying that Murdoch had been found dead in his garden. 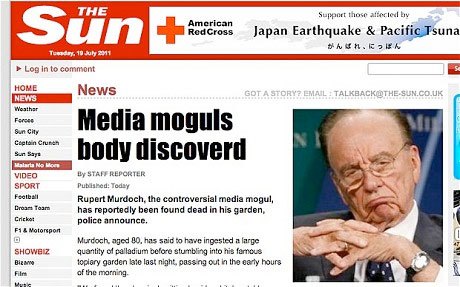 LulzSec hacked The Sun's website and redirected users to this hoax story, claiming that Rupert Murdoch was dead.

The fake Murdoch death story suggested that the News Corp boss had been found in his garden after he had "ingested a large quantity of palladium".

As the hacking drama unfolded, LulzSec posted a succession of cheeky tweets to their 300,000-and-counting followers, including: “This is just as fun on the inside. We are battling with The Sun admins right now – I think they are losing. The boat has landed…”

Later the hacking group tweeted: "Arrest us. We dare you. We are the unstoppable hacking generation…."

And: “Thank you for the love tonight. I know we quit, but we couldn't sit by with our wine watching this walnut-faced Murdoch clowning around.”

The Times website and the News International corporate website were taken down by the company as a precaution last night.

The hacking collective also claimed to be "sitting on their [the Sun's] emails" and said that they would release the emails on Tuesday.

“Time to get my sleep-deprived batshit insane ass off this twitter account before I find a car chase and start covering it again. Goodnight!”

BBC technology reporter Iain MacKenzie said: "Clearly this is not the most significant development in the scandal currently engulfing News International. But the turning of the hacking tables is, at least, curiously ironic sideshow."