The former Australian representative, who has also played with Canterbury, Sydney Roosters and North Queensland, agreed to a short-term deal on Wednesday.

“I am grateful that (coach) Wayne (Bennett) and the club have shown confidence in me to contribute to the club and I will not be wasting the opportunity to not only perform on the field but to contribute to the Knights’ strong community programs,” said Mason, who was raised in the Newcastle area and played in the Knights’ junior competition with the Toronto Scorpions.

“I am aware that I still have plenty of hard work ahead of me to earn a spot in the NRL team.

“It is great to be home and playing in front of my family, friends and the Newcastle community. I can’t wait to run out for my first game in the famous Knights colours.”

Mason will begin training with the Knights on Thursday and could play for the Newcastle NSW Cup team against the Illawarra Cutters this weekend.

The 32-year-old last played in the NRL in 2010. He played six English Super League games for Hull Kingston Rovers before being cut just six months into a three-year contract. 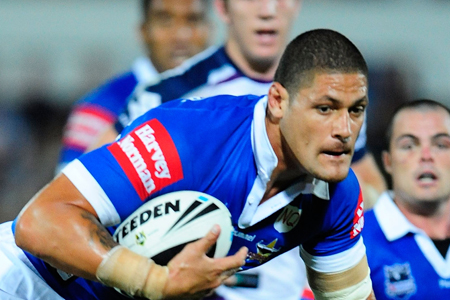 Mason has played 24 Tests for Australia and 13 NSW State of Origin matches and, in his prime, was considered one of the most damaging ball runners in the game.

But he also attracted his share of controversy and was involved in a number of off-field incidents.

After a scratchy 3-4 start to the season, the Knights, who have a solid backline set-up, were keen to bolster their forward stocks.

“We are pleased to be able to offer Willie an opportunity to re-establish his rugby league career back in his home town,” Knights CEO Matt Gidley said.

“Willie’s experience and physical traits will bring confidence to our current squad, particularly our emerging players for which we have very high hopes.

“This is another example of bringing local talent back to Newcastle and a philosophy we will continue to promote throughout our rugby league community.”