Montreal is freezing. Through my hotel window, I can see the January snow is at least a foot deep already and the sky’s a blur of flakes falling on the road outside.

The picturesque Old Town is covered in pristine, pure white powder. For the moment, the scene is almost completely free of footprints or car tracks – after all, who’d be mad enough to actually go out in this weather?

Plenty of people, apparently, because if there’s one thing I learn fast, it’s that Canadians don’t stop anything because of the snow.

They know how to ‘do’ winter properly – as they well should, since the temperatures here dip under -30ºC throughout the winter.

They dress properly for a start, in the kind of lightweight, hi-tech outerwear that looks as though it would keep you warm on a chilly day in outer space.

So unlike Londoners, who wear Ugg boots in the rain and count a hoodie under a biker jacket as a winter coat, you never see Montrealers shivering, even when the wind is howling and they’re brushing snow from their eyelashes.

I pull on my thermal socks and decide I’m going to learn how to have a good time, outdoors, in these inhuman conditions over the next few days – even if it kills me.

Hang out in igloos

The first stage doesn’t go too well. I stagger into the hotel lobby in Montreal to meet my tour guide, wearing a couple of long-sleeved T-shirts, two jumpers, a cardigan, coat, scarf and heavy leather boots.

I can hardly walk, but otherwise am feeling completely invincible.

When I meet Hugo, I have difficulty raising one of my chubby arms to shake hands. He looks concerned.

“Didn’t you bring any proper winter clothes?” he asks. I laugh, but quickly realise he wasn’t joking as we step outside and the wind whistles right through my layers.

Then wet snow soon starts seeping through my woolly hat. This is going to be an absolute nightmare, I think, as we bundle into a taxi – we’re off to have lunch in an igloo.

The Snow Village is open each year from January through to the end of March, and is made up of a series of huge igloos, which you can sleep, eat out, drink or dance in.

After checking out a couple, we make our way through a series of tunnels formed from densely packed snow before arriving in a huge dome – the Ice Restaurant.

Pink, green and blue lights illuminate the white walls, and it all looks a bit like Superman’s icy Fortress of Solitude (except, thankfully, with chaud cocktails, soups and hot sandwich wraps on offer).

Tables and chairs are made entirely out of ice cubes, lined with furry blankets.

I take a seat with a little trepidation, but weirdly, it’s not actually that cold.

The room holds a surprising amount of warmth inside, and so out of the wind and with the body heat of other diners, the temperature stays between -2ºC and -5ºC (that counts as positively balmy here).

Next door in the Ice Bar, a small crowd is starting to get through a fair amount of Jägermeister, which is served over an ice counter from bottles displayed on carved ice shelves.

In other words, with a hot meal and a bit of a booze jacket on, not only is this not excruciating, but this place is actually a total blast. 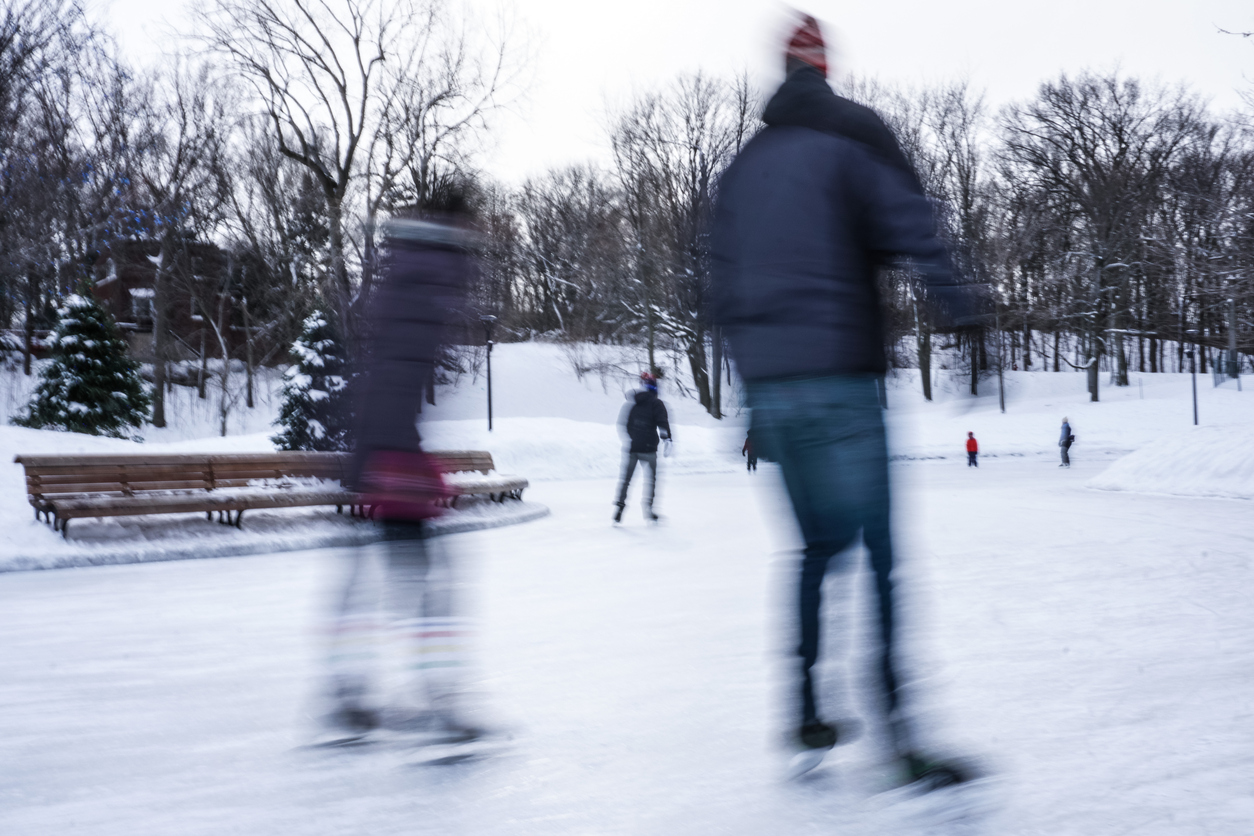 The next day I meet Montrealer Ruby Roy, who’s sporting a huge, luxurious red velvet coat and, in true local style, managing to look both fabulously glamorous and nonchalant about the cold.

“Montrealers like hockey, eating, cycling and arts, strictly in that order. If you don’t like hockey, we say, don’t come here,” she announces firmly.

Hockey here of course means ice hockey, and gradually I start to understand the full extent of the national obsession with the game.

You’d have to pull a lot of strings (and shell out big bucks) to get tickets to see a big ice hockey game in Montreal, but there are plenty of other winter sports going on all the time throughout the city.

One of the best and most scenic is the ice skating rink at the Old Port, where you can see the historic buildings of Old Montreal and the wide St Lawrence river.

This is an area which really shows its colonial past – the rink faces Bonsecours Market, which was designed by a British architect in 1844 and has a stately grandeur that reminds me of central London, while just behind, the cobbled streets and small, cosy cafes, jazz clubs and wine bars of the Old Town are oh-so Parisian.

The ice rink stays open until 10pm at weekends, and each night is themed, so skaters swish round to the likes of Wham! if it’s Friday’s Eighties night, or possibly some thundering Beethoven if it’s a Classical Monday.

As for the infinitely less skilled (but equally fun) winter sport of tobogganing, that takes place on Bois de Liesse Nature Park where there are two hills dedicated just for whizzing down.

The main reason why there aren’t any skyscrapers in Montreal is that they create wind tunnels, which would make the gusts here just too ferocious. 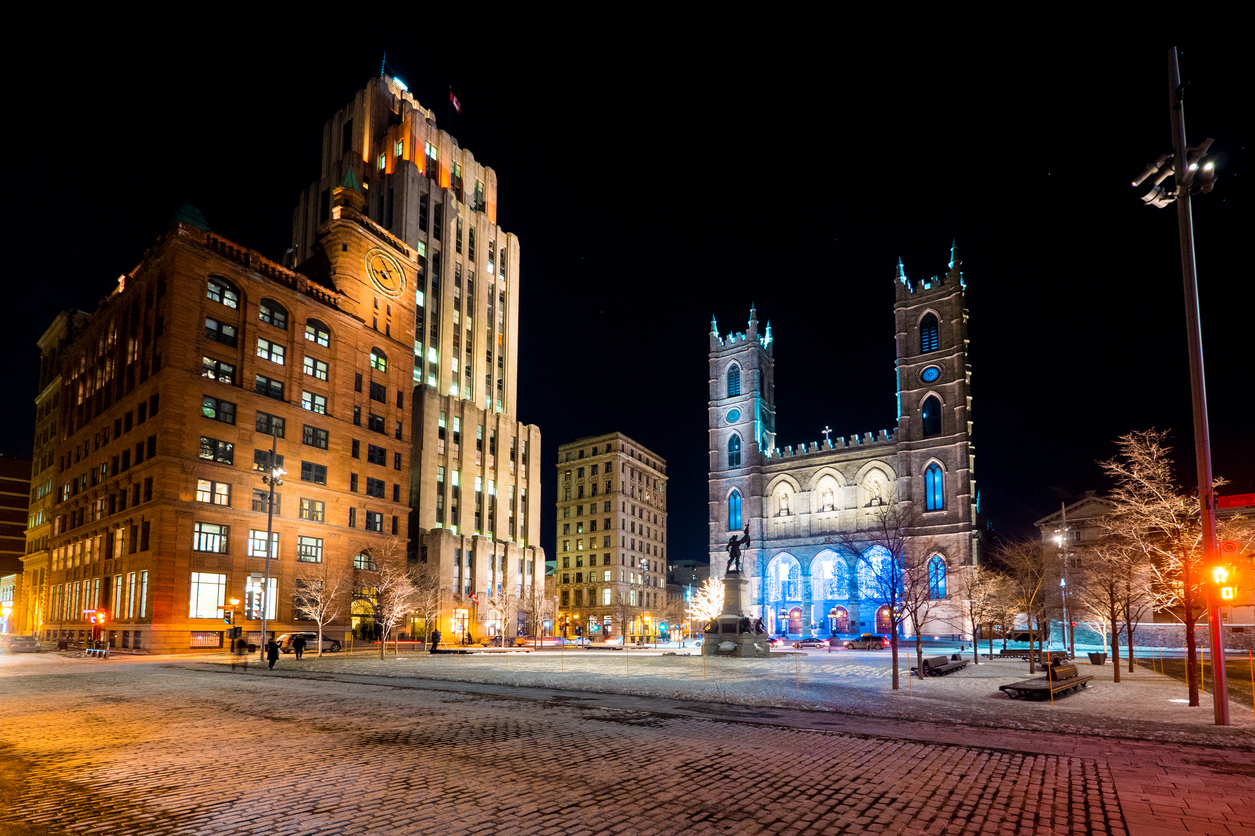 The evidence of this is plain in Place d’Armes, a square which I’m looking at from the comfort of Ruby’s car.

She tells me this spot is famous partly because you can see examples of every one of Montreal’s architectural traditions standing shoulder to shoulder, including the Gothic spires of the Notre-Dame Basilica cathedral and the red sandstone of the renaissance New York Life building.

But also, because of all these imposing buildings, it’s the coldest spot in Montreal. I believe it: the wind is picking up sheets of the light, powdery snow and flinging it in all directions over the square.

I decide to stay right where I am and to admire the views from near the car heater.

The only unremarkable structure, Ruby says, is the plain black building called 500 Place d’Armes. However, she adds, with a glint in her eye: “That one is where the firemen come to practice sometimes – and then the whole square fills with women and, I can tell you, that’s definitely the only building anyone’s lookin’ at then…” 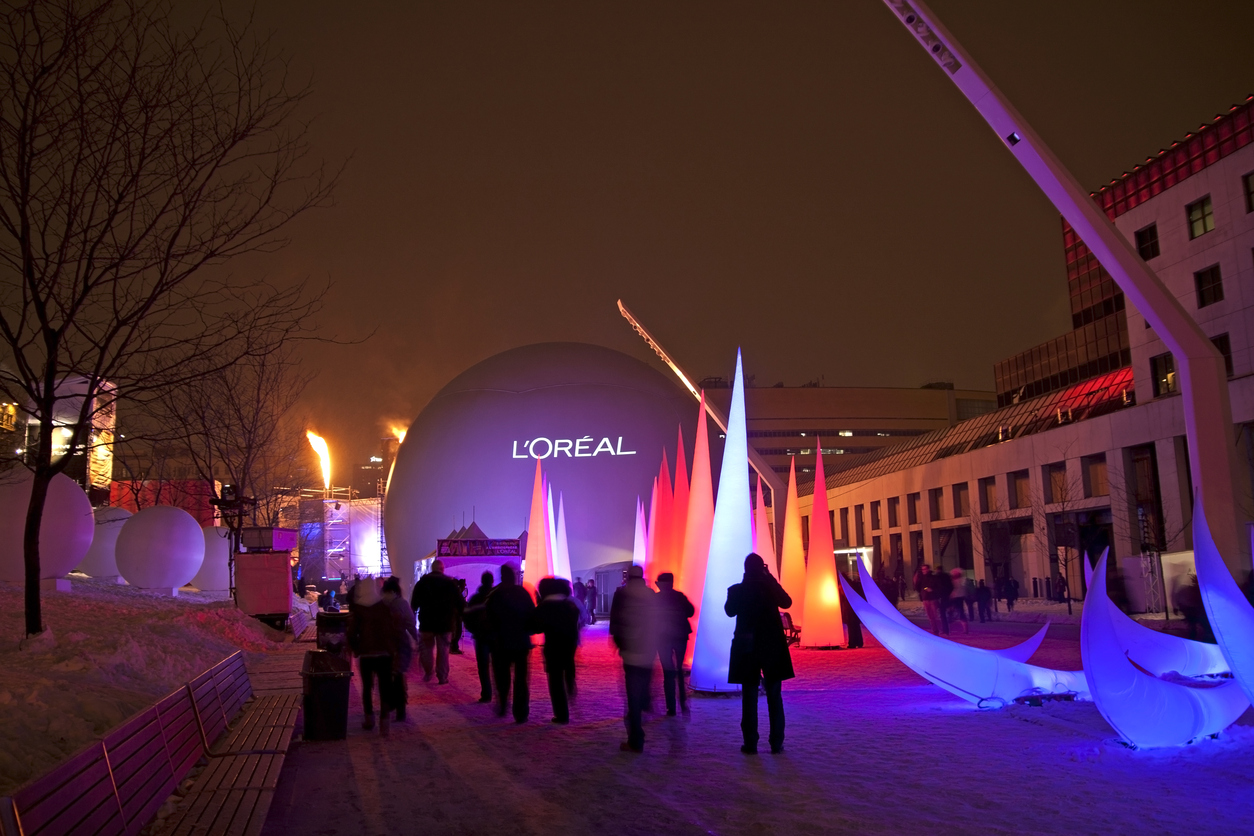 Living up to its reputation as Canada’s ‘city of culture’, Montreal puts on festivals all year round.

Huge winter event Montreal en Luminère is a cultural highlight, with theatre, gastronomy, dance and arts all on the programme.

Tonight, however, I find myself at a far more low-brow event – it’s basically an enormous rave in bobble hats.

Igloofest is held over four weekends each winter and essentially involves 10,000 twenty-somethings, all dressed up in the most retro ski suits they can find, coming out to dance in the snow.

The event’s production director Patrice Moïse explains: “Everyone wears the ugliest outdoor wear they can get their hands on – it’s become a bit of a challenge…”

There are two stages and plenty of bars to top up on Tia Maria, beer and Jägermeister, which seem to be the wintry tipples of choice here.

When the headline DJ comes on, the crowd starts going absolutely nuts, a sea of neon hats dancing, moshing and jostling.

People are crowd-surfing, sitting on each other’s shoulders and some, despite the cold, are even tearing their tops off, warmed by the heat of the crowd and probably a few Jägerbombs too.Moïse sums up the atmosphere perfectly: “The thing is, everyone gets pissed off with the cold in winter, but this gives you a chance to remember when you were a kid and you just loved going outside to play when it was snowing. Igloofest lets you do that again.”

So that’s how they manage to have fun in Montreal, when it’s -25ºC and seems like a constant blizzard for three months.

Take a tip from your five-year-old self, wrap up warm and, albeit in a grown up way, just get out there and play in it.

Helen travelled with Tourism Montreal  tourisme-montreal.org More on the Snow Village at  snowvillagecanada.com 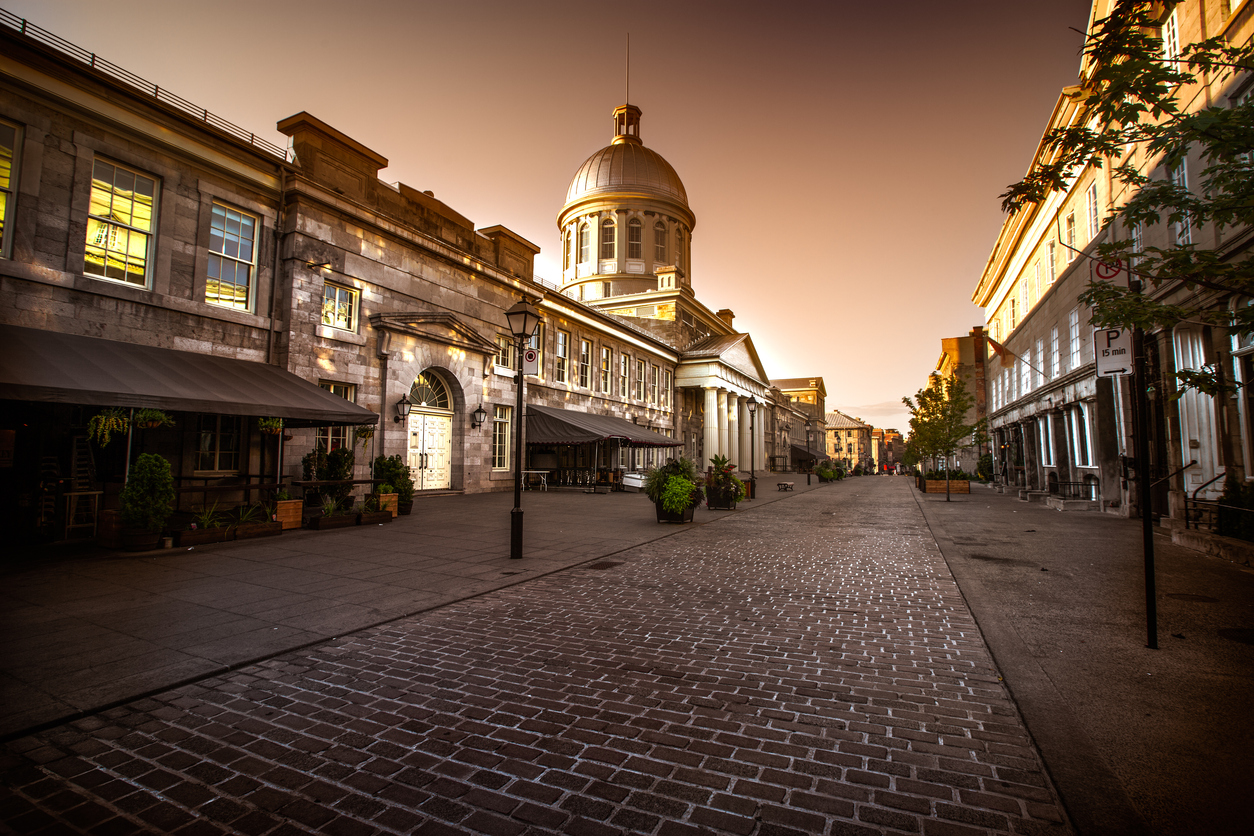 Fly from London to Montreal from £575 return.

When to go: High season is June-September, when it’s warm but humid. There are so many activities during winter that these months are growing popular for tourism too.

Accommodation: Le Saint Suplice is the place to go for a cosy, upmarket stay in Montreal’s Old Town.

The rooms are smart and homely, with faux log fires crackling away in many of them – perfect for when it’s freezing outside.

Planning a trip to Canada? Check out some of the hot deals over at tourndo.com

Running with the bulls