Where did Perfect Movie come from?

I took the advice “talk about what you know” literally. I had previously done shows about my love of VHS and was looking for a night that was different, so I decided on Perfect Movie, a stand-up comedy show about films that has become a multimedia event with games, sketches, trailers, interviews and movie recreations.

The David Bowie bit from Twin Peaks: Fire Walk With Me. The whole film is incredibly flawed, but that four minutes is amazing. It’s baffling and unnerving, funny and preposterous, too!

What film have you best reviewed?

A big part of the show is talking to audiences to find out what their favourite movies are and, according to my audiences, the most popular film is Back To The Future. I’ve have never met anyone who didn’t like it.

Which classic do you disagree with?

Mostly anything Ridley Scott has directed apart from Alien. I find his work a bit boring.

Which film’s not given its due praise?

I really like Alien 3. It’s a brilliant movie, full of tension, visual flair, great characters, great horror. And it’s full of brilliant British actors. I don’t understand why everyone hates it so much.

Are you an advocate of 3D movies?

It’s just an excuse to charge me £4 extra to wear glasses that give me a headache. It does go too far, there is talk about making the 3rd US Ring film in 3D – she’s already actually come out the telly, what more do you expect?

Disliking 3D is not the same as not wanting colour film or talkies, because that was evolution and progression, not an ill-conceived attempt to stop people downloading films.

Jonathan Ross or Mark Kermode – which critic speaks to you more?

I am a huge fan of Jonathan Ross. I have no issues with Kermode, but Ross is a genuine enthusiast of the weird, wonderful and cultish. Very few people would ever get a TV show and devote a whole episode to [cult filmmaker] Fred Olen Ray, but he did that.

Did you ever harbour ambitions to be involved in the movie business?

Of course. I think everyone that loves film would like to make them. Maybe one day … 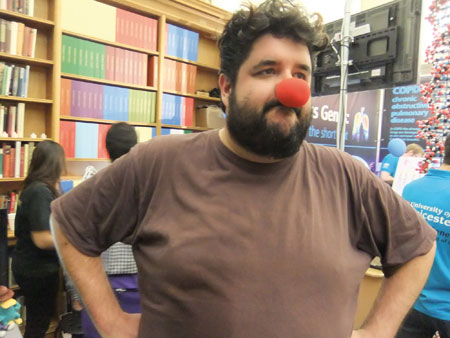 What was your first stand-up show?

It was at The Holyrood Tavern, Edinburgh, 2005. Just five minutes, and it went well, but I was so nervous beforehand, the whole thing is a blur. It wasn’t awful, but I didn’t do stand-up again for 14 months, so it can’t have been life-changing.

Other than movies, what else features in your comedy?

I talk about the reality of being considered geeky, being from Essex and racism.

Who is your screen idol?

Jason Statham. The greatest actor currently working in motion pictures, and I’m not being ironic. The man is awesome. He’s his own genre.

What was the last film you saw?

The overly long The Dark Knight Rises. It is the most violent screen version of Wind In The Willows you’ll ever see.

Does the British film industry’s cul-de-sac output frustrate you?

There are a lot of exciting movies being made in the UK at the moment that don’t feature housing estate junkies, gangsters or bonnets, so it is exciting to see newer talent moving away from stuff to sell to America and instead making films that are relevant to the UK.

It’s always hard to get a flick made, sold and then seen, so it’s an uphill struggle for everyone. Hopefully, audiences will support low-budget British films and the monopoly of unrealistic middle-class romances, mockney nonsense and bland historical epics can start to come to an end.

Is it ever cool to be a movie geek?

Yes, as long as you keep the blogger mentality under control and understand it’s all about love and while debate is healthy, sometimes it’s best to hold back, let things sink in and evaluate in private within your own mind.

The quickest, loudest or most obnoxious opinion isn’t by default the correct one. Remember: there is actually nothing wrong with someone disagreeing with you and neither of you have to be dicks about it.

Apart from movies, what are your other passions?

The pride of one’s home

Other traveller reviews on Thailand