My Big Fat Gypsy Wedding was watched by millions and “challenged” perceptions of Travellers. The final episode of pulled in more viewers than the Brit Awards, with eight million tuning in. Flamboyant dresses, bare-knuckle fights and strange traditions were just some of the sights on offer during the talked-about series. The Channel 4 Cutting Edge documentaries aimed to offer “a window into the secretive, extravagant and surprising world of Gypsies and Travellers in Britain”.

The audience lapped it up, intrigued by the alien way of life laid bare on their TV screens.

And the executive producer of the series, Jes Wilkins, was pleased with his lot, saying the show challenged many people’s prejudice against the Gypsy community.

So, as the curtains fall and the TV chiefs give themselves a pat on the back for drawing in huge crowds, everyone’s happy. Right? Not quite. Perhaps not unsurprisingly, the travelling community is disputing what was shown on TV.

It claims that Gypsy Wedding was nothing more than a snapshot into the lives of an extreme few, carefully choreographed to make good TV.

Shame in the Gypsy community

The Irish Traveller Movement in Britain is now asking C4 for a right to reply to the series, saying: “We are hearing every day distressing accounts from parents whose children are being bullied and … the deep sense of embarrassment and shame many have been left with by such a narrow, misrepresentative and unjust portrayal of their community and culture.”

The series focused on the Travellers’ strong family commitment and their tendency to marry young – on average at 16. After that, wives are expected to have families and obey their husbands.

But what most viewers were keen to ogle at were the clothes – the starkly coloured, meringue creations. However, some will be disappointed to hear not all Gypsies marry in such an extravagant way.

She tells TNT that TV bosses “went for a Sun-like approach” that would “sell magazines”.

She adds: “It heightens stereotypes and the Irish Travellers are very concerned. The programme has been sensationalist.” 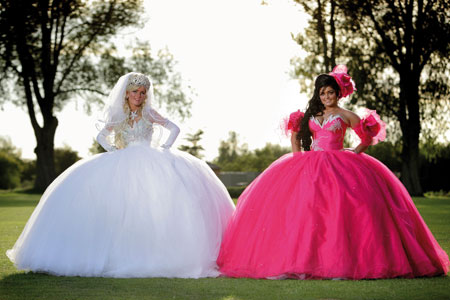 Travellers: no strangers to prejudice

Travellers are no strangers to prejudice, and are often the focus of social tension and scandalous headlines.

As always, there are two sides to the stories – the Travellers who want to protect their way of life, and those whose lives are disrupted by that.

So has the TV show been progressive in closing this divide? Gypsies are a legally recognised ethnic group, protected against the Race Relations Act. Yet, scour Twitter for comments in relation to the show, and the abuse is rife. @kerching says: “Whenever I see the word gypsy i think it says pikey thieving tarmacing bastard.” While @wo0 rants: “I don’t say gypsy. I say pikey. It’s preferred.”

“Pikey” is a derogatory term – and equality activists compare its use to that of the word “nigger”, which is obviously highly offensive in today’s society.

Rachel Brooks, of the Socialist Youth Movement, writes: “Although you would never see a sign on a pub these days saying, ‘No blacks, no Irish and no dogs’ you still get signs saying, ‘No Travellers’.”

The 21-year-old says: “There was no talk of the Traveller girls and boys that bring shame on their families, like me.

“I would like to see Gypsy Wedding show all sides to this culture.”

But Wormington says this is another extreme in the travelling community – and not a fair representation of all.

Just as the one-size-fits-all approach doesn’t work for the show, nor does it fit its critics. Richard Sheridan, an Irish Traveller living in Essex, couldn’t speak highly enough of the show: “It’s fantastic. It’s been the best thing since sliced bread. It shows our human side of Travellers.”

Whether Travellers get a right to reply to the show remains to be seen – but whether that would show their community in a better light is another TV show altogether.