My experience: turtle conservation in Crete

It came from nowhere, almost.

My second year of university was coming to an end and summer wouldn’t be far behind. I’d seen many of my friends travelling to what sounded like exciting parts of the globe and all I’d been doing was study. I needed to do something!

I hadn’t planned a solo adventure like this before…where do I start? I checked out some volunteering books in my local library and soon found a page on Archelon, the Sea Turtle Protection Society of Greece. This caught my attention as my brother had volunteered for them in the past and it had been a great experience for him. Pretty quickly I had made my decision. I mean, how often do you get the opportunity to save turtles, live the life of a traveller and gain some great life skills?

I sent my application off. In an immediate reply I received an acceptance email containing the information for my stay; I would be working in Rethymno on the northern coast of the island of Crete.

My first pointer towards the Archelon camp-site was the vision of a yellow Citroen Berlingo tagged with turtles and, to my fortune, the Greek for Archelon (ΑΡΧΕΛΩΝ) spotted through a gap in the bamboo-constructed tent shades. After this the campsite slowly emerged into my vision; many dusty tents were scattered over a dry plane surrounded by olive trees and washing lines and enlivened by the chirping of busy cicadas.

So I had arrived.

I was the only man out of nine volunteers…not bad for a first-time stay. I received a hearty welcome and was introduced to the camp with open arms; it took less than a night supplemented with cold Mythos to settle in. 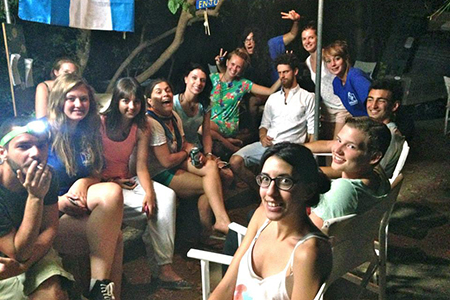 The campsite was riddled with typically iconic signs of travellers; hammocks, a dusty cooker, rusty bikes and cheap food cradled in plastic shopping baskets. Throughout my experience I was gradually introduced to the day-to-day jobs; firstly ‘morning surveys’…

The beach we worked on in Rethymno was around 11km long. Markers were set up across the whole beach by some volunteers a couple of years before, to make it easier to observe. Catching the sunrise as early as 4 o’clock suddenly became my favourite thing – the cool breeze and the sun slowly emerging behind the sea was the best. Each sector would usually be observed by two people each morning – a great way to interact with fellow volunteers.

As the days passed the routine sank in – it didn’t take long to adjust to turtle life. I knew how to track turtle marks, dig for nests and take down co-ordinates, well, to an extent, many of the long-time leaders still had many tricks up their sleeves. There was always more to learn. 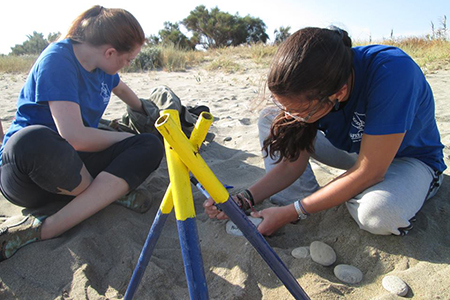 Unfortunately the Island of Crete – mainly Rethmyno – is highly populated with tourists, opening up a whole new can of worms for the volunteers. As tourism goes, it has often shied away from the green way of life, creating a major disadvantage for the turtles.

Another side of conservation was therefore added to the work timetable, which turned out to be the most important aspect of our job. We produced slide shows to many of the surrounding hotels – which were mainly populated by Russian, French, Dutch and German tourists – meaning I was safe as an English speaker… right? Definitely not! However it didn’t take long to adjust to a slow, more understandable way of speaking, as opposed to my usual sometimes rushed communication.

When applying for Archelon I’d  pictured myself seeing many turtles, however I was completely wrong;  I didn’t see a living turtle until my final two weeks. The first was during a release outside a local hotel. Many tourists gathered and it was great to witness, however it felt like something I could’ve just seen as a tourist.

The second was during a night survey, red torches, dark clothes and repetitively long walks up and down the beach. It took four hours, from 12pm to 4am to search one sector of the beach to hopefully find a turtle laying eggs. I was in a team of three, we were nearing the end of our survey after discussing star signs, complaining about walking, feeling tired, discussing why Germans call the saucepan star sign a wagon when suddenly, what looked like a large rock escaping the sea began to emerge from the waves.

A turtle came out seconds before we finished, it dragged its heavy body through the sand with great power to find a good spot to lay its eggs. We watched without a word for around forty minutes. It was one way to top off a truly amazing experience.

Film locations in the Peak District