Anyone who grew up in the Nineties need only hear the lyrics “tick tock you don’t stop” to feel a pang of poster-on-the-bedroom-wall teen nostalgia.

The intro into Color Me Badd’s most successful track, I Wanna Sex You Up, has the ability, not only hoist a cheeky smile to the face, but send one into a deep-breathing panic of cringe.

And now that the ‘Badd boys are grown up and have children of their own, you’ve got to wonder if their songs have endured these cringe-worthy tests of time.

Well, if you ask founding member Mark Calderon if his 17-year-old daughter is partial to a bit of vintage Color Me Badd, he winces, proving, like MC Hammer baggy pants and copper goatees, not all things owned in your youth will suit your fatherly 42-year-old self.

“No she don’t sing that song [I Wanna Sex You Up]. I get on her when she sings that one,” admits Calderon.

“But she loves all the songs from the Nineties and that just cracks me up.

“They know all the lyrics. So it’s not just the 30-40 year old’s that are touched by the music of the Nineties. It’s the kids of today too.” 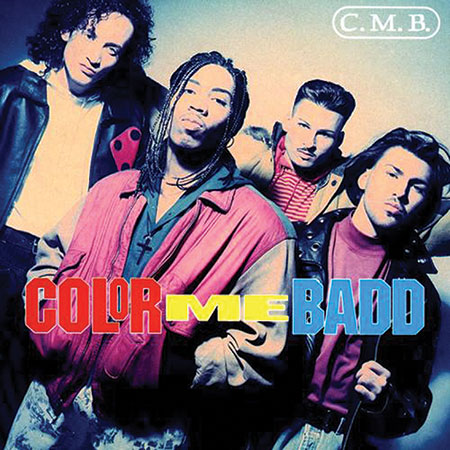 While the kids of today may not give a shit about Brendan and Brenda, or even know who they are, the music publicits will shout until the cows come home that old school Nineties nostalgia is at an all time high.

So much so that they have put together a ‘Made in the ‘90s’ show which will roll out in Australia next month bringing together some of the RnB genre’s most recognisable hit makers of the last two decades.

Acts like Shai, Jon B and Soul For Real will team up for a night of Nineties goodness. (Please note: that wasn’t just a shallow 90210 plug, Color Me Badd featured in an episode of the Beverly Hills’ drama.

If you’re interested, Kelly invites the band to Peach Pit after their concert to serenade Donna a capella style. Ah, Nineties’ TV…)

While there are only three of four members remaining in the band – Kevin Thornton, Mark Calderon and Bryan Abrams (Sam Watters is now a successful music producer), their enthusiasm is infectious.

With all the pressures of life, we just wanna give the people an escape.”

Big words for a band who haven’t had a top 10 single for over 23 years. However, they’re not without their merit. Their debut album, C.M.B, featured five hit singles, three of them top five.

They went on to release another four albums, the last of which was in 1998. Although this album, Awakening, caused only minor ripples, peaking at #48 on the US charts.

And while we’re not sure if they’ll still be sporting the silk shirt and jeans combo look, it is on the record that they will be busting out some new stuff. 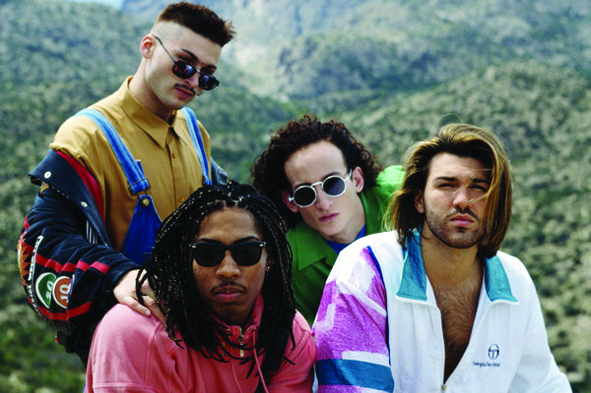 “We have a new single coming out, so we’re hoping to, not just maintain the fans from the past, but get some new fans too. It’s up-tempo, it has a lot of energy and we’re gonna have a lot of fun with it,” says Calderon.

Although it may seem like they’re jumping on the gravy train, Color Me Badd, who split up in 1998 and went their separate ways, say their reunion is less about the money and more about the fans.

And perhaps a sprinkling of the soul-searching question of whether or not they still ‘have it’.

“We noticed that people were really digging the groups of the Nineties and there were all these groups coming back from our era,” explains Calderon.

We’ve had a great response, and when we get on Twitter we get a lot of love and support from the fans.”

This kind of instant access to their fan base is something the boys could have only wished for as teens trying to break into the industry.

The guys seem almost envious of today’s reality shows that catapult young artists into the limelight.

“It’s such a world of social media now,” says Thornton, “it took us a long time, a lot of hard work and preparation to get to our fans, and even years to do some of the things that you can now in matter of seconds.

“If we had our time again we would have definitely utilised whatever form of communication that we could get our hands on.”

And while reality shows are churning out artists to a mass audience, these kids would no doubt be jealous of the ‘big break’ story that Color Me Badd wear with pride.

As Calderon explains, “Whenever the big acts used to come through Oklahoma City, we used to chase them down and sing for them on the spot.

“Whether they were walking out of their hotel or off their tour bus, we’d forcibly stop them and just sing.”

It took a chance, and somewhat ironic, meeting with RnB funk group Kool and the Gang to put Color Me Badd on the peripherals of the music industry.

“Kool and the Gang came through Oklahoma City, and they were having a party for all of the kids who had perfect attendance in school,” Calderon explains.

“Their slogan was ‘it’s cool to stay in school.’ But the problem was, none of us had perfect attendance. So we went ahead and skipped school so we could attend that party.

“We just started to sing and from there we spoke to their road manager who liked us and we had this long distance communication with them for a couple of years.

“We finally moved to New York City and we were able to get a record deal through that.”

Much cooler than Simon Cowell thrusting a bunch of pretty boys together I suggest – which launches Calderon into a boy band attack.

“Let me just say this about One Direction, they are great looking kids and I love their song, That’s What Makes you Beautiful.

But I have seen the guys perform on stage and I don’t see the choreography that I would like to see. Vocal wise, I don’t hear the harmonies that we used to have. But every era is different.”

Only with age, maturity and hindsight can a guy who once rocked an oversized neon blue suit and goatee take the piss out of today’s sugar coated, and hairless, boy bands.

But you know what? He has a good point.

Color Me Badd will play at ‘Made in the 90s’ with Jon B, Shai and Soul For Real. Sydney (Dec 1) and Melbourne (Dec 2) See: ticketek.com.au