AURORA AUSTRALIS
The Aurora Australis or Southern Lights are particularly spectacular in New Zealand.  It’s not unusual to see this natural phenomenon in New Zealand’s deep south, and this year has seen some of the most vivid displays on record. Auroras are electrically charged particles from solar winds that enter the Earth’s atmosphere and react with its gases. The result is a stunning light show, just as impressive as the more widely known Aurora Borealis. Soon the Aurora will be able to be viewed in all its glory – any day of the year –  from the Otago Museum’s new Planetarium, expected to open at the end of the year in Dunedin. Cutting edge technology is used to display the universe’s oldest secrets, giving visitors an immersive experience and a close-up view of Aurora Australis without having to brave the midnight temperatures.
HOW: The Aurora Australis is best viewed between March-September but the Planetarium, due to open late December, will be a year-round experience.  www.otagomuseum.nz 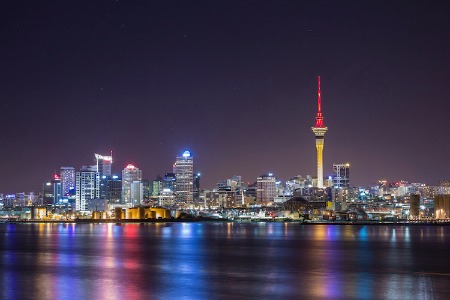 STARGAZE AT AORAKI MACKENZIE DARK SKY RESERVE
New Zealand is home to one of just five international Dark Sky Reserves, a protected area of land possessing an exceptional quality of starry nights and nocturnal environment whilst also preserving the visibility of the night skies. Head to Aoraki Mackenzie, a gold rated dark sky reserve, almost completely free of light pollution and located in the Mackenzie Basin in the stunning South Island of New Zealand. The 4300-sq km area includes Aoraki Mt Cook National Park, the villages of Lake Tekapo, Twizel and Mt Cook as well as the Southern Alps in the west and the Two Thumb Range in the east. Stargazing opportunities are endless, from guided tours of the solar system and visits to world-class observatories, to a visit to the world’s southernmost planetarium at the Hillary Alpine Centre.
HOW: Earth and Sky offers night time tours of the famous Mount John Observatory with the chance to see the Southern night skies through world-class telescopes, including the country’s biggest, which spans 1.8-metres. www.earthandskynz.com

SPOT THE KIWI
New Zealand’s most famous native bird, the kiwi, is nocturnal, so to catch a glimpse of these elusive birds visitors are going to need a torch – and some guidance on where to find them. A night tour at Wellington’s Zealandia Sanctuary is a unique experience wildlife fanatics will never forget. Zealandia is dedicated to telling a New Zealand conservation story, and the 555-acre valley provides routes suitable for everyone from wheelchair-users to regular hikers. The guided night tour allows visitors to explore the valley by torchlight while searching out some of the more distinctive sights and sounds of New Zealand’s bush. These include the high-pitched call of the kiwi, which can be heard across the valley as they forage for food on the forest floor as well as Tuatara scouring the bush for dinner.
HOW: The ‘Zealandia by Night’ guided tour starts from $39/£19 per child and $79/£38 per adult.www.visitzealandia.com

PADDLE TO THE GLOW WORMS
Just 10 minutes from Tauranga city, in the North Island’s Bay of Plenty region, is Waimarino Adventure Park on the banks of the Wairoa river. Focused on the recreational activity of kayaking, Waimarino takes guests on guided night kayak tours to see the ethereal shine of thousands of glow worms. Paddlers cruise across the calm Lake McLaren as they make their way toward the secret glow worm canyon. Tours depart once a day just before sunset so by the time visitors reach the glow worms they’re completely in the dark and ready to witness the natural light show.
HOW: The Waimarino Glow Worm Kayak Tour is $130/£63 per person. www.waimarino.com

NOCTURNAL HOBBITS
Hobbiton by night is a sight to behold. Hobbit holes are lit up as visitors make their way through the 12-acre property with a guide explaining how the movies were created. The night tour features a feast fit for a hobbit in the Green Dragon dining room. Ale and ginger beer from the exclusive Hobbit Southfarthing range is served with the banquet as guests get a taste of Shire hospitality. Following the meal, under the cover of darkness, the journey back to reality begins. The winding trails are illuminated by path lighting and each guest receives an authentic handheld lantern to light the way. The magical journey under moonlight travels back through the village which is breathtakingly lit up with smoking hobbit hole chimneys, music and lanterns glowing against the darkness.
HOW: Hobbiton is a two-hour drive from Auckland or a short 45-minute drive from Hamilton. Evening Dinner Tours take place twice a week on a Wednesday and Sunday evenings, starting at $100/£42 per child and $190/£92 per adult.  www.hobbitontours.com

CREATURES OF THE NIGHT IN ROTORUA
Canopy Tours in Rotorua recently launched a unique and thrilling night adventure. ‘Creatures of the Night’ departs at dusk and takes explorers on a guided zip lining tour through a forest. Here they will discover a world of insects unique to New Zealand including Weta, Morepork and glow worms. Standing on the highest platform situated 22-metres above the forest floor, guests can launch themselves into the darkness under the clear night sky for a truly unique flying experience.
HOW: Creatures of the Night by Canopy Tours costs from $140/£68 per personwww.canopytours.co.nz

Young mum called a ‘slut’ for breastfeeding her baby in public