Olympic torch makes its way to stadium on Gloriana

The torch is being carried along the Thames on a royal barge, the Gloriana, accompanied by a flotilla of more than 50 boats.

It’s the final stretch of the torch’s 70-day, 8,000-mile journey around the UK that will culminate in tonight’s opening ceremony in the Olympic stadium.

The 16 oarsmen on the £1 million Gloriana include several gold medal-winning rowers from past Games, including James Cracknell, Jonny Searle and Martin Cross. 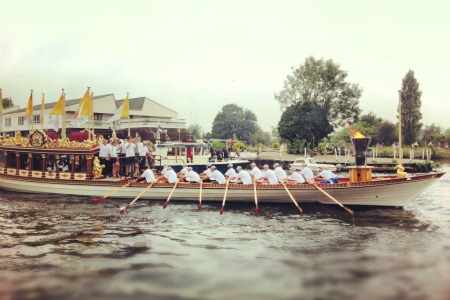 Nine torchbearers then ran through the grounds of Hampton Court before passing the torch to four-time Olympic gold medalist Matthew Pinsent, who carried the flame to the Gloriana.

Many spectators waded into the water to watch the flame handed onto the royal barge. 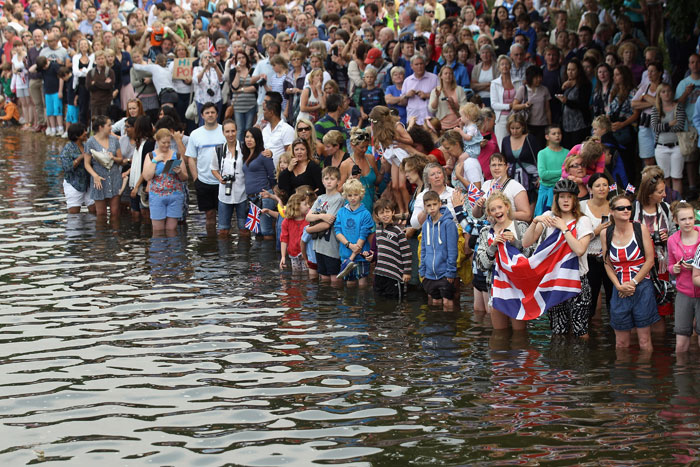 Spectators get soggy to gain the best view (Getty images)

Today’s final torchbearer will be Amber Charles, 22, from Newham, east London, who will carry the flame to Tower Bridge, arriving at 12.45pm.

The flame will remain at City Hall until it makes the final journey towards the Olympic Stadium and the opening ceremony.

Last night, thousands of people lined the streets of London to cheer the Olympic torch through as the Duke and Duchess of Cambridge appeared with the flame as it reached Buckingham Palace.

Boris Johnson told Sky News: “It is just sensational.. in the last two days it has all changed everything has come together.”

“You are seeing people who were really hostile and sceptical about the Olympics suddenly being infected by a bug, this benign virus of enthusiasm and they are enjoying it.”

Food with a view: 3 of the best rooftop restaurants in London