Almost half of London commuters are desperate for a change, unhappy and left wanting to go straight back to bed by the time they get to work.

According to a study of 2,000 people commissioned by evian, who are encouraging everyone to ‘Live young’ this January, more than one in ten Londoners (13%) describe their commute as being ‘like Groundhog Day’, but 33% taking the Underground feel better when transport staff are friendlier, 19% perked up when they managed to pick up a national newspaper, and 11% managed a smile when they won the race for a seat.

49% of commuters in the capital estimated they would achieve up to 30 minutes extra work in their day if their commute was more enjoyable, yet a whopping 43% admitted never actually doing anything to improve their route and have never made any changes to liven it up.

The study also revealed the top five things guaranteed to put a smile on a Londoners face during the commute – these included no delays, a smile from a sexy stranger, racing for a seat and winning, listening to their favourite music or a cheeky tannoy announcement. 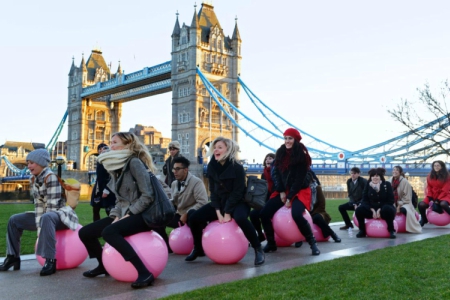 Drugs are bad: Winehouse and Russell Brand bring the message home to students

Visitors to Uluru could be banned from climbing on it