The parade takes place today, the 10th of September, starting at 1.30pm in Mansion House, east London running parallel with the path of the Thames before veering along the edge of St James’s Park and ending at the Queen Victoria Memorial at Buckingham Palace.

Around a million spectators await the parade, which includes 800 Olympic and Paralympic athletes from the British teams including Jessica Ennis, Mo Farah, Tom Daley, Jonnie Peacock and Hannah Cockroft.

A big screen has been set up in Trafalgar Square which will cover the route of the parade with running commentary.

Volunteers who gave their time for free during the Games as well as emergency services and military personnel drafted in to help with security get top seats along the edge of The Mall leading to Buckingham Palace.

“It promises to be an incredible afternoon but I do want to remind people coming that we expect the route to be extremely busy and planning ahead is absolutely crucial if they are going to be able to make the most of their day.” said Mayor Boris Johnson. 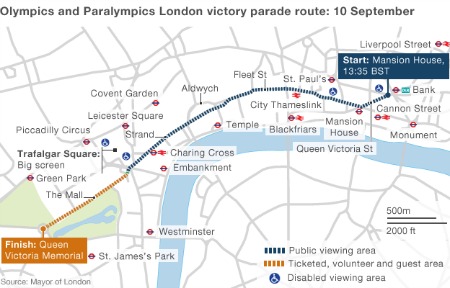 Image via Mayor of London

Video: Cats vs Mice… in space