It was an innocent survey to drum up a bit of interest in flights to the other side of the globe, but pitting Australia and New Zealand against each other as frivolously as Skycanner did last week doesn’t give the rivalry it’s deserved credit.

Beaches, winter sports, sight-seeing and nature are hardly the battlegrounds to pit the two against each other. There’s far more important things to argue about at the pub.

Kiwis are smart enough not to pick a fight on weather, economy or immigration policy – the first is a given. The second is more complex, as they’ll defend their home turf like a Kiwi protecting its eggs, but still desert it like droves of their sheep thanks to the Aussies’ open-door policy for the little bro to come over the Tasman to live, work and play for the Wallabies (cheers Mike Harris). A  bunch more are in the UK with us Aussies (hopefully reading TNT).

NZ PM John Key calls Oz a “giant sucking machine” for luring the Kiwis’ best and brightest, but if he meant that he’d take Russell Crowe back. Seriously, take him back. They lose their way trying to claim pavlova as their own. No one’s perfect.

Where New Zealand does get their back up is sport, as long as it’s one that they play, such as rugby (union or league), netball and select Olympic sports (like rowing). While Aussies get a bad rap for being chest-beaters, the Kiwis are definitely in the final.

Some would call it a chip (said differently in both countries but ‘spilt’ the same) on their shoulder, or even little man’s syndrome, as the smaller of the species needs to fight harder to get to the teet – I call it a tradition of banter and pride in their culture that, despite their country having the population of Sydney, expects them to excel on the world stage.

Fact is, Australia and New Zealand have a brilliant big-little brother thing going on. We fought in two world wars (Anzac doesn’t just mean the biscuits) and were in two Olympics (1908 and 1912) under the same flag. It’s a tight bond that shouldn’t be easily broken. But that won’t stop us pulling each other’s hair, calling Richie McCaw a scumbag or admitting Dunedin’s a better place for a ‘romantic escape’.

Agree or disagree? Is Australia better than New Zealand? letters@tntmagazine.com 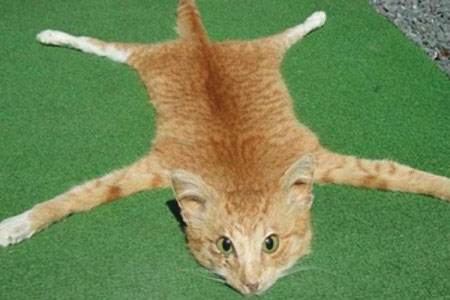 A cat rug? Wrong and hobbit-sized

It may be because I had an awesome ginger cat, a big fella called Oscar, as a kid, but making something that could have been someone’s pet into a rug is not on – the fact someone was willing to pay NZ$955 for it is even more off.

A New Zealand taxidermist preserved a ginger tabby he found dead, presumed wild or stray, on the side of the road and turned it into a tiger-style rug (see pic, inset).

He flogged it at auction website TradeMe as a “Large male in excellent condition. Beautiful ginger/marmalade colour with striking markings. Great little gift for the mancave!” Do hobbit’s have mancaves? It’ll hardly tie a large human room together.

Now I’ll be the last to strip off for PETA (you’re welcome), as I eat meat (the more humane the death the better but at 3am…) and wear leather, but the death of any being should be dignified. And the more respect shown it – whether in a burial or well-cared-for stew – the better.

How to succeed at auditions