Reports from journalists in the courtroom have said Pistorius looked “exhausted” and “emotional” at the court hearing this morning in Johannesburg, South Africa.

Pistorius’ Defence lawyer Barry Roux stated “the cold and unfortunate facts” that “all we know is that she locked the bathroom door and he shot, thinking she was a burglar”.

The prosecution suggested that the Olympic and paralympic athlete rose from his bed, fitted his prosthetic legs, walked 20ft to the door of his bathroom and shot four times through the door.

Roux has also asserted that the couple were going through problems in their relationship; “She did not want him anymore. She told friends: ‘I’m scared.’ She was getting messages.”

When defence lawyer Roux was finished, prosecutor Gerrie Nel said he was now “more convinced” that the shooting was a premeditated action.

Nel said Steenkamp locked herself inside the tiny 1.4m x 1.4m bathroom when she was shot through the door “It must have been horrific,”

“The broken door is important… She was there, she locked the door for a purpose, I’m not allowed to give you that purpose now.

“It was pre-planned up until the time that he shot her. If he felt bad after that, that’s something different.

“We don’t know what the accused was thinking, we have cold facts – two people in the house, one locked in bathroom…”

Legal journalist Karyn Maughan tweeted that Pistorius had been crying throughout the hearing. 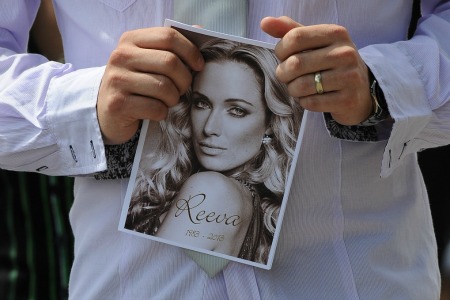 Paramedics arrived at court #OscarPistorius … While court is in short break – we don’t know why they are there yet. twitpic.com/c512nk