Over here the Grand National stops a nation, down under it’s the Melbourne Cup

At Aintree racetrack, just outside Liverpool, 40 horses thunder around the four-mile track, jumping 30 fences as they race to the finish, competing for an increasingly lucrative prize pool, which, this year is only slightly shy of £1m.

Like any great horse race, the National has its own peculiar folklore, its own esoteric litany of legends and intractable controversies. One need not be familiar with all the details to enjoy the race’s spectacle, but it might be nice to at least pretend you know all about it.

There is dispute over when the first Grand National was actually run – it moved to Aintree in 1839, but there was a race over the same distance run for three years at nearby Maghull. There is no dispute, though, over the man who founded it. William Lynn, the head of a syndicate and pub owner, set out a course at Aintree and built the grandstand. Like any savvy publican, he probably knew that a massive horse race could only be good for business.

Aintree has hosted the Nationals ever since, except for three years during the First World War, when it was relocated to Gatwick Racecourse, which is now occupied by Gatwick airport. Again proving their puritanical snootiness, some National experts refuse to recognise these three races, often leaving them off their list of winners.

The Grand National’s fences make it an unusually dangerous race for the horses involved. On average, three horses die each year during the three-day meeting, of which the Grand National is the centrepiece, and 76 have died during the race itself – including two, Ornais and Dooneys Gate, last year. These fatalities have made the race a target for animal welfare protests. Although they haven’t managed to have the race completely shut down, they have succeeded in improving the standard of trackside veterinary care and having some of the more dangerous obstacles modified.

One obstacle, Beecher’s Brook, an 8ft-wide brook with a fence set a yard in front of the water, has developed a reputation as the course’s most dangerous. It’s named after Captain Martin Beecher, who fell there from his horse during the first official Grand National in 1839, and hid in the brook to avoid injury.

Victory from the jaws of defeat and vice versa

Back in 1928, William Dutton, the jockey of a horse called Tipperary Tim, heard a heckler call out: “Billy boy, you’ll only win if the rest of them fall over.” The sledge proved prophetic as 41 of the 42 runners fell. On a heavy track, a major pile-up reduced the field to seven before the field was culled to three by the second-last fence. Then, remarkably, the saddle slipped off the leading horse, the second fell and Tipperary Tim romped home to unlikeliest of victories.

The reverse occurred in 1956 when Devon Loch had pulled away to lead by five lengths with the finish line in sight. But then, 40 yards from the post, the horse belly-flopped on to the turf and would not be coaxed into finishing the race. 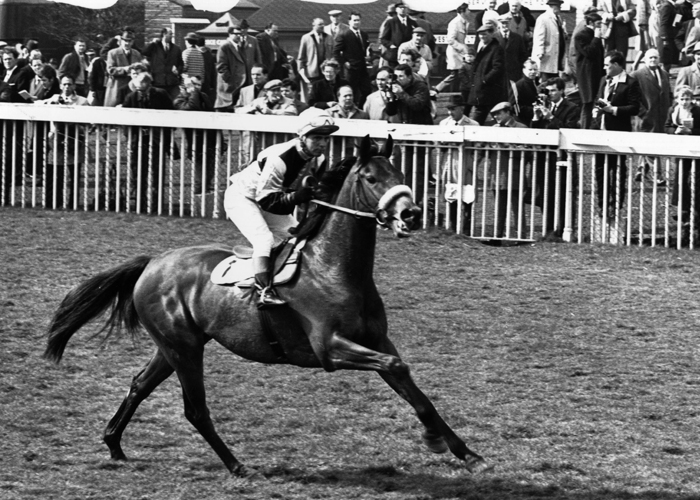 One of the most bizarre incidents occurred in 1967 when, on the 23rd fence, Popham Down, who had thrown his rider on the first jump, created havoc by wandering across the course into the path of those still racing. A frightful pile-up ensued  and some horses even starting running the wrong way.

Amid the confusion, a horse named Foinavon, who had been about 100 yards behind the leaders, was able to storm home. Foinavon had been at juicy 100/1 odds pre-race and his owner had had so little faith in his horse, he hadn’t even bothered turning up to watch. In recognition of Foinavon’s famous victory, the fence near the spot where the melee occurred named after him.

One horse, above all, is forever linked to the Grand National – between 1973 and 1977, Red Rum won the race three times and finished second on two other occasions. His first win was  the most dramatic – at the last fence, he was 15 lengths behind the leader but reeled him in on the run-in to win by a yard or so. Four years later, when he won the race for a third time, as a 12-year-old, he became the toast of the racing world.

He retired shortly after, but remained a national celebrity, being wheeled out to open supermarkets and his likeness appearing on all manner of merchandise. When he died in 1995, the story appeared on the front pages of the newspapers and, perhaps most significantly, Red Rum was remembered as a horse that helped the Grand National regain its relevance at a time when its popularity had dipped.

The race that wasn’t

A remarkable turn of events led to the 1995 race being stricken from the record, no winner recognised and the result declared null and void. The starting tape failed to come up properly, causing one jockey to become entangled. A false start was declared but 30 of the 39 remaining jockeys didn’t not realise and set off regardless. Officials did their best to stop the jockeys, running on to the track with red flags, but many dismissed them as protesters, who had become increasingly active in the preceeding years. Seven horses ran the entire race, ensuring it be written off. Even worse, the horse that went past the post first, Esha Ness, finished in the second-fastest time in history.

Keep reading for our blaggers’ guide…

As history shows, the result of the Grand National is hard to predict but there are a handful of stand-out favourites this year.

While Junior and Synchronised are among the early favourites, plenty will also fancy Ballabriggs, who was so impressive in winning the race last year. No horse since Red Rum in 1974 has won back-to-back Nationals but the Irish gelding is deemed as could a chance as any reigning champion of recent years.

In a neat piece of coincidence, Ballabriggs is trained by Donald McCain, the son of the late ‘Ginger’ McCain, the legendary trainer who looked after Red Rum before passing away last year.

“I love Aintree,” McCain said last week. “I have grown up with it but you couldn’t describe what it meant to Dad.”