Peru is home to epic surf and shamans

I’m tired. Dog tired. So tired, in fact, I think I’ll either break into delirious laughter or a torrent of tears. I’ve travelled 19 hours on a bus from Lima and slept less than two, due to the unfortunate reality that screaming babies aren’t banned on Peruvian transport.

As such, my humour was lost some time ago on Peru’s dusty Pan Americana highway – the only accessible route north into the province of Piura. But enough whining. From the minute I survey dawn’s pink sunbeams bouncing off the ocean, my faith in coming here is instantly restored.

I’m in Mancora, 1165km north of the Peruvian capital of Lima, considered the epicentre of the country’s surf scene. In nearby Chicama, sets of waves in excess of 4km long are created thanks to forceful southwestern swells that push through the Pacific – that’s up to five minutes of continuous surf-time. Strangely, though, this area remains largely off the international surf radar, even though it’s hosted some of the world’s best surfing talent in the past 30 years, including 2004 female World Champion Sofia Mulanovich, recent 2011 World Junior Champion Cristobal de Col and legendary 2008 Grand Masters World Champion Magoo de la Rosa.

Many argue the birthplace of modern surfing lies in Hawaii, but scientific archaeology – the process of analysing and measuring salt erosion on ancient artifacts to enable deeper understanding of how our ancestors lived – indicates that it actually evolved on Peru’s northern Pacific coast in Huanchaco, where pre-Colombian cultures used reed boats, or caballitos de totora, to surf the waves.

One man who helps serious surfers discover the best coastal spots is Marco ‘Pulpo’ Ravizza, a long-time surfer and tour guide whose specialist Octopus Surf Tours delivers the ultimate ‘off the beaten wave’ extravaganza. His trick, he tells me, is superior satellite forecasting for up-to-the-minute information on breaking swells and tidal shifts. But from Marco’s twinkly stare and obsession with the sea, I’m guessing it’s also a lifetime’s worth of intuition that lets him read the ocean like a second language.

Day one is a trip to Lobitos, a good all- round ‘warm up’ beach some 40km north of Mancora heading towards the large coastal city of Piura. Boasting an impressive sand reef break with long lefts, these year-round waves can reach 3m (10ft), so a good technique and strong paddle is essential. I’ve got the latter, not the former, so Marco pairs me with one of his ‘personal surf trainers’, Carlos – a sunbeaten 28-year-old local, who regularly spends nine hours a day surfing.

“One big mistake is catching the first wave,” Carlos advises, as we paddle over to 10 bronzed bodies, floating in the ocean like a silent tribe. “If you keep patient, the right wave will appear with your name on it.”

I’m told to tuck my tailbone in and go really low, like a snowboarder. It feels awkward – and great for my thighs. Like skiing, though, the closer to the ground and the further forward I lean, the better I own the board. A steady afternoon wind yields white horses from the south and indicates the arrival of some impressively high waves. Carlos feels my fear, breathes “muy tranquilo” in my ear, like a surf-whisperer, and tells me to sit on my board and absorb the ocean’s energy instead.

Heading back to Mancora town that night, we drop into the charming La Sirena (Spanish for ‘The Mermaid’). Run by local surfer and gourmet chef Juan Chi, the menu is a voyage into Peru’s renowned gastronomy with plenty of atmosphere to boot. I order a potent mango sour, then recline my aching biceps on to a retro red sofa in the cosy bar. 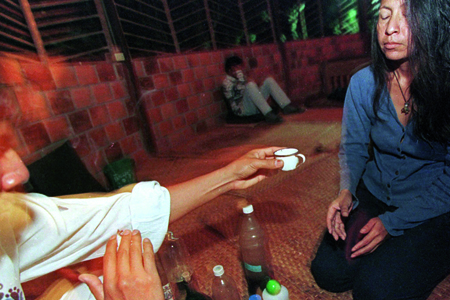 The next day, Marco drags me out of bed at 6am, bouncing off the walls from life – and caffeine? – and says: “I check with my friend. There’s huge tubes at Piscinas for two more hours. You like to see?”

Racing the 4X4 back down the PanAmericana, we take the turning off for Lobitos, hit a dirt track, then a sand dune and head into a desolate military facility requiring ID for beach access. We breeze through to join the other surfers, who skillfully glide through the barrels like bronzed darts. Marco turns to me and says, simply: “I live the really good life.” I don’t doubt it.

The good life, as it transpires, also extends to Mancora’s reputation as a backpacker party town. Perfect for kicking back after a hard day’s wave-chasing, the main street offers bars, eateries and entertainment for those craving a little aprés surf. I soon learn the nucleus of the small town’s party scene is at Loki, a large backpacker joint where 20-somethings mingle for hijinks and themed party nights with a similarly fun-loving bunch of nomads.

Knocking back pisco slushies and dancing to cringe-worthy Bon Jovi classics is fun – for a short time – and at 2am the party shifts gear as the hostel decamps down to the beach for ear-blasting reggaeton and a generous dose of Rihanna.I head home, however. For tomorrow is about a different kind of high; I’m off to visit Mancora’s resident shaman, Eloy.

Shamanism and the concept of healing the physical through a purification of the emotional is integral to Peru’s holistic identity. For thousands of years, shamans have been visited for their ability to help enhance an individual’s consciousness in order to heal a person from sickness, addiction and mental disturbances. The catalyst that drives this ‘awareness’ is a selection of highly hallucinogenic plants from the Amazon. In other words, shamans get people high. But the difference between these guys and your average London dealer is the drug they use is legal – at least in Peru. That, and it’s taken as part of a carefully controlled ceremony, not before a warehouse rave. 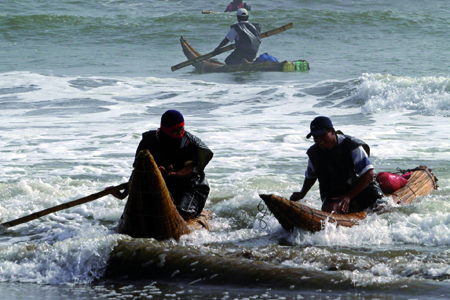 Cleaning out the static

Entering Eloy’s peaceful farmstead the next evening on the outskirts of Mancora, I’m racked by apprehension and nerves. But reports from others who’ve used the experience to free themselves from addictions, poor lifestyle choices and ‘clean their aura’ propel me to trust in the power of nature. You should detox for at least a week prior to taking ayahuasca. This means no sugar, meat, dairy, caffeine, alcohol or sex – stimulants are totally off the cards. I avoid telling Eloy I was out drinking rum until the early hours the night before.

Eloy sits two metres in front of me. We both drink a small half-cup of ayahuasca, then another, then one more. I wait. Over the next 30 minutes, the sounds that were so distracting to me before – the bees and bugs, the banging of a loose gate, the sound of the river gushing nearby – grow eerily quiet. Then I notice Eloy has lowered his head and is breathing deeply into his diaphragm. Involuntarily, I do the same. He begins a slow, soft chant that rapidly grows into an arch of noise. Eloy has become my other, beside me, behind me, beneath me. His energy is everywhere. I learn afterwards the chanting is what helps people ‘come up’. It certainly works in my case; I’m flying all over the place. I lose all sense of spacial awareness and can’t feel the ground.

For an hour, two hours, who knows? I watch the shaman, who hovers before me waving his hands in rhythmic circles.

“I see you as a television. I clean your static,” he announces, before guiding my hands upwards in a prayer position as the roof caves in and the entire garden – flowers, weeds, vines, butterflies and bees – soar through my fingers and make me gasp out loud. I’m then suddenly calm. The experience has been completely unique and that night, I feel totally at odds and disconnected from the party atmosphere of Mancora. My reflections come thick and fast, with one I can offer you. For those willing to ride the wave, Mancora will take your breath away.

Serve up a stein at Okoberfest