An animal rights group has released evidence of how baby elephants in Nepal are cruelly trained to give rides to tourists.

People for the Ethical Treatment of Animals (PETA) India released video footage and photographs taken during an undercover investigation showing elephants in Nepal being abused by trainers.

Elephants are taken from their mothers at the age of two, chained and immobilised and reportedly spend several days crying and struggling to get free.

The calves are then trained in order to give rides – this involves being hit and prodded with sticks and being subjected to loud noises. Flaming torches are brushed against the calves' faces, trunks, legs and bodies. The investigation also revealed that the animals' flesh is often punctured by the chains, restrainers and iron nails that are used to restrict their movement. 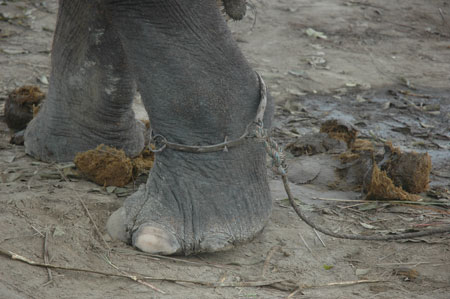 Many elephants have open wounds on their foreheads as a result of sustained beatings with sticks, while any attempts to retreat from frightening situations will result in further attacks.

An estimated 35,000 British tourists visited Nepal last year, many of whom will have unwittingly supported this treatment by taking elephant rides and paying for performances with the animals. The number of Brits travelling to Nepal is expected to rise as the Nepalese embassy in London continues its high-profile publicity

the flesh of baby elephants until the immobilised animals

bled profusely and screamed out in pain.

Discover the cool side of Zurich