Play in the park: London’s best places to live for a bit of parklife

Whether complemented with a pagoda or wild with woodland, they’re are all over London – and even better when on your doorstep. TNT looks at the best places to live for a bit of parklife.

Who lives there? Students (it’s got a university) and commuting city workers.
What about the park? Greenwich Park is a splendid, hilly sprawl that is one of the largest green spaces in London. It offers fine views over the Thames, Isle of Dogs, and the City. Its undulating nature means runners get fit very fast. Join the weekly 5km group run (parkrunorg.uk). The park is currently being colonised by the Olympic movement, with  the equestrian, plus running and shooting in the modern pentathlon, being held there.
Cost of a room in the area? About £500pm
Tube | Cutty Sark

Who lives there? Middle-class Brits, Antipodeans and British Caribbeans.
What about the park? Clapham Common hosts everything from music festivals to football tournaments, and is carpeted
with sun worshippers, and picnickers in the summer. It’s verdant, with a couple of ponds, and pubs and restaurants at every corner. Bonfire night here is insane. Why not try get your butt into gear with British Military Fitness (britmilfit.com).
Cost of a room in the area? About £500pm
Tube | Clapham Common

Who lives there? The young and stylish, including yummy mummies.
What about the park? Like the people, it’s pretty and well-manicured. It includes six all-weather tennis courts, a pitch-and-putt course, a petanque ground, a little nature train, an animal farm and a great cafe. It also hosts annual summer festivals. Beautiful, really (qpark.org.uk).
Cost of a room in the area? About £650pm
Tube | Queen’s Park

Who lives there? Young professionals, born-and-bred-Londoners, plus students.
What about the park? Victoria Park, a 15-minute walk away, is an east London gem, and recent beneficiary of a £4.9m makeover. It brims with flora and fauna, and the West Lake is still filling with ducks, geese, swans, moorhens and coots. For the active, there’s cricket nets and football pitches, tennis courts, a bowling green and a mini skating park. Festivals such as Lovebox and Field Day draw dance-music lovers from all over London. The park will host giant screens on which to watch Olympic events (londonlive.uk.com).
Cost of a room in the area? £400pm
Tube | Mile End

Who lives there? They call it ‘Nappy Valley’ for all the young families there. There’s also a smattering of celebs.
What about the park? Battersea Park borders the Thames, has a zoo, an art gallery, an athletics track and gorgeous gardens, plus a raft of sports facilities, including 5km and 10km running tracks. For entertainment, the bandstand hosts regular jazz concerts throughout summer. The park is hosting the Asia stage as part of the BT River of Music on July 21-22 (btriverofmusic.com). Get in.
Cost of a room in the area? £550pm
Tube | Battersea Park

Who lives there? A big Irish and English community, a bunch of Antipodeans, plus plenty of Polish people.
What about the park? Parks more like. Take your pick of Pitshanger Park, Lammas Park (ripe for a picnic with its enchanting gardens), Ealing Common (good for frisbee-throwing) and Walpole Park. The latter hosts a yearly, highly reputed jazz festival, and a comedy festival (ealing.gov.uk). Osterley Park and Gunnersbury parks are both ideal for long walks.
Cost of a room? About £450pm
Tube | Ealing Broadway

Who lives there? A lively Afro-Caribbean community, plus much more buttoned-down, middle-class types from Herne Hill.
What about the park? Brockwell Park’s annual Lambeth Country Show in September attracts people citywide (lambeth.gov.uk). The park has calm meadows around the south, and sloped football pitches over by Dulwich Road. It also boasts a BMX track, tennis courts, a free bowling green, a basketball court, a miniature railway, an open-air swimming pool and a gym. Take time to wander the walled garden and smell the roses, and look out for the occasional open-air theatre event, too.
Cost of a room in the area? About £330pm
Tube | Brixton 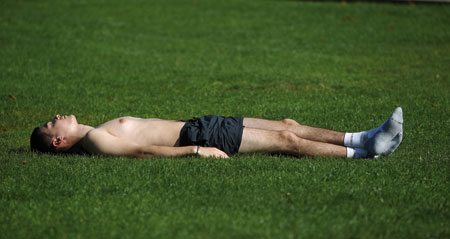 Ravenscourt Park, W6
A peaceful haven, off the beaten track. Its rich gardens and wildlife habitats create a feeling of zen. It features tennis and basketball courts, a tea-house, and it puts on a smashing fireworks display in November. Try your hand at cycling event London Freewheel (londonfreewheel.com) attracting 40,000 people, starting at this park.
Tube | Ravenscourt Park

Dollis Hill, NW2
A verdent lung in the heart of north-west London, Gladstone Park is an area of woodland with tree-lined avenues that criss-cross the green, a special duck pond, walled garden, cafe and bowling green. Each June it hosts Gladstonebury Festival (gladstonepark.org.uk) a showcase of food, music and other entertainment.
Tube | Dollis Hill

Finsbury Park, N4
A fine example of edgy, urban greenery, where the highly diverse communities that surround it, all come together as one. Home to the London Blitz American Football Club, it has a boating lake with ducks and swans, a running track, tennis courts and a small skate park. Enjoy a walk along the abandoned railway line – now the parkland walk nature reserve – to Highgate. Join the cycling club (finsburyparkcc.org).
Tube | Finsbury Park

Video: Aussie in epic Wheel of Fortune fail – if it’s not T could it be erm errr, T?