The pope is coming to Britain. That much you can’t have failed to notice. But why exactly is he coming, what does he want and why are people so upset about it?

Here are your answers at a glance.

Who is the pope?

83-year-old Pope Benedict XVI is Josef Ratzinger who, at 14, joined the Hitler Youth. He’s a distinguished academic theologian with unapologetically right wing views. In 2005, he took over the role as head of the Catholic church from his predecessor John Paul II.

Why is the pope coming to Britain?

It’s part of a PR campaign to revive Christianity in an increasingly secular Europe.

What will the pope be doing here?

Pope Benedict flies in to Edinburgh airport tomorrow and will be picked up in a custom-built, four-tonne modified Mercedes. The pope then hits Glasgow to take mass in front of 80,000 believers. He then flies to London to take several more masses and meet with religious and political leaders.

The pope will meet with David Cameron, Nick Clegg and Harriet Harman. 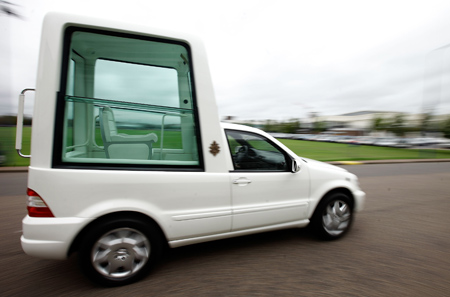 Why are people pissed off that the pope is visiting?

Protests against the pope’s visit will take place all week and celebrities like Stephen Fry and Richard Dawkin have signed a public letter saying Pope Benedict XVI should not be given a state visit during his upcoming tour of Britain.

In brief, these are the criticisms that people have made against the pope:

That he covered up the child sex abuse crisis that engulfed the Catholic church.

That he openly opposes equal rights for homosexuals.

That he opposes birth control schemes, such as condom distribution, to poorer nations, thus contributing to the spread of HIV.

That he opposes abortion rights for women.

That he refuses to admit women priests into the church.

People are also unhappy that British tax payers will foot the £12 million bill for the pope’s visit.

Protest The Pope rallies will take place every day from Thursday to Sunday this week. The biggest march will happen on Saturday September 18 at 1:30pm, to coincide with the pope’s mass in Hyde Park.

Sod that, I want a ticket to the pope show!

If you want to catch a glimpse of the pope, you need to buy a Pilgrim Pack which will contain a Pilgrim Passport and commemorative CD. Tickets for Hyde Park have dramatically undersold and are going for £5.