Prince Charles and Camilla’s car was attacked by student protestors last night as demonstrations over tuition fees led to violence.

The Prince of Wales and Duchess of Cornwall were on their way to the Royal Variety Performance when a group of angry protestors surrounded their car as it drove along Regent Street.

Student protests kicking off in London

Chanting “Off with their heads” and “Tory scum” the mob smashed a window of Charles and Camilla’s car, daubed it in paint and kicked the doors. 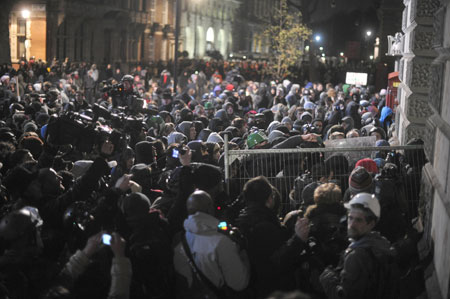 Protests over tuition fees became more frenzied after news reached demonstrators that MPs had voted to increase student fees. Some universities will now be able to charge £9,000 a year, almost three times what is currently allowed.

Pictures of Camilla’s shocked face made the cover of most British newspapers today but the Duchess was unharmed and appeared to be in good spirits soon after, telling reporters “There’s a first time for everything.”

Charles remained calm during the attack and was seen to push Camilla to the floor of the car to keep her safe. A protestor told Sky News: “Charles got her on the floor and put his hands on her.”

The Prince and Duchess of Cornwall were taken home from the Royal Variety Performance in a marked police van.

Watch raw footage of the attack on Charles and Camilla here.

The police have come under fire after the incident, as people ask why a car carrying members of the Royal family would be allowed to drive through the middle of a student protest.

However Scotland Yard chief Sir Paul Stephenson said that security measures had been in place.

“That was a very shocking incident…The route was thoroughly recced in advance, including up to several minutes beforehand when the route was still clear.

“The unpredictability of thugs and how they moved about the capital meant the protection officers were placed in a very difficult position.”

David Cameron said today that that attacks on Charles and Camilla were “shocking and regrettable” and said the protesters would “face the full force of the law”. 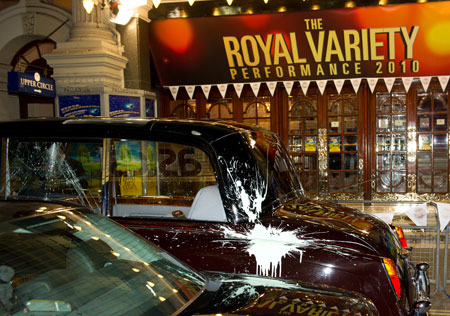 NZ under pressure to bat back