Racism Down Under: Is the Melbourne bus abuse clip a one-off?

Having been posted just last week by passenger Mike Nayna, who filmed the ordeal from the back of the bus, the clip has already attracted more than two million views and more than 20,000 comments.

It shows a group of five Australians hurling abuse at a French backpacker for singing a French song with three friends as the bus travels through the southern suburbs of Melbourne.

“Aussie, Aussie, Aussie” chants a woman passenger, before another shouts: “Speak English or die”, then threatens to cut off the victim’s breasts.

As the abuse continues, the tourists move to the back of the bus, while a passenger can be heard yelling: “I’ll fucking box cutter you right now doll. You’ve been told about four times, get off.

Everyone on the bus wants to kill you and you’re going to have to get off the bus eventually bitch, have you worked that out yet?”

A man pushing a pram then joins in, shouting that he would knife the backpacker, before getting off the bus.

Moments later, one of the vehicle’s windows is smashed, and passengers can be heard shouting to the driver to move on.

Nayna, a stand-up comedian from Melbourne, said the vehicle remained stationary for a few minutes before driving 500 yards down the road to a replacement bus.

He said he uploaded the video to try to “shame” those involved. 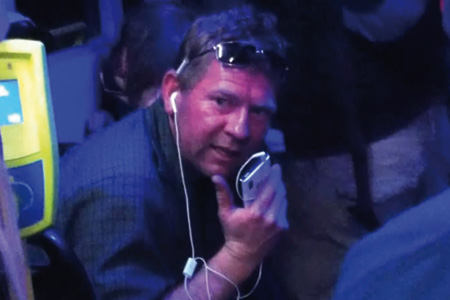 “Sadly this kind of stuff isn’t that uncommon,” he said. “I know I’ve copped my share for being brown and all my ethnic friends have a story or two. It’s a thing in this country. Let’s not pretend it’s not.”

Victoria Police have launched an investigation into the incident, which occurred at 10.30pm on November 11, and two people have been questioned in connection with the attack and released without charge.

But the YouTube video has already caused ripples around the world – putting the attitudes of Australians in the spotlight.

There are fears the country could be tarred with the racist brush, that it could damage Australia’s reputation overseas and affect tourism.

Laurel Papworth, social media expert, said the content of the video was an uncomfortable truth which Australians needed to address.

She told news.com.au: “It’s time for Australians to wake up. This is not a one-off issue, it’s a problem Australia has.
“Social media is lifting up the rocks and showing what’s really happening underneath.

Our reputation as being a light, friendly place to go for good times is changing and we have a darker soul we need to fight against, which is being highlighted by social media.”

Talking about sites such as Twitter, Papworth said: “Now Australians can see this is what people think of them. This is how they are perceived overseas: Drunk, racist yobbos.”

As the shocking story was picked up by websites and newspapers around the world, the Australian media didn’t hold back, condemning it as “disgraceful”.

In an opinion piece, Fairfax Media said the most disturbing thing was that so few people spoke up in defence of the woman. “The majority of passengers were silent and impassive, probably wishing they were elsewhere,” it said.

“A racist, abusive bigot is like sitting next to the smelliest person on the bus – you hold your breath and count the stops until you can get off.”

He told theage.com.au witnesses believe the perpetrator will turn on them if they speak out. “Speak to the rest of the crowd,” Professor Dunn advises.

“Say: ‘Does anyone else think that this is out of order?’ Try gathering support from other bystanders so that you turn it into a majority view. Make the perpetrator the minority.”

The incident follows the results of the university’s report into racism which revealed one in 10 Australians have racist tendancies – with some believing races should be segregated.

Australian psychologist Heather Grindley said: ‘‘We don’t have the attitudes of overt racism from 20 or 30 years ago but the undercurrents are still there.”

Despite the international outcry, many have been quick to defend Australia, calling the bus tirade incident a one-off.

Nayna, who captured the video, said: “I don’t want to look like I’m bashing my country, I love my country, I just want this to be talked about as there is an underlying issue going on her here.”

While Steve Noakes, a senior lecturer in tourism at the Central Queensland University told age.com.au there is no evidence such incidents cause a dramatic fall-off in the number of visitor arrivals.

Even the French victim who was verbally abused has come forward to say she doesn’t judge Australians over the incident.

Fanny Desaintjores, 22, said she had not experienced any similar demonstrations of hatred during a three-month trip around the country.

“It was an incident that could happen anywhere, even in France, so I don’t judge you in any country,” she wrote on YouTube in response to the video.

“We find idiots everywhere, even in France. I don’t want to fuel hatred or anything,” she added. Whether the actions of the perpetrators have, remains to be seen. 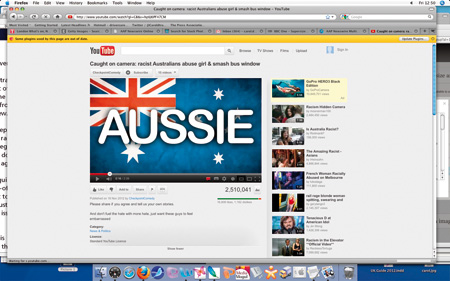 Unsurprisingly, social media users around the globe took to sites such as YouTube and Twitter in their droves to vent their opinion about the racist bus rant.

On Twitter: @luceasker: There are some disgusting people in this world.

@TaraNipe: This is not my Australia, but it exists.

Thousands posted on YouTube: Benstubes wrote: Unfortunately this kind of behavior goes well beyond the scope of this clip.

WestAusParty said: Australian-born people have to stick together, there are thousands coming here destroying our historical cultural values.

And on TNT’s Facebook page: Jamil Madrid posted: These types of people have no place in the world.

Jackqueline Hargreaves: Every country has a few who the rest of the population would like to disown.

Watch the video at tntmagazine.com/racist-bus and send your views to letters@tntmultimedia.com