As someone who lives within easy striking distance of Kings Cross, I always knew that it was only a matter of time before others started to see the allure of the area.

Once regarded as a no go destination, Kings Cross has – in recent years – begun to make a name for itself thanks to spiffy new developments such as Granary Square (humming as it is with cool places to eat including Caravan and the Grain Store), the arrival of Central St Martins and the gorgeous Great Northern Hotel (GNH) – a boutique property for stylish types who are tired of ‘traditional’ hotels where the rooms are invariably decked out in old fashioned florals and chintzy fabrics.

The recent launch off German Gymnasium  – a gorgeous eating and drinking emporium by D&D London (the owners of celebrated London restaurants like Le Pont de la Tour and Coq d’Argent) – on the site of a grade 11 listed former gymnasium designed by architect Edward Gruning in 1864, has only served to confirm that Kings Cross is cool. 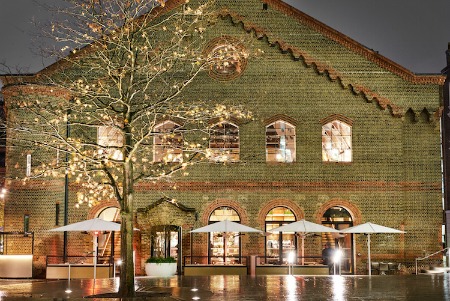 The restaurant, as you would expect, serves more formal food with prices to match meaning that, in the aftermath of an expensive festive season, we opted to eat at the cafe instead. 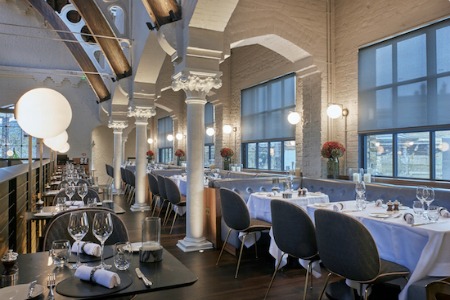 And we have no regrets for having done so. Almost every Mittel-European dish by German born executive chef, Bjorn Wassmuth, that we tried proved a delight. Standouts include the Beef goulash soup with bell peppers, sour cream and paprika and Pickled Bismarck herring with onion, apple and Vollkornbrot. There’s also a choice of German sausages –  such as Nürnberger Rostbratwurst or smoked Schinkenknacker, served with sauerkraut and potato purée or pommes frites – and sharing dishes such as roasted Creedy Carver free range duck from Devon served with braised red cabbage, dumplings and orange sauce to get stuck into.

For all that, it is possible to avoid meat should you so desire. The veggies in our group demolished their Schupfnudein and wild mushroom hand rolled noodles while the Seared sea bass was another hit. Whatever you order, wash it down with the German sparkling wine – bliss in a bottle. 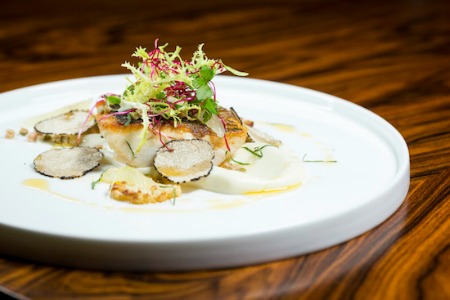 If you’ve got room – portions are enormous, so arrive with a hearty appetite – do try dessert. Black forest gateaux and Apple strudel are the obvious calorie laden, creamy treats to order at a German restaurant but it was the Poached spiced pear served with vanilla ice cream and chocolate sauce that had us purring with pleasure.

Smartly dressed staff, meanwhile, are utterly charming and have that a spring in their step that is the hallmark of a well-run restaurant. Case in point? Upon discovering that it was one of our party’s birthday, they suggested on sticking a candle in a cake and spelling Happy Birthday in hot chocolate sauce before serenading the birthday girl with a rousing chorus of Happy Birthday… Needles to say we all left a lot happier than when we first arrived…

You’ll also leave with a significantly lighter wallet for, unless your order carefully, the cost of dining here can be as breathtaking as the dramatic decor (think two freestanding staircases and gold mesh screens inspired by Victorian detailing and fencing masks), but the restaurant certainly ranks as one of the best German eateries in the city. 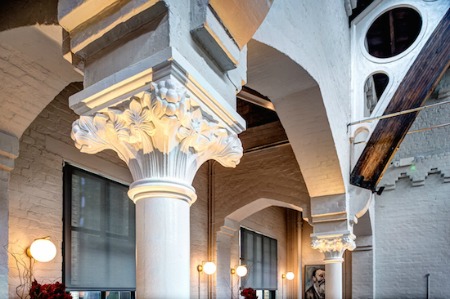 Bottom line? German Gymnasium may be a mere 25 metres from the Eurostar terminus at St Pancras International but you no longer need to travel to the continent for sensational German cuisine. Guten appetite!

It’s North vs. South in a bloody battle of roller derby action – get ready for Geordie Gore