As the party kicks off you’re sure things are about to descent into routine terrors of the flesh, only, as anyone who has seen the trailer will know, this film is anything but by the numbers.

From Joss Whedon, who subverted horror conventions with Buffy The Vampire Slayer, and partner-in-crime Drew Goddard – writer on shows such as Angel and Alias – Cabin takes this simple set-up but reveals, from the first scene, that something else is going on. Much more, in fact, involving a corporation with a deadly role in the aforementioned weekend’s activities. To give more away would be to spoil the show (the suited puppet masters are revealed in the film’s first five mins) but it’s safe to say you’d best expect the unexpected.

Never taking itself seriously, it’s a knowing and intelligent subversion of the horror genre. It is also incredibly funny, with some great gags (J-horror’s darkhaired girl terrors, for one), references to its monster line-up (vampires, zombies, hillbilly cannibals) as well as some lively dialogue, chiefly served up by the gang’s sage weed-hound.

Where it lets itself down, though, is in the characters, who never quite come alive in the way you’d expect from Whedon’s pen, and the fact that its big reveal is not as earth-shattering as it could have been. It is wrapped up in a smart package that will entertain and, most of all, surprise.

Good for: Having the rug pulled right out from under your feet 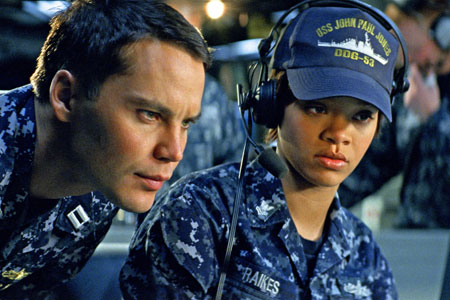 The popular board game in which you sink your opponent’s ships gets the big screen treatment (by Hancock director Peter Berg), with recent John Carter actor Kitsch, clothes-phobic popstar Rihanna and a truckload of mega-robot-aliens. Think Transformers with a different cast and no Bumblebee and you’ve pretty much got a handle on this blockbuster-season kickstarter.

On general release from Weds, Apr 11

London club: Martinez Brothers bring their legendary show to Fabric on May 11

Lady Gaga lands in London, heads directly to a chippy