It’s a tagline that couldn’t be more of an undersell for this little restaurant, tucked away in-between Dalston and Islington. The style? Not just French (as its name might have you believe) but modern European – hints of Nordic, German as well as our friends across the channel; inventive, bold dishes made from seasonal ingredients that leave the pass looking almost too pretty to eat.Salut!’s interior might look unassuming, with its pared-back wooden tables topped with tiny succulents – and it’s cosy, with just enough room for around 30 diners – but the fun is in its theatrics. The kitchen is totally open plan, meaning that depending on where you sit you can get an eyeful of the chefs at work (I rudely force my dining partner to switch seats halfway through so I can watch). We see them delicately piping sauces onto plates, blasting mousse out of whipped cream canisters, joking with each other. It’s completely fascinating to see the process behind each plate.

Founded by German brothers Martin and Christoph Lange (although the latter has returned to his native country after the initial run), Salut! is now under the command of head chef Otis Scase. Front of house-wise, it’s a family-run affair with a relaxed, friendly feel – throughout the staff are attentive and eager to help or recommend. They’ve selected mainly artisanal, sustainable producers for their wine list – and our waitress skilfully suggests a bottle of earthy Bulgarian red (Enira, Bessa Valley) to complement our choice of dishes. While the food menu is one of those nicely minimal ones; not sparse enough that you have no idea what you’re getting on your plate, but ambiguous enough for there still to be scope for creativity. 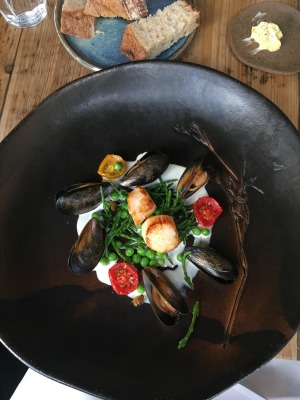 Often at restaurants bread is a bit of a nothing course; something to keep you from nibbling your napkin as sustenance. But here the bread basket is done right; they serve thick chunks with a dollop of creamy, truffle-dusted butter. A second helping magically appeared after we commented on how delicious it was!

Normally you think of a velouté as being served hot – it’s like a soupy sauce, right? – so it was a surprise to see two ice cubes bobbing around the sweet pea velouté starter (£9) placed in front of me, with swirls of rosemary cream and an edible flower. Almost like a non-spicy gazpacho, the cold velvety soup couldn’t have been a better accompaniment for the sweltering July day. While my date opted for the cornish scallops (£12), which were plump and juicy, surrounded by a cluster of clams, samphire, peas and tomato in a cream reduction.

There’s only four mains on offer but it’s still a tough choice; I go for the oak smoked Angus sirloin (£23), which comes with a spoonful of carrot puree, charred spring onion and a vegetable I couldn’t identify(!) but was faultlessly balanced, tied together by a glossy sauce. While my date opted for the Welsh wild boar (£22) sat next to huge, meaty girolles, broad beans, bacon and a hazelnut crumb – something I’d usually expect to see on a dessert, but it worked. 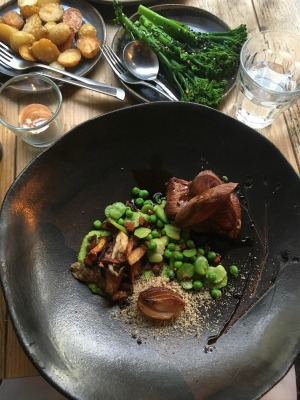 It might be a strange thing to like about a restaurant, but their unique choice of crockery (apparently made by Japanese-Brazilians and imported from São Paulo) provides a really unique canvas for the chefs’ creations – massive, dark asymmetrical plates that make the dishes’ bright colours pop.As the natural light fades and we move onto dessert, the space comes into its own – the kitchen is lit up like a stage, in contrast to the soft candlelight. I have the dark & white chocolate square (£10) which is paired with a light yet rich chocolate mousse and tart raspberries. The cheese board (£13), however, is the star of the show – with wafer-thin slices of crisp bread and a rhubarb & date chutney, the dairy on offer ranges from a mature Comté to a triple-cream cow’s cheese (Brillat-Savarin) to a blue and grey-marbled Bleu de Basques Brebis. The dessert wines on offer shouldn’t be overlooked, either (the Argentinian Moscato is 10/10).Salut! isn’t the kind of no-elbows-on-the-table fine dining, but that’s part of what makes it so appealing. Although it’s not cheap, you definitely get above and beyond what you pay for. And for the real test: you know a place is good when you’re recommending it to all your friends, and Salut! has passed that test with flying colours.

Fridays at The Night Cat

Glen Coe in the mist.