Occupying a corner wing and seafront terrace of the Hilton Metropole, next door to the iconic Grand Hotel and almost opposite the newly opened British Airways i360 tower (officially the world’s tallest moving observation tower and also the world’s first vertical cable car), it has just celebrated its second anniversary.

This place serves serious seafood to high standards but without any stuffiness or pretension. The friendly waiting staff wear jeans with butchers’ aprons and the relaxed, brasserie-style decor features lots of vintage copper lamps and exposed brick arches. It’s as suitable for a romantic dinner date or special occasion as it is for a night out with friends after having spent the day on the beach just across the road. 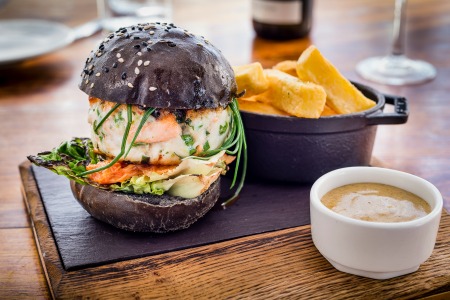 From the menu, which is helpfully divided into zones according to type, e.g. raw fish, whole fish, oysters, etc. (there’s also meat available but that would be missing the point here!), I chose a starter of mackerel with tomato, watermelon, feta and mint (£8). The surprising combination worked well and my partner loved her tomatoey fish soup (£7) with its squid ink, mackerel and rouille (a Provencal sauce made from red chillies and garlic). We also ordered two large and deliciously simple king prawns (£3 each) which were served on a bed of seaweed with garlic and basil mayo. Bread and butter rarely deserves a separate mention in a restaurant review but The Salt Room is an exception: the tasty homemade breads (£3) are accompanied by a generously indulgent dollop of whipped tarragon butter with Hawaiian rock salt and a pot of creamy crab mayo with the pleasing texture of taramasalata – a meal in itself and so good I was tempted to order it again and again instead of a main!

Sense prevailed, however, and I’m glad it did because my sea trout with crayfish dumplings and asparagus (£20) was well worth saving room for. The dumplings were slightly drier than I had been expecting but were flavourful nonetheless and my partner’s halibut with crab, verjus and pea purée (£24) was cooked perfectly and simply to preserve its finely delicate taste. Both fishes were outstandingly fresh and, because of this, there was no need to drench them in the kind of overpowering sauces that can sometimes mask the mediocrity of older offerings from less fastidious kitchens. To accompany, we shared a side order of Jersey Royal potatoes with mint butter (£4), along with an excellent bottle of Sancerre (£42) from the comprehensive wine and cocktails list.

To finish, there are plenty of tempting and more sophisticated desserts to choose from but, for a real seaside experience, we couldn’t help but fall for the ironic kitschiness of the ‘Taste of the Pier’ (£18 to share between two). Named after the old West Pier, whose crumbling remains the restaurant looks out over (tip: the view of it, as thousands of starlings swoop down at sunset to roost on its slowly decaying frame, is mesmerising), this showy but nostalgic dish features miniature versions of old-school British seaside favourites such as a jam donut, candy floss and a “99” ice-cream. 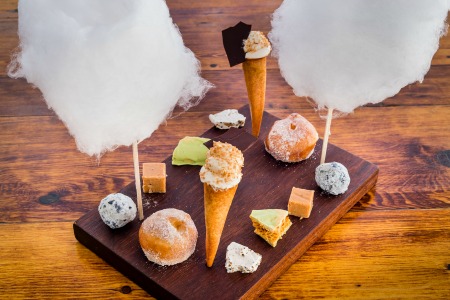 The Salt Room turns out excellent dishes made from fresh, well sourced ingredients that provide talking points for their taste and quality alone, without resorting to distracting gimmicks such as molecular gastronomy. It is one of two eateries in the city belonging to restaurateur Razak Helalat — the other being The Coal Shed, specialising in Josper-grilled steaks, which has also built up quite a following and is due to open a London branch right besides Tower Bridge this coming October, next door to another new outpost of The Ivy.

It’s the perfect way to round off a day at the coast before taking the quick train ride back up to Victoria. So good in fact that it’s worth braving the seaside hordes and the kamikaze seagulls on the walk along the prom’ just for a visit to The Salt Room alone. You’re never going to want cod and chips on the beach ever again.

On the nose: Socceroos coach Osieck sacked after back-to-back floggings, Vidmar takes over for Canada friendly in London