Riders on the dorm: Helpful hints for surviving life in a hostel

You can forge friendships for life or meet the kinds of characters you thought only existed in tabloid newspapers. Have a fitful night’s sleep due to the eight-man snoring symphony taking place in your dorm or, if you’re lucky, possibly never have to make your bed. If not, you’ll find that bed bugs really do bite.

Either way, budget, accessibility and the old backpacker rite of passage means a hostel experience during any travelling trip is inevitable. So, we’ve decided to offer you a healthy dose of hindsight…

Unless you were on the red-eye flight from somewhere heinous like Sarajevo, chances are you’ll be arriving during the day.

First things first, grab your sheets. Reception may have just handed you some still warm from the dryer but quilt covers are a different story. Apparently a shake and a re-fold is all that’s required to get these fresh again. Not your aftershave you’re smelling on there? Not surprising.

Then, there’s the room mates. Sharing with a complete bunch of strangers can be pretty daunting. People can be plain weird. Or boring. Or at least three times your age. Don’t worry though, chances are they won’t bite… Unless you ask them to.

Then there’s the general lack of privacy (which will be covered in depth later) and security. Part of me believes that if someone is going to rob you, they’ll manage it whether or not you have your case padlocked and your passport stuffed in a pair of socks amongst your dirty underwear.

Still, if you’re in the kind of place in which key cards need to be swiped at every door you can afford to be a bit more casual.

If your dorm door is permanently unlocked and more people seem to be coming and going than at a tube station during rush hour, try and keep them locked away. It’s called common sense! 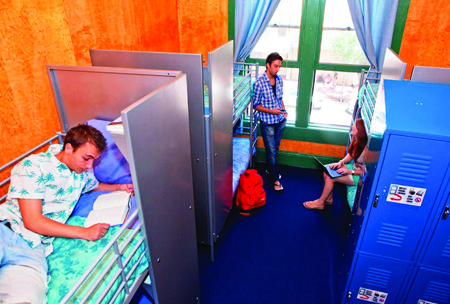 You’ve spent most of the day drinking cheap wine and sitting in the sun before hitting the nearest pub you could find and you’re ready to catch a few winks? You should think ahead.

Once upon a time, top bunks were an adventure. Sleeping a few feet above the ground was an opportunity you’d fight tooth, hair and nail with any sibling for. Now, all it symbolises is nighttime toilet trips proving even more of an effort and a climb greater than Mt. Everest at 3am after six or seven too many.

Bottom bunks are better value for money: there’s an unwritten rule dictating that the majority of floor space surrounding the bunk is automatically yours as well.

If you do, however, end up getting stuck with the top bunk, chances are it’ll have a railing so at least you won’t be flying out of your bed in your sleep. Always a plus.

“It’s got a swimming pool, a jacuzzi and I’m only paying $30 a night? Are you kidding me!?” Sometimes, if things sound just too good to be true, that’s because they generally are.

When you see the word ‘jacuzzi’ don’t immediately reach into your bag for your bikini or swim shorts. Instead, think of nakedness and random people’s bodily fluids.

The TV room is a different thing entirely, however. Regardless of bug infestations, lack of hot water and a kitchen stocked with a single fork, a great TV/film room can turn a barely livable hostel into a fucking brilliant one.

You may think every day backpacking is a cultural exploration but, really, a rainy day watching back-to-back episodes of Summer Heights High is sometimes all you need. If you’d rather avoid making enemies, remember to gauge general opinion before deciding to embark on a serious Harry Potter or a Twilight marathon. 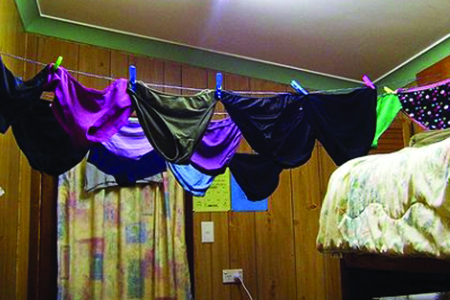 Your hostel kitchens can oscillate between the bleach-aroma cleanliness of a showroom (even if only for the short periods of time after housekeeping have breezed through) to the kind of cockroach-infested, mould-ridden scene that you thought you’d left after university. If you’ve found yourself in the former – hooray! If you’ve found yourself in the latter, Dominos do $5 regular pizzas on Mondays and Tuesdays.

Stealing food is frowned upon by humanity in general, not just the many warning posters blu-tacked to the walls. However, if someone happens to have left the majority of the previous evening’s takeaway on the free food shelf by mistake that’s not your problem.

Yes, even if it does have their name on the lid.

Attitudes to dorm sex are many and varied. Sometimes the overall consensus is that what wasn’t heard, didn’t happen, especially if general company are in fairly unrevivable goon-induced comas!

After time, it becomes not a question of the etiquette behind whether people should be getting down and dirty in, effectively, a public space (private rooms don’t come cheap, you know), but whether it’s disturbing fellow dorm-members’ sleep.

Therefore, just because you’ve managed to nab an extra sheet from laundry and artistically draped it over the bottom bunk like some poor-man’s four-poster bed, you don’t have permission to bump and grind through to the early hours. It’s not soundproof, nor does it make you two invisible!

If you must rut in a semi-public space like a pair of hogs in heat then use the bathroom! That way when you’re finishing you can just aim for a sink.

Roos’ newbies get ready to pounce