What unites a famous female icon, a footballer almost as insane as the late ‘mad dog’ Gaddafi and an innovative magical realist writer? No, Evita Perón, Maradonna and Luis Borges respectively were not all covered in maple syrup and chocolate bits at one of my striped pyjama parties; rather, they all help to define Buenos Aires, as it is where these three greats were born or spent an important part of their existence. And, who would not want to while away the hours in the Argentinian capital, with its alluring European-influenced architecture, unbelievably lush climate and swanky, eclectic night scene.

Originally founded in 1536 and situated on the southeastern coast of the South American continent, once I arrive in Buenos Aires, I really am the bull entranced by the matador. And it’s easy to see why, as this appealing metropolis is split into 48 barrios (neighbourhoods) that each have a distinct charm and feel. Whether it’s the district that is the geographical heart of the city, microcentro, which has a plethora of historic buildings and museums; the southeastern located old port region La Boca, with swathes of houses so bright and vibrant that you could believe it might have been the setting for the colour section of The Wizard of Oz; or Palermo, full of parks and exquisite gardens like Jardín Japonés, where it’s easy to find some of the this town’s three million porteños (locals) or sightseers strolling around tucking into delicious fried meat pastries called empanadas.

I wonder if someone is a kleptomaniac whether they have control over what they steal or they just have to take whatever they can grab. Well, whatever any light-fingered fiend or even regular shoppers want to get hold of, they’d be spoilt for choice in San Telmo on a Sunday. Why? That’s when the quaint, cobblestoned roads of this bohemian barrio spring alive because of one of South America’s most happening street markets. It is centred on the 300-plus stalls that make up the antiques fair (Feria de Antigüedades) in Plaza Dorrego, where hordes of tourists and locals purr over everything from rusty pocket watches to timeworn clogs, to vintage gramophones and fine china.

But the action does not stop there, as this extravaganza spills out into a more general bazaar along this neighbourhood’s main drag, the pedestrianized calle Defensa, and various other lanes. Here, I search for a bargain amongst mounds of clothes, knick-knacks and souvenirs like flattened champagne bottles, as clowns with painted faces, old crooners with guitars and other artists and performers create an atmosphere to die-for. In the early evening, Plaza Dorrego even hosts a milonga (a weekly dance get-together) where whoever fancies can try their hand at tango until the sky fills up with stars. 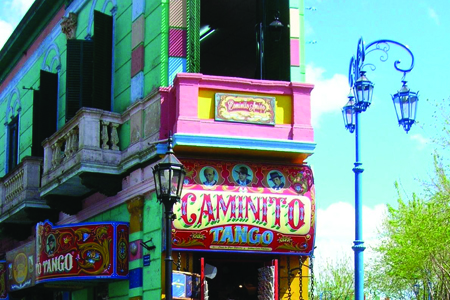 Snapping up a bargain

When you observe something from the bottom upwards, even the most rotund pair of butt cheeks can often look rather different. So, being fed up of normal city excursions that present the usual postcard-pretty, sanitised landmarks – think Paris’s Eiffel Tower or the pyramids in Giza – I opt for an Urban Photo tour (foto-ruta.com). Run by two talented snappers, Becky and Jess, my outing offers up a more interesting angle of Buenos Aires by taking in the truly eclectic barrio, Villa Crespo. Although ostensibly a well-to-do area with trendy outlet stores and designer bars and cafes, derelict industrial buildings, twisted car hulks and booze-addled vagrants highlight a gritty (but safe) underbelly.

But, before I begin my escapades, the two girls go through a quick introductory session about taking images so that we can improve. Furnished with this information about how to get the best out of form, silhouette and texture etc, we set out in groups of three or four to comb the neighbourhood and bring back the most engrossing shots. With the twist being, that these have to relate to ten oblique clues we are given, such as ‘driving me to distraction’ or ‘I’m a creep, I’m a winner’. Lots of my friends say that most of the pictures I usually turn out seem like they’ve been done by Stevie Wonder, but with my newly enhanced skills this is already not the case. The whole thing ends when we return back to base camp (a café-cum-antique shop, in this case) and view what we’ve produced on a large projector, over a glass of wine.

The next day I visit a building constructed in the 1730s that served as a poor house before it had several stints as a prison. Now a fascinating museum (Penitenciario), shanks – makeshift weapons utilizing razor blades and toothbrushes– in one display cabinet indicate a stay when it was a penal institution would have been about as much fun as a vegan being forced-fed a McDonald’s quarter pounder. This austere climate is further highlighted by the former convict’s stark accommodation: single cells no more than two metres across containing small metal framed beds, a thin dog-eared blanket and a simple wash basin and toilet. Yet, the men and women detained here undoubtedly deserved such miserable punishment.

Indeed, one exhibit illustrates the lengths some of these reprobates would go to get hold of drugs, smuggling them in in a tennis ball. Yes, instead of smashing the small yellow spheres around the court, these buggers got whacked on its contents. Surely something that would prompt a legend of the aforementioned sport, John McEnroe, to utter his most memorable phrase, “You cannot be serious!”

My other half often says that there’s more than a touch of the living dead about me when I wake up in the morning. But surely, that’s no excuse to be sniffing around others who have passed away in the early nineteenth-century built La Recoleta Cemetery. So, why am I here? To glimpse the tomb of this country’s most famous woman, Evita Perón. And what made her such an icon? Well, it definitely wasn’t because she had huge bazookas a la Dolly Parton or a fly wig like Tina Turner; no, she was the First Lady of the nation between 1946 and 1952 due to her marriage to the President, Juan Domingo Perón.

During this time, this beauty endeared herself throughout the land by supporting the poorest citizens – though perhaps it is odd that a penchant for wearing extravagant Christian Dior outfits, Cartier jewellery and other similar bling was not seen as an oxymoron. Nevertheless, such popularity led to a grave in the aforementioned 5.5 hectare burial ground, alongside other notable Argentinians like various former heads of state. And at the time of day I am here, this place really is a site to behold: sitting aside wide tree-lined main walkways huge mausoleums are smattered with angelic marble statues, elaborate bronze crypt markers and noble crosses that seem to vie for attention under a light blue sky laced with strings of cloud. 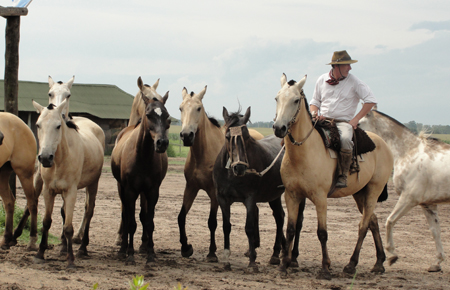 In Shakespeare’s riveting play Richard III the eponymous brute opines “A horse, a horse, my kingdom for a horse’. Well, after many years of trying, I finally have one, well, for half an hour at least.

I am ninety kilometres outside of the town centre at the splendid 1200 hectare ranch, Estancia Santa Susana. Red bricked and with white colonnades, this rustic colonial-styled Spanish mansion dates back to the 1850s. Now a museum, as with the nearby dining room (comedor), grill, gift shop and stables which are also in the same holding, it is immersed in a sea of green long grasses that are dotted with phone booth- thick palm trees. Back to my four-legged friend – it is also possible to get these lovely beasts to pull you about in a wagon – and the free ride; accompanied by a local guide, a gang of us head out into yonder across vast tracts of earth.

Of course, during this thirty minute jaunt, I am super-kind to my horse, as I don’t want to be thrown into a puddle or, worse still, a pile of crap I pass by that is so gargantuan it appears like it could only have come out of Godzilla. Later, I watch as real South American cowboys (gauchos) take over. They entertain everybody by demonstrating various skills in a traditional sport called carreras de sortijas (ring races). The art of this activity is to gallop on a steed and catch a wedding-sized ring that is suspended from a crossbeam. And all of the successes are greeted with ‘viva, viva’. During my stay here, another treat is an authentic asado-barbecue (beef, chicken, salads, desert and coffee). And, of course, there’s a dance, tango and music show.

In fact, you’ve guessed it, coming to Buenos Aires and not seeing a tango performance or actually taking some classes would be about as crazy as attempting to keep a great white shark’s jaws shut with a paper clip. Locals here really take this marvellous type of dance to their hearts, because it originated in the area of the Rio de la Plata (which is between Argentina and Uruguay) in the mid-19th century.

There’s an array of places to catch a glimpse of professional performers, such as the venue I chose, which is named after one of this craze’s greatest exponents, (Esquina) Carlos Gardel. And, as I depart from this awesome metropolis, in a surreal way I almost feel like it’s actually been my tango partner: she embraced and then seduced me, I was left in a spin by her mesmerising beauty, and then swept completely off my feet.

Jig on over: top Irish festivals