Creative quarters have burst on to the scene since a tough economy made cheaper rental space available to artists and musicians.

Boasting a long and illustrious history, Riga’s Old Town is loaded with buildings of varying architectural styles – from Baroque to Classicism, Renaissance to Art Deco.

Standouts include the 14th-century House of Blackheads, which used to be the most prestigious venue in the city. Destroyed during World War II, it was re-built in 1999 as an exact copy of the original. Local people were invited to contribute to the building process by buying bricks and then laying them.

Also look out for Three Brothers, a trio of residential houses, each from a different century, the oldest of which dates back to the 15th century.

A third of the city is constructed in the Art Nouveau style and the best examples of which can be seen on Elizabetes and Alberta streets. If you fancy getting your hands on some Art Nouveau merchandise, check out Art Nouveau Riga, a shop opposite the Riga Art Nouveau Museum at the end of Alberta Street, which stocks silk scarves with Art Nouveau designs, prints, jewellery and fringed lamps. 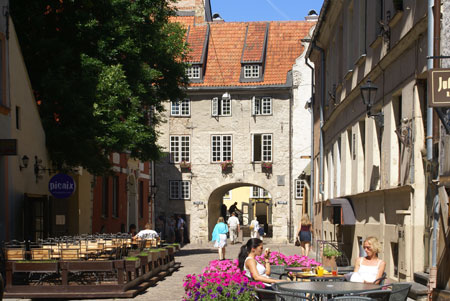 Latvian specialities include herring, flounder and trout, pearl barley and seasonal fruits. If you’re after fine dining, Riga has a surfeit of posh eateries, including Kalku Varti (kalkuvarti.lv) and Maja (restoransmaja.lv).

The city has plenty of tasty local beers to keep you sated, but also worth a try is traditional herbal liqueur Riga Black Balsam, which was created in the 18th century. As well as being touted as an effective cold remedy, this potent and bitter tipple is normally mixed with blackcurrant or cranberry juice or is added to tea or coffee. The best place to sample the stuff is the Black Magic Bar (since1752.lv) on Kalku Street, which serves up an array of cakes, chocolates and cocktails, all flavoured with the black liqueur.

Meanwhile, wine lovers will be dazzled by the selection on offer at hip drinking hole Garage, set within the fashionable Bergs Bazaar district.

The once-industrial Andrejsala district has burst on to the scene as an artistic hub. As well as housing the Latvian Museum of Naive Art, the area is a popular haunt for many of the city’s artists and musicians with festivals and concerts taking place regularly here.

For boutiques, vintage clothing and design shops swing by Miera and A.Briana. streets.

When to go: Summers are sweltering and winters are mild with few daylight hours.
Getting there: Fly direct with Air Baltic or Ryanair.
Getting around: Compact Riga is easy to explore on foot.
Accommodation: The Naughty Squirrel Backpackers Hostel, Kaleju Iela, in Old Riga, was ranked ninth in Hostelworld.com’s 2010 list of the 10 best budget hostels in the world (from £10). An attractive budget hotel is Albert Hotel (alberthotel.lv), which has a fantastic rooftop bar, Star Lounge, that offers fabulous city views (from £57).
Get more info: liveriga.com

The TNT Travel Show is coming!