Rihanna’s Man Down video has sparked fury over a scene depicting Riri shooting a man in the back of the head as he walks down the road, apparently in retaliation for raping her.

The Man Down furore has cast into the shadows the fuss made over Rihanna’s bondage-happy S&M video, and some groups are calling for it to be axed.

Man Down was broadcast on US TV network BET yesterday. This will possibly be the video’s only TV outing as pressure groups are now calling for Man Down to be banned. 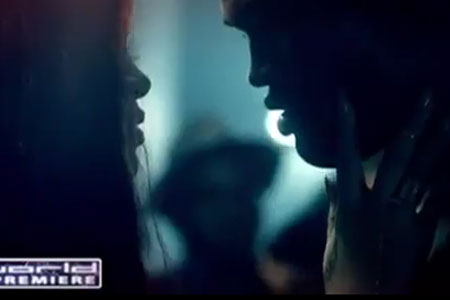 Rihanna meets her assailant in Man Down.

Paul Porter, co-founder of US pressure group Industry Ears, said that a video depicting an unarmed man being shot was unacceptable.

“If Chris Brown shot a woman in his new video, the world would stop. Rihanna should not get a pass. The video is far from broadcast worthy,” he told ABC News.

Even many of Rihanna’s fans have said that the Man Down video goes too far.

The Man Down video begins with Rihanna shooting a man in the back of the head as he walks down the street. He is seen falling to the ground and lying in a pool of blood.

The video then jumps to the previous day, showing a carefree Rihanna in the Caribbean where she rides a bike and frolics with children amid laundry drying on a line.

Later in the day, Rihanna is seen turning down a man’s advances. He then follows her and it is implied that she is raped. 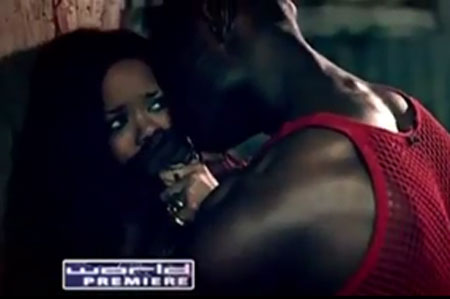 Rihanna is apaprently raped in Man Down.

Rihanna is defending Man Down, saying that it is a message to girls to keep themselves safe.

Referring to the violence she was submitted to by ex-boyfriend Chris Brown in 2009, Riri tweeted: “Very strong underlying message 4 girls like me! Young girls/women all over the world… We’re strong innocent fun flirtatious vulnerable, and sometimes our innocence can cause us to be naive!

“We always think it could NEVER be us, but in reality it can happen to ANY of us! So ladies be careful and #listentoyomama! I love you and I care!” 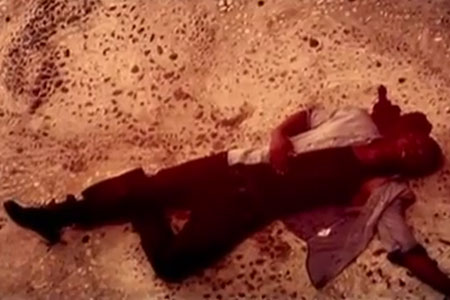 A man dies in a pool of blood after being shot in the back of the head.

However TV networks are wondering if Man Down can be shown at all.

A network source told The Mirror: “The lyrical content talks about killing a man and alludes to a rape, which is bad enough, but now Rihanna has played out the entire thing in a graphic mini-movie. It’s really too much to show on daytime TV.”

A Mothers Against Violence spokeswoman has slammed the video, saying: “Murder happens all around us. We need solutions, not songs influencing vulnerable individuals. Sadly, these kind of scenes are a reality for some.”

“She is a genius and it’s not about the obvious meaning, yeah okay she shot a man cause he raped her…but I think it’s more about empowering women cause some cultures women don’t get the same rights or aren’t treated right,” says ClaireTheresaWarner.

“Who gives a fuck if she killed a man in a MUSIC VIDEO. Its music, shut the hell up about and just listen damn,” writes MRsmallC00ki3.

What do you think about Rihanna’s message?

Whale-watching near the Isle of Mull, Scotland

Learn to bake at Marika’s Kitchen